The 10 Most Epic Hikes In Rio De Janeiro 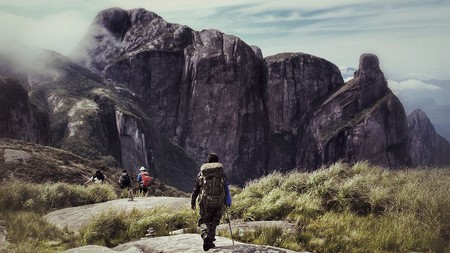 The large peaks and dense forest next to the coastline made Rio de Janeiro grow alongside nature, rather than urban development taking over. This has given Rio some of the most incredible hikes with jaw-dropping views. Remember to bring food and plenty of water as most hikes don’t have points to buy provisions or top up water bottles.

This has arguably one of the most beautiful views out of all the hikes with a panoramic shot of Barra da Tijuca, the west of Rio, Leblon and Ipanema. The hike is easy and only takes about 25 minutes. The top of the rock is flat and large, giving plenty of room to chill out and admire the view. There is a bus that goes from São Conrado to the hike entrance but most hikers get a lift there from the hang gliders that take flight from Pedra Bonita every day. 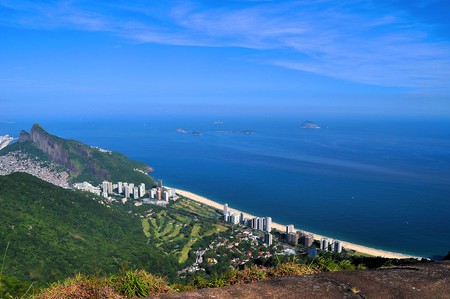 The view from Pedra Bonita | © Mcalvet/Flickr

This hike combines three adventures all rolled into one; a motortaxi ride which is hairy but fun, a journey through the favela Vidigal, and finally, the hike itself. The entrance to the hike is at the top of the favela so you’ll need to get a ride there. The hike itself takes about 40 minutes and is relatively challenging but, with plenty of viewpoints on the way up, it lessens the strain. The view is spectacular, looking over Rochina favela, Sao Conrado, Lagoa and the beaches of Leblon and Ipanema.

Pedra da Gavea, being that little bit higher and closer to the shoreline than Pedra Bonita, manages to excel in viewpoint terms, with breathless views over to Barra da Tijuca and Recreio at the back, and towards Leblon, Ipanema and Copacabana from the front. It’s a challenging hike which takes around two and a half hours to reach the top and requires hikers to be in relatively good shape. One part of the trail demands actual climbing and it’s recommended to use ropes. Usually, there are people there with ropes that tend to be willing to share them, but it’s not a guarantee. 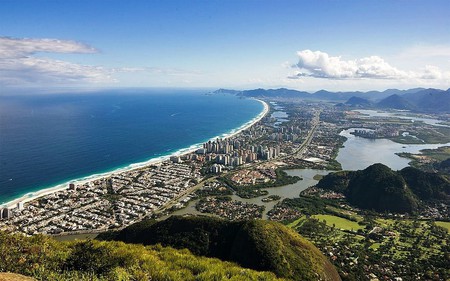 Morro da Urca is the small peak before Pão de Açúcar (Sugarloaf mountain) and the top is accessible by an easy 25 minute hike. The views at the top look right out over Botafogo and Niteroi and there are also several restaurants and shops at the top for lunch, snacks and drinks. Expect to see monkeys on this hike, especially at the base of the peak where their curiosity let’s you get close to them.

Probably all Instagram and Facebook users that live in Rio de Janeiro have seen the typical photo taken from the top of this hike where hikers appear to be dangerously hanging off the ledge into what looks like an enormous drop below. Luckily, there is a ledge below and its all about perspectives, yet that doesn’t stop dozens of people hiking up to the top each weekend to take some great pictures there. The hike itself takes about 40 minutes and is relatively easy. 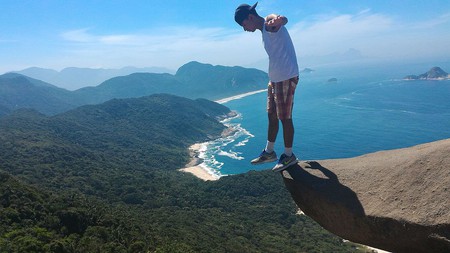 Cachoeira do Horto (Waterfall of the Garden)

Right in the middle of the Tijuca forest, it’s hard to believe this beautiful waterfall is in the heart of a large city. The hike to reach the waterfall is relatively flat with just a couple of parts where scrambling rather than climbing is required. It’s one of the easiest hikes and takes about 25 minutes. The waterfall is small yet tall enough to take a cold, refreshing shower with a natural pool in front. On the weekends it can get crowded, but head there during the week for total peace and tranquility.

This is the highest peak in Rio and takes about two and a half hours to climb up to the top. Despite that, it’s a relatively moderate climb and is well-signposted. There are also plenty of wildlife along the way such as butterflies, birds, monkeys and lizards. From such a high viewpoint, it’s possible to see a 360 degree view of all of Rio including Lagoa, the Christ the Redeemer, Maracanã and Niteroi. 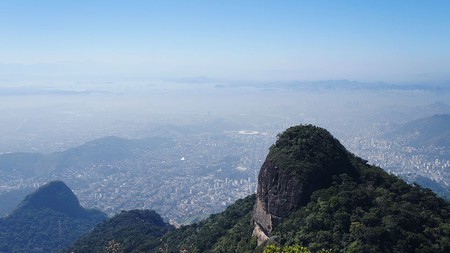 From the top of Pico da Tijuca | © Edson S. Moreira/WikiCommons

This hike is in Niteroi which is the neighboring city to Rio and just a short boat trip across the bay away. It’s also accessible by bus via bridge, yet traffic can be heavy. The hike starts to the left of the Itacoatiara beach and is relatively easy, taking about 30 minutes to climb to the top. The view is over the beaches in Niteroi and also up towards the north coast of Rio de Janeiro which offers an idea as to have big the Rio state coastline actually is.

This trek is over a course of three days between nearby towns Petropolis and Terespolis. It’s approximately 30 kilometres and deep within the mountain range Parque Nacional da Serra dos Órgãos. It’s one of the most beautiful treks with breathtaking scenery and stunning views. While it might be a challenging trek, the efforts are definitely worth it. Along the way, there are two camping spots where tents can be rented as well as showers. It’s recommended to camp there and not outside the designated places.

Pedra do Elefante (Rock of the Elephant)

This is the highest point in Niteroi and offers spectacular views all up the coastline and over Niteroi. The hike is moderate with a part where climbing is required, but it’s easy and doesn’t require ropes. The whole trek to the top and back down takes about two hours.