The Most Impressive Buildings in La Paz, Bolivia 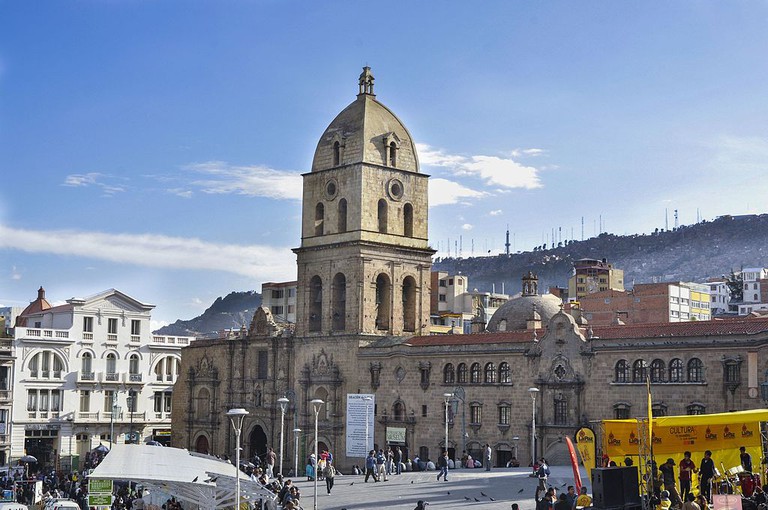 San Francisco Church | © EEJCC/Wikimedia Commons
Right in the heart of La Paz is the mammoth San Francisco Basílica, a landmark church that serves as one of the most significant houses of worship in the city. The church was built in the 18th century over a period of 10 years by Aymara workers whose influence led to the inclusion of indigenous symbols such as snakes, birds and dragons that paid homage to the Tiwinaku and Inca empires. The exterior was constructed in a baroque mestizo style, while the interior is more neo-classical and contains a mix of both indigenous and Catholic artwork. Entry to the church is free, although those wishing to enter the monastery, bell tower and catacombs must pay BOB35 (US$5) which includes a guided tour in either English or Spanish.
Open In Google Maps
173 Sagarnaga, Macrodistrito Centro La Paz, Departamento de La Paz, Bolivia
+59169863749
Give us feedback 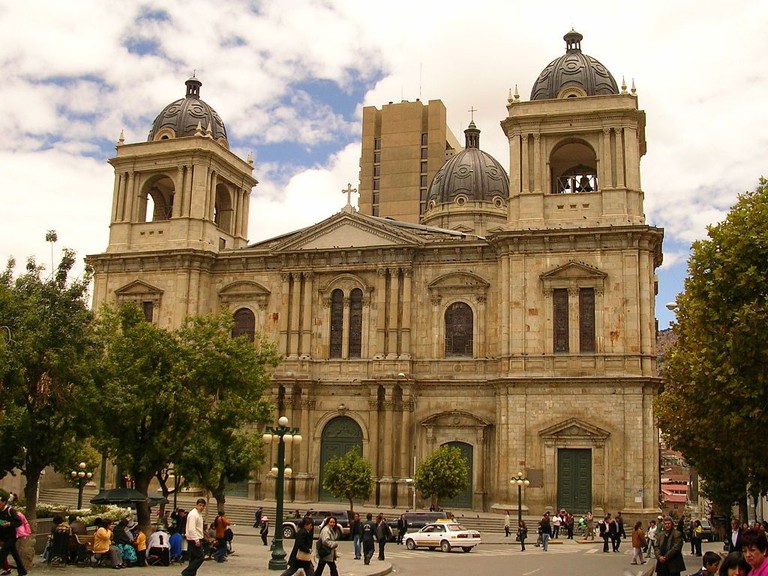 La Paz Cathedral | © Elemaki/Wikimedia Commons
The city’s other great church can be found on the corner of Plaza Murillo, La Paz’ official central plaza. Construction began in the 1620s and took over 70 years, although it was not to last. Due to poor construction methods and materials, dangerous cracks started to appear so the decision was made to knock it down and start again from scratch in 1831. The new church officially reopened in 1925 to mark the centenary of independence, although work was far from finished. It wasn’t until 1989 that the building was finally completed, more than 150 years after construction began. The end result is rather magnificent, though, featuring high domed ceilings and sturdy pillars built in a neoclassical style. One of the more remarkable features is an intricate stained glass window that depicts Bolivian politicians receiving divine intervention from God – rather poignant considering the country’s turbulent past. The church is open to the public every day, but photos are not permitted.
Open In Google Maps
Junin, Macrodistrito Centro La Paz, Departamento de La Paz, Bolivia
Give us feedback 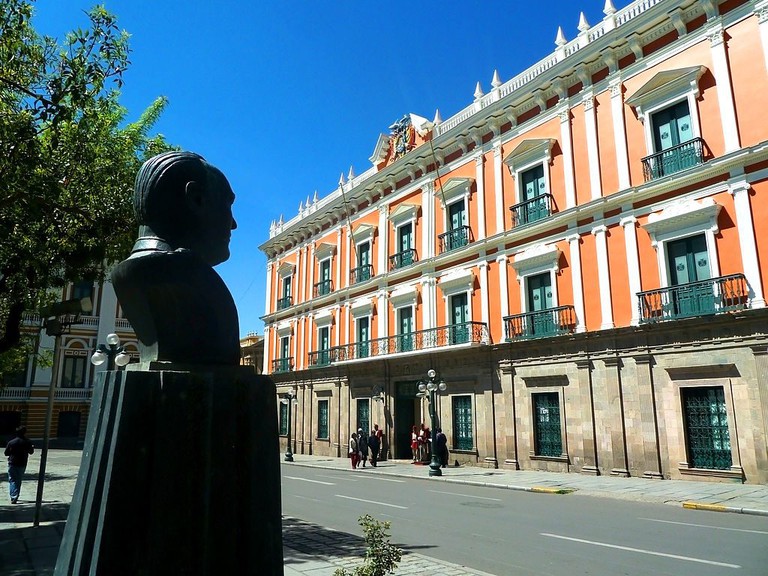 Palacio Quemado and a bust commemorating Gualberto Villarroel | © Miguel Soliz/Wikimedia Commons
Right next door to the cathedral is Bolivia’s Government Palace, affectionately known as El Palacio Quemado (The Burned Palace) because it was almost burnt to the ground during a violent revolution in 1875. As the official residence of the president, the building has seen a lot of history since its construction in 1825. A number of serving presidents have died here by way of suicide, assassination or death by lynch mob, the most famous of which was Gualberto Villarroel who was dragged into Plaza Murillo by an angry mob and hung from a lamppost. Despite its sordid history, the neoclassical structure is pleasing to the eye, featuring bright pink colored walls that contrast with the white pillars and awnings. The interior features all the grandeur you would expect from a presidential palace, although it is inaccessible to the public for obvious reasons.
Open In Google Maps
Calle2, Macrodistrito Centro La Paz, Departamento de La Paz, Bolivia
+59169442858
Give us feedback 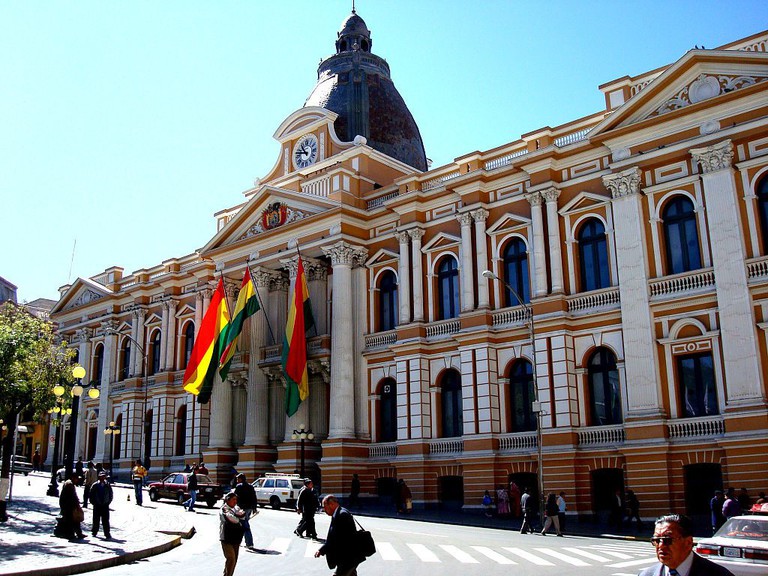 Palacio del Congreso | © Busto de Gualberto Villarroel/Wikimedia Commons
The current Plurinational Legislative Assembly on Plaza Murillo was originally intended to be Bolivia’s Central Bank, but was later remodeled into a convent and then a university. These days it serves as the house of congress, where representatives from the upper and lower house make important decisions about the country’s future. It houses the congressional library and archive, although its most notable feature is an analogue clock on the exterior that runs backwards. This rather unusual modification was implemented in 2014 as a way to “recover Bolivian identity… and break away from the hegemony of the north.”
Open In Google Maps
542 C. Bolivar, Macrodistrito Centro La Paz, Departamento de La Paz, Bolivia
Give us feedback

Not really interesting for the architecture itself, Wiphala is a standard block-shaped apartment complex situated in the depressingly poor outskirts of El Alto. What makes the complex so special are the massive murals adorning each side that were commissioned by the famous Aymara artist Mamani Mamani with funding from the federal government. With vibrant, happy colors depicting mystical indigenous symbolism, it really is a sight to behold in this otherwise sparse, depressing region. 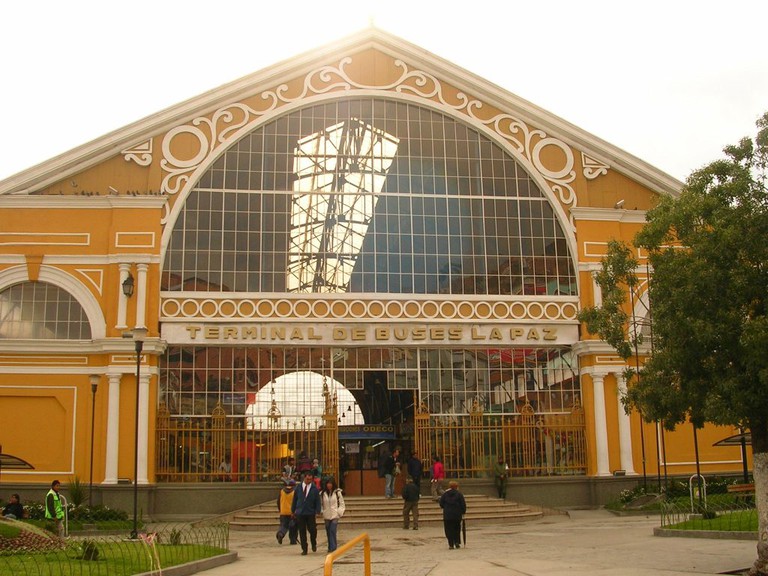 La Paz bus station | © Elemaki/Wikimedia Commons
Almost all visitors to La Paz will pass through this huge domed building and probably won’t think anything of it. What most won’t realize is that this large, airy construction was originally designed as a train station by Gustave Eiffel (of Eiffel Tower fame). Eiffel designed a number of buildings throughout South America, including La Paz’ Museum of Contemporary Art.
Open In Google Maps
Av.Peru, La Paz, Departamento de La Paz, Bolivia
Give us feedback
Give us feedback