The 10 Most Beautiful Towns In Bolivia

La Paz | © Matthew Straubmuller/Flickr
Land-locked Bolivia remains one of the lesser-explored countries of South America, leaving it to feel otherworldly and far-removed from anywhere you’ve visited before. Venture over its borders and the reward will be a compelling insight into a country full of contrasts, where the dizzying heights of the Altiplano contend with pristine Amazon rainforest, and where the lore of age-old indigenous traditions remains embedded in the cultural fabric. Scattered amid startling landscape, you’ll find Bolivia’s towns each boast a unique allure — from elegant colonial settlements to jungle-fringed locales. Here are The Culture Trip’s top ten favorites.
Bolivia © vincentraal/Flickr

Nestled between two hills on the southern shores of the sparkling cobalt-blue Lake Titicaca, the attractive town of Copacabana is the main jumping-off point for travelers visiting Isla del Sol or traveling overland to Peru. Apart from its proximity to the lake, the town is famed for its dazzling white Moorish-style basilica decorated in colorful azulejos (ceramic tiles) and domes, which tower over the central square. Built on the site of an ancient temple, the basilica is a reminder of Copacabana’s sacred status that existed well before the Spanish conquest. 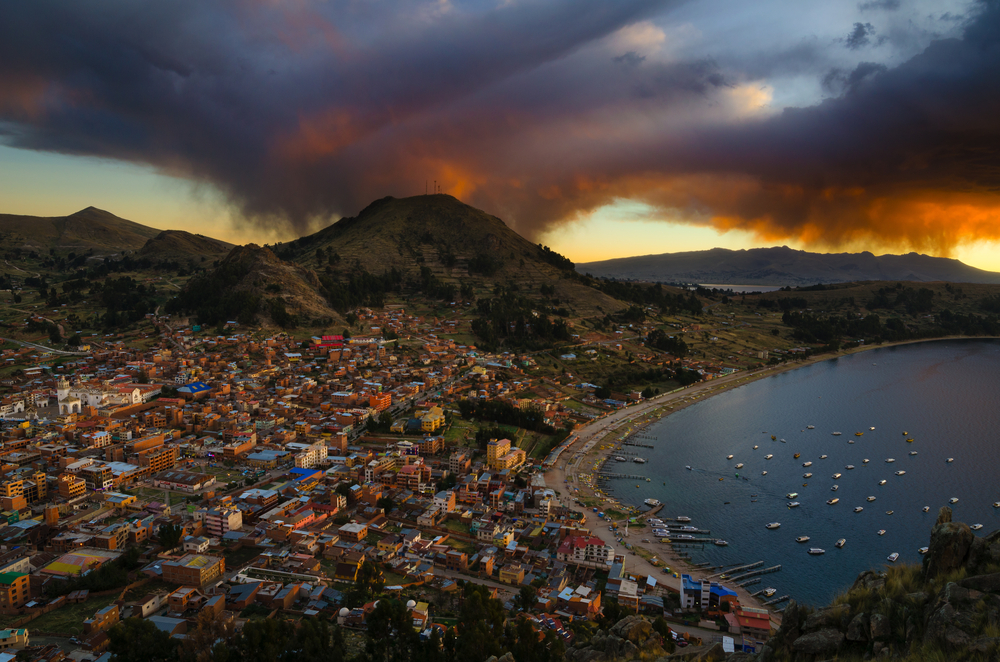 Set on an arid plateau, the UNESCO-protected city of Potosí is suspended almost 4,100 meters above sea level, earning it the title of the highest city in the world. Towering over the city is the Cerro Rico (Rich Mountain) — once the world’s richest source of silver and the reason behind Potosí’s inception as a booming mining hub during the Spanish empire. Today, visitors will be struck by the city’s trove of colonial art and architecture — including more than 2,000 restored colonial buildings as well as many elaborate churches — and there is a chance to learn more on the haunting history of the local miners by visiting the mines in person.

Set amid lush semi-tropical rainforest just a couple of hours from La Paz is the Northern Yungas town Coroico — where precipitous views and a laid-back way of life make it a welcoming respite from the frenetic big city. Plenty of walking routes surround the town, where a myriad of tropical birds and exotic fauna make exploring by foot a delight, while more adventurous travelers can dare a spine-chilling bike ride down the notorious Death Road. 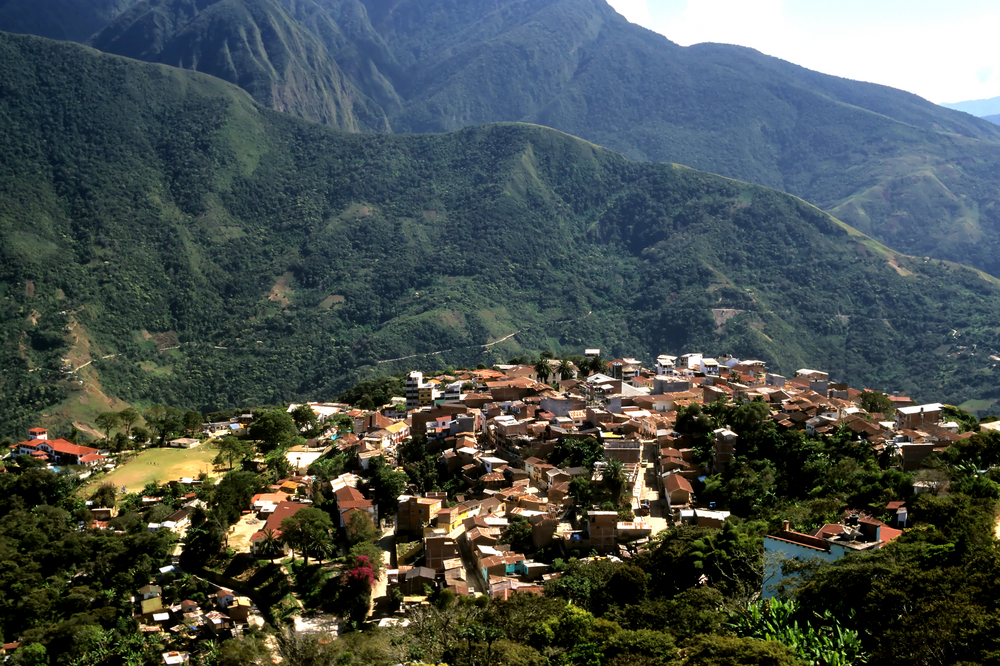 Set at a heart-fluttering altitude of 3,300 meters and with a population of 835,000, Bolivia’s de facto capital is a frenetic medley of fascinating Andean culture, bizarre food stalls, quirky markets, interesting museums and haphazard architecture that overwhelms the senses at any time of the day or night. The best view of the sprawling cityscape is from its six-mile-long cable car that connects the city center to the sky-high settlement of El Alto, from where you can see the city sprawl huddled across a valley and surrounded by the jagged range of snow-capped peaks of the Cordillera Real. 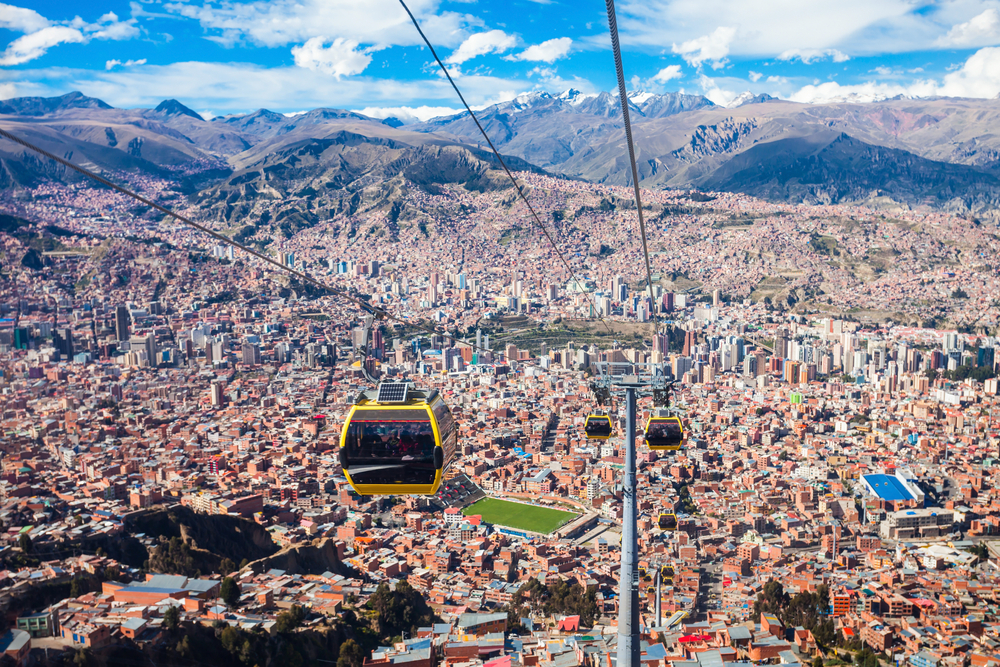 Bolivia’s official capital and all-round urban showpiece is Sucre, known for its temperate climate and refined colonial architecture remaining from when the Spanish founded the city in the 1500s. Here travelers enjoy a spring-like climate and a UNESCO-protected historic center splashed with well-preserved mansions, monasteries and churches that are characteristically quaint with unformed white-washed walls. The city is also home to Bolivia’s National Library and La Casa de la Libertad where Simon Bolivar wrote the Bolivian constitution. 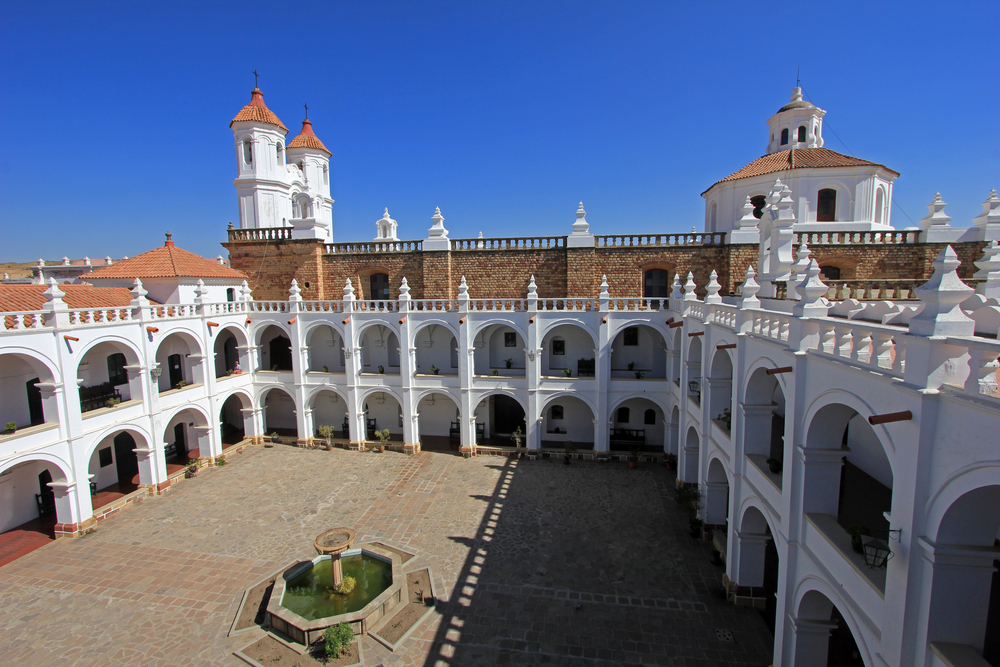 The main draw of the largely industrial mining city of Oruro happens on the ten days around Ash Wednesday, when the city explodes into a riot of colorful festivities for its annual religious carnival that has been happening for around 200 years. Listed as a UNESCO masterpiece of oral heritage, the festival brings local folklore and culture to life with around 28,000 dancers and 10,000 musicians in vibrant costumes performing their traditional dance, which always begins with the ‘diablada’ or devil dance.

This picturesque colonial village nestled on a hillside amid lush valleys and lofty snow-capped mountains is undeniably beguiling to anyone who visits. Enjoying a semi-tropical climate, the village centers around a verdant square scattered with palm trees and edged by cafés and restaurants. Explore the little streets and you’ll find street vendors proffering all sorts of tropical fruit and vegetables as well as other local eats. Its rural setting means visitors have access to many of Bolivia’s best treks that take in gurgling rivers and the eerie bat-filled caves of San Pedro. 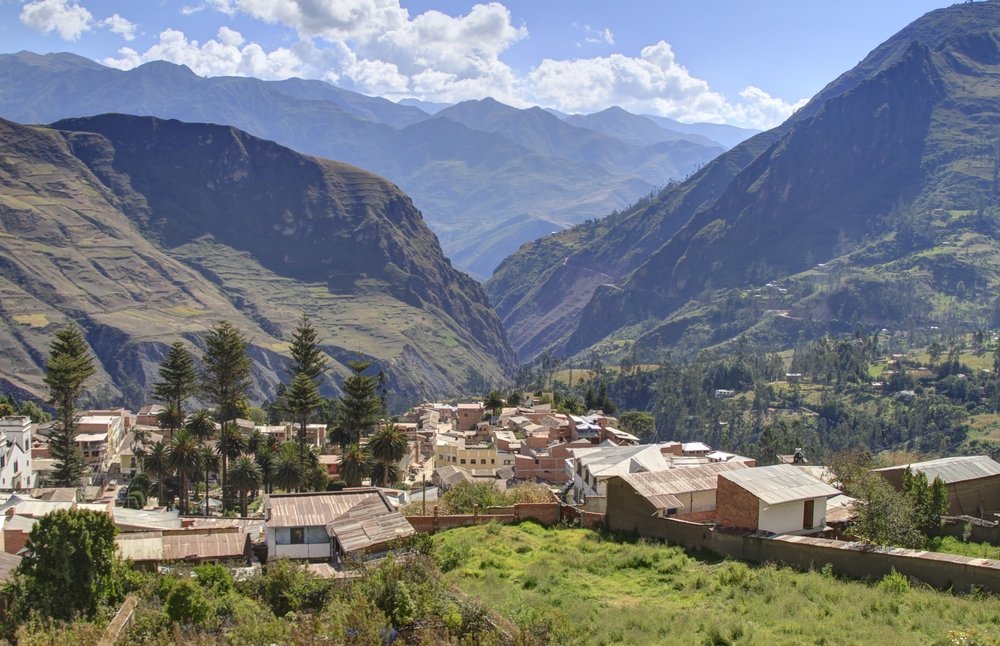 On the edge of the Pirai River to the east of the country lies Santa Cruz, a city that remains for the most part off the tourist radar. As Bolivia’s most populous city, the city still manages to retain a small-town feel thanks to its limited high-rise buildings and a relaxed, tropical atmosphere. The narrow streets of its vibrant center offer an insight into local life — packed with street stalls selling chicha (fermented corn drink), taxis and horse and carts along with an assortment of local shops selling all sorts of local products.

The isolated southern city of Tarijia feels a world away from the rest of Bolivia but draws attention for being a stone’s throw from undulating vineyards, making it a great base to explore the wineries of El Valley de la Concepción, which produces the highest-altitude wines in the world. The town itself has a inviting atmosphere, sprinkled with palm-fringed squares and café and bar terraces that make the most of its balmy sun-filled climate — surely a relief to those coming from either the humidity of the Amazon basin or the cold Altiplano. 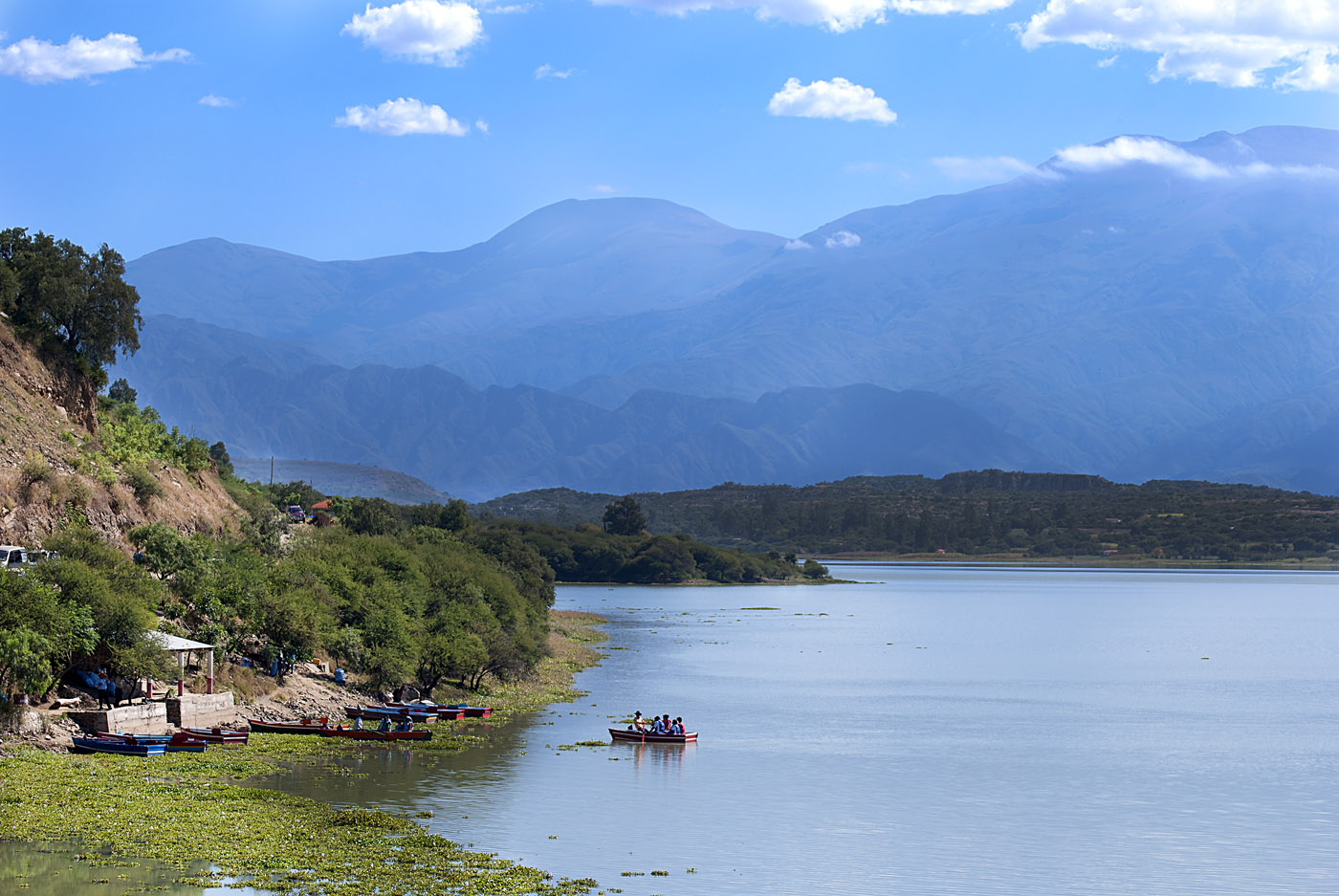 The remote jungle town of Rurrenabaque is Bolivia’s main jump-off point to exploring the Bolivian Amazon that takes the form of intrepid jungle treks into the pristine rainforest of the Madidi National Park and wildlife-spotting boat rides in the Pampas. Stretching along the bank of the Beni River, the dusty roads and scrappy stilted houses of the town have an undeniable tropical charm about them, and many travelers stop here to enjoy good food, local camaraderie and bustling nightlife before venturing into the jungle wilds. 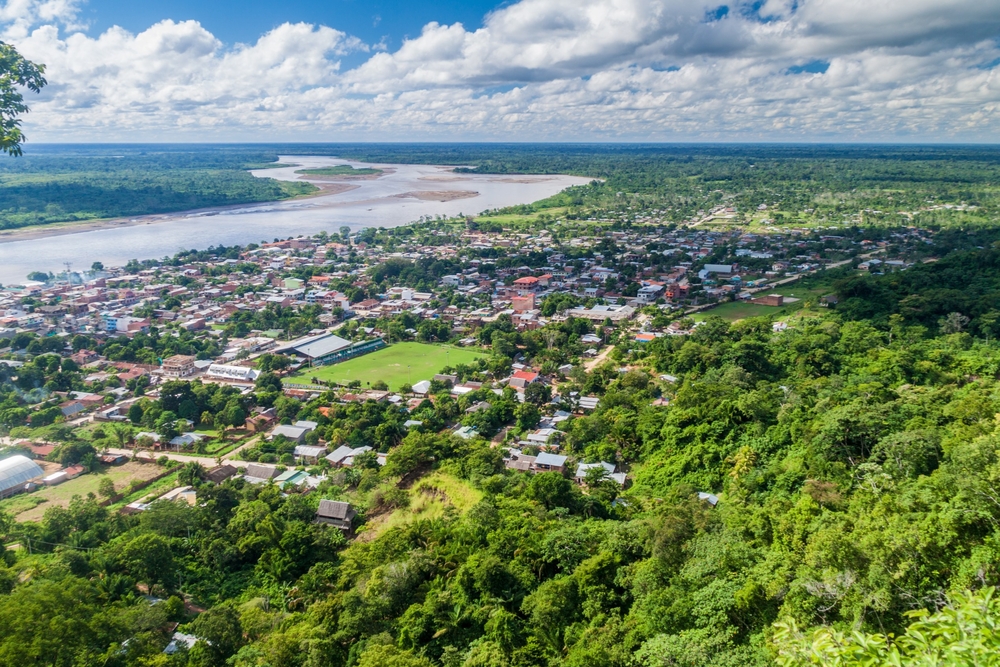