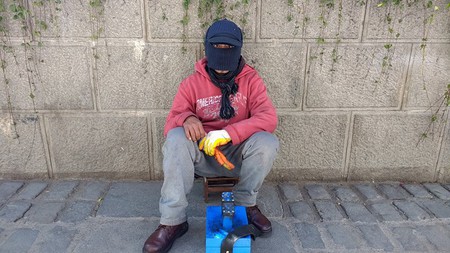 Every day, thousands of young males swarm downtown La Paz wearing tattered hooded jumpers and balaclavas. Yet despite their intimidating apparel, these are not criminal gangs looking to cause havoc on the streets. Instead, they come to work one of Bolivia’s most undesirable professions – the lustrabotas.

Shoe shiners first appeared in La Paz in the 1980s when Bolivia was suffering through a period of profound economic hardship. During this time, scores of indigenous Aymara and Quechua migrated to the neighboring city of El Alto to escape the extreme poverty of the countryside. With very few marketable skills to rely on, many began shining the shoes of La Paz’ financial elite to make enough money to survive. 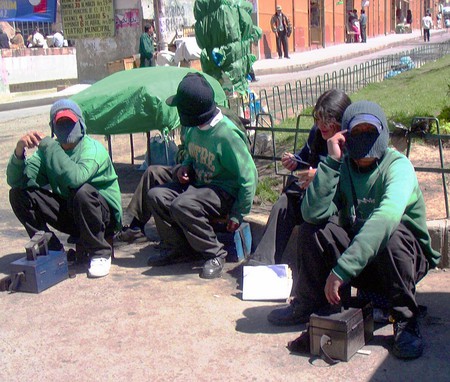 Remarkably, this huge unregulated workforce decided to unionize back in the ’90s. The very first shoe shine syndicate formed in 1997, while the much larger Shoe Shiner’s Federation of La Paz was founded 10 years later and still functions today. These days, shoe shine syndicates play a vital role in supporting vulnerable workers and reducing the stigma associated with the job.

There is no doubt the lustrabotas have an undesirable reputation in La Paz. Widely considered to be alcoholics, drug addicts and thieves, many face daily discrimination and have become ostracized from mainstream society. As a consequence, they choose to cover their faces, opting for anonymity in a profession that is universally shunned. 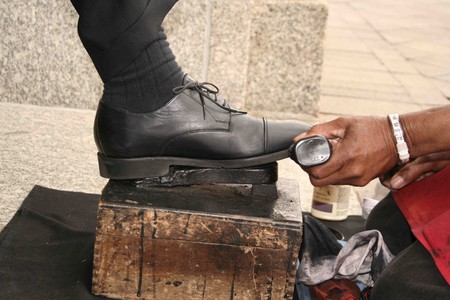 Sadly, substance abuse is undeniably rampant in the lustrabota community. Most of the young workers are orphans or have escaped from abusive homes. They turn to an industrial strength glue known as clefa to help them cope with the grim reality of life on the streets. Others spend the few coins they can muster each day on bottles of pure alcohol, slowly but surely drinking themselves to death.

An initiative by the Bolivian Arts and Culture Foundation is working to break these tendencies. Founded in 2005, the Hormigo Armado (reinforced concrete) newspaper is entirely run by the lustrabotas themselves. They write, edit, design and distribute the bimonthly paper which provides a harrowing insight into the lives of Bolivia’s destitute.

Some 4,000 copies are printed each run and given to lustrabotas to sell around the city for 4 BOB (US$0.60) each. They are allowed to keep 3 BOB (US$0.45) from each sale provided they commit to attending weekly workshops at the foundation. Covering themes such as literacy, education, human rights and self respect, the classes are designed to provide basic life skills and a sense of worth to these under educated and downtrodden youth. The foundation also provides subsidized food with the help of government funding, ensuring the lustrabotas don’t have to go hungry despite their modest average income of just 30 BOB ($US4.20) per day.

Culture Trip spoke to a lustrabota, pictured above, on Plaza Murillo in La Paz. At 28 years of age, Rubin has been shining shoes on the streets for the last seven years.

He describes himself as an ambulante, a kind of traveling freelance shoe shiner. “I work everywhere” he says. “Here, down below, around the Prado too. Wherever it seems like there are a lot of people that day.”

Although he acknowledges syndicates can be useful, he chooses not to join for financial reasons. “They have to pay. They get nice chairs, official shirts and the best spots. But with that comes with a monthly fee”, he adds. “There is also a foundation. We eat there because it’s really cheap. The government pays some so it’s not too expensive”.

As for his anonymity, Rubin is reluctant to talk about discrimination and comes up with a creative excuse instead. “The cleaning chemicals smell” he says, “They’re really strong. But with this mask, I can avoid the smell all day.”