A growing economy and a renewed sense of indigenous pride has led to the rise of a new style of architecture that has put some color into the otherwise drab city of El Alto. Extravagant and colorful Nuevo Andino (New Andean)-style buildings are popping up everywhere in this largely indigenous Aymara city that sprawls across the highland plains above its more famous neighbor, La Paz. Spearheaded by Freddy Mamani, a creative Aymara architect and local legend, his Nuevo Andino masterpieces are ushering in a new chapter of indigenous cultural identity.

El Alto has seen a continuous population boom over the last 20 years, as impoverished farmers migrate in droves from the country to find a better life in the city. This cold, unattractive and haphazard city is struggling to keep up with demand, neglecting aesthetics in favor of accommodating an urban sprawl of half finished apartments with bare, unpainted brick walls. But things are slowly starting to change thanks to a growing economy and the creativity of Mamani who, like Gaudí and other famous architects before him, has the opportunity to redefine the style of an entire city. 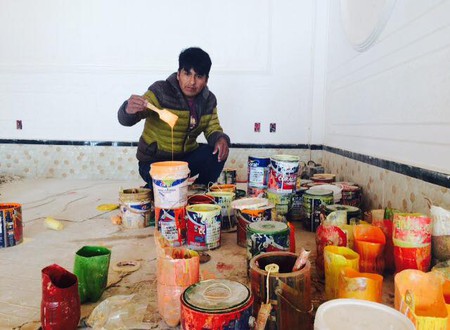 Mamani first learned to build from his bricklayer father, and was inspired by his mother and other Aymara weavers whose traditional geometric patterns and colorful animal forms are reflected in his work. After moving to El Alto as a young man, he studied engineering at La Paz’ biggest university with limited success. His teachers were not fond of his extravagant, colorful designs, urging him to conform to more rigid European techniques instead. But, with encouragement from others in his community, he saw there was a market for his vision and focused on perfecting his art. 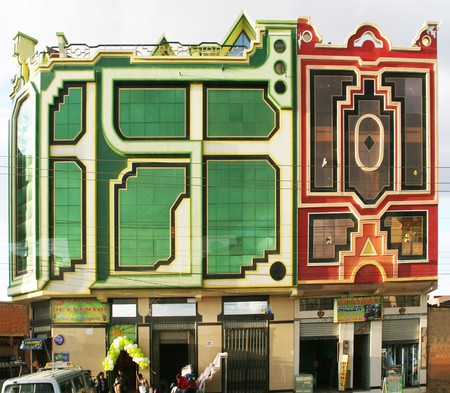 Mamani’s buildings are known as “cholets,” a playful mixture between chalet and Cholo (persons indigenous to Latin America). Through them, he has single-handedly pioneered the New Andean style which has become increasingly popular in recent years. Much of his inspiration has been drawn from the old Andean style, which refers to buildings constructed by the Incas and other ancient indigenous civilizations. However, his new style is decidedly more colorful, celebratory and modern. Detractors label it tacky or kitsch, but there is still plenty of demand from wealthy Aymara who adore his designs. Indeed, for the affluent residents of El Alto, owning a Mamani building is the ultimate status symbol. Most of his clients are successful elites who have made a fortune in recent years through the large-scale importation of everyday goods. 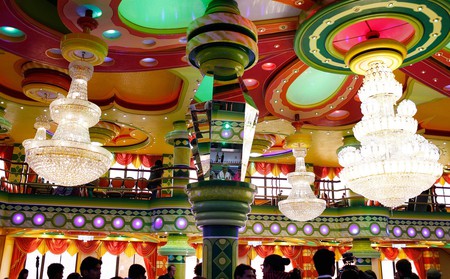 All of his designs are drawn up by hand with little reliance on computer aided design techniques, perhaps indicative of the poor education standards in this impoverished country. His buildings are large and imposing – at least by local standards – usually comprised of five or six storys. The bottom floors are dedicated to street-level commerce so that shops and restaurants can garner income from passersby. The second floor is normally an event hall, complete with extravagantly carved animal sculptures, brightly colored walls and over-the-top chandeliers. The next few floors are independent apartments, to either provide another income stream or housing for the owner’s family. Finally, on the top floor is the penthouse suite, where the wealthy proprietor lives in luxury with sweeping views over Illimani and the city below. A medium sized cholet goes for US$500,000 while the grandest in the city cost over a million dollars – a huge sum of money for a city with so little. 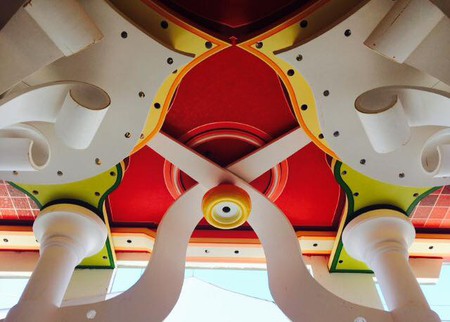 Around a dozen cholets are in construction at any one time, with around 200 workers carrying out Mamani’s vision. Half of these are designated to work on basic construction, while the other half focus on the finer details, delicately perfecting the interiors with plaster molds and oil based paints. He has completed over 60 cholets so far, and at just 42 years of age, Mamani is likely to complete many more, changing the face of El Alto forever.