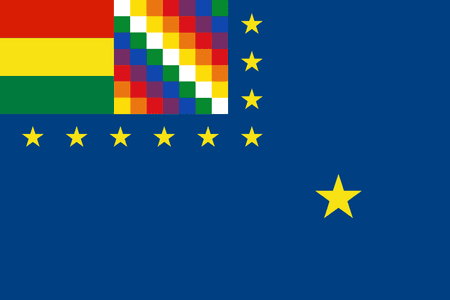 Bolivia unfurled a somewhat unusual tactic last Saturday in their ongoing battle to reclaim their access to the sea: a tremendous maritime flag of world record-breaking length. Described by President Evo Morales as a “flag of maritime vindication,” the enormous ensign required tens of thousands of people to sew together and hold in place between the cities of El Alto and Oruro.

The land dispute goes back to the late 19th century, when Bolivia lost the War of the Pacific to Chile. As part of a peace treaty negotiated between the two presidents of the time, Bolivia became landlocked by conceding its 250 miles (400 kilometers) of coastline in a widely criticized deal that many still resent today.

As Bolivia then became the only country in South America without access to the sea (Paraguay can reach the Atlantic via the Parana River), the economic consequences of having restricted world-market access are undoubtedly severe. To make matters worse, Bolivia relies heavily on natural gas and mineral exports, all of which must be sent through neighboring countries at considerable additional expense. 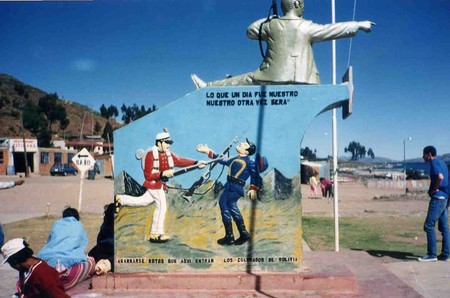 What was once ours will be ours once again | © Dentren / WikiCommons

It’s not just the economic impact that inspires Bolivia’s battle to reclaim the sea, though, as the movement has been firmly embedded into the national psyche over the years. Schools teach children from a young age that the sea is rightfully theirs, while politicians have long garnered local support by drumming up nationalistic sentiment. Indeed, Bolivians from all walks of life will proclaim with conviction that they were wronged and that the subsequent 100 years of resentment have been entirely justified.

All of this collective nationalism culminates on March 23 each year, a date officially observed throughout the country as el Dia del Mar (“the day of the sea”). In a bizarre public display, Bolivians take to the streets en masse to parade around in cutout ships, with their sizable Navy proudly taking center stage.

The unfurling of the flag this year was timed to coincide with a legal proceeding that has just begun in The Hague, Holland. As far back as 2013, Morales officially requested the dispute be heard at the International Court of Justice. Now that the proceeding is finally underway, Bolivians are watching intently to see what happens over the next few weeks.

Chile has previously stated that there is “nothing to negotiate and its sovereign borders are fixed through a treaty after the war.” Morales and the rest of Bolivia, however, beg to differ. Regardless of the outcome, most observers agree on one thing: it is unlikely Chile will return any land to Bolivia.