Here's Where You Can Dive Off Skyscrapers in a Superhero Costume 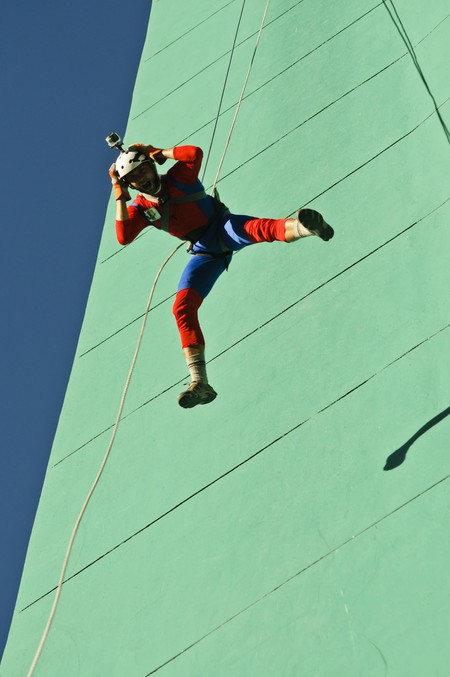 Ever dreamed of acting out those childhood superhero fantasies in the real world? Well, in Bolivia you can do just that. An established adventure outfit, known as Urban Rush, offers brave adventurers the opportunity to fearlessly scale down and leap from a skyrise building while donning a funky spandex suit, in honor of their favorite Marvel or Capcom icon.

Situated in the heart of downtown La Paz opposite the city’s most populated plaza, this death-defying abseiling experience brings extreme sports into the urban realm. After an in-depth training session with a team of professional guides, travelers slip into a heroic onesie before embarking on an adrenaline pumping vertical descent. 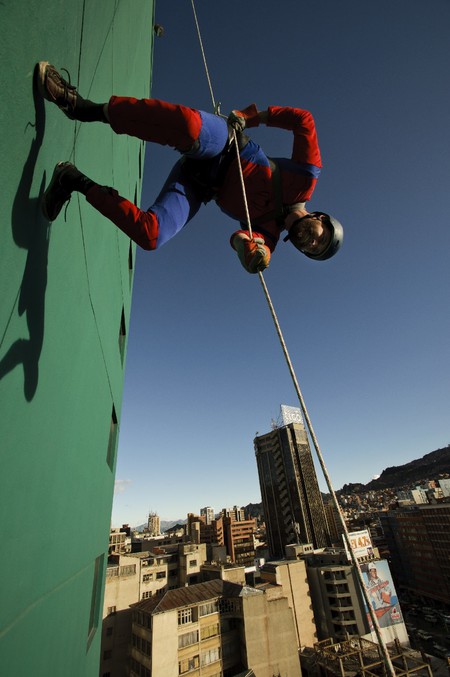 Abseiling down | Courtesy of UrbanRush.com

Of course, pretending to be a superhero is an integral part of the experience. Among the numerous outfits on offer are Batman, Wonder Woman, Captain America, Catwoman, and—of course—Spider-Man.

At just over 50 meters (164 feet) above the busy street, the throngs of minibuses and pedestrians below seem like little more than a colony of tiny ants, as they go about their daily lives. 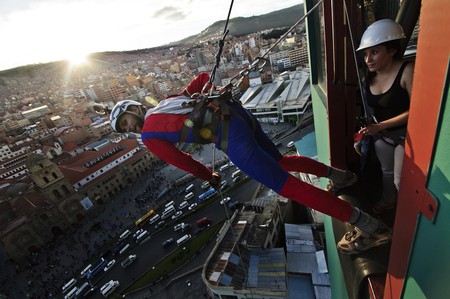 At the top | Courtesy of UrbanRush.com

Most travelers opt for the traditional abseiling or rappeling method in which they face upwards during the descent. The gutsier among us, however, might prefer rap jumping: a vertigo-inducing face down venture that was first invented by the Australian Special Forces—certainly not recommended for those with a fear of heights.

If that doesn’t sound exciting (or terrifying) enough, the real fun starts when travelers reach the sixth floor. Here, participants leap away from the wall and plummet into a petrifying free fall before being brought to a sudden halt by the guides, as they arrive at the landing platform below.

We know what you’re thinking: an adventure sport of such extremity must entail significant risk. Not so, actually, as this agency (operated by U.S and New Zealand organizers) exceeds all international safety standards and is purport to be 100% safe.

The company only uses top-of-the-line gear imported from the United States and France, which is swapped out every three months to remove any risk from wear and tear. On-site, a team of knowledgeable and enthusiastic English speaking guides give guests a thorough safety briefing, including unlimited time on a 2-meter practice wall to help them feel at ease.

While on the wall, travelers are able to set a speed they are comfortable with by using their own brakes. Meanwhile, trained guides on the top and bottom oversee the entire activity with emergency brakes of their own. Twin ropes are used at all times to safeguard against the unlikely event that a line could fray.

Blood-curdling screams are commonplace, yet the company has never had an accident since operations began back in 2012. Even if an adventurer were to panic and freeze, the well-trained guides would be able to gently lower them to safety at any time.

Now that you’re feeling a little more confident about the company’s credentials, all that’s left to do is make your way to Hotel Presidente, suit up in your favorite superhero outfit, and leap off the Penthouse Suite window on the 17th floor.