Climbing Around La Paz, Bolivia: the Best Mountains To Summit 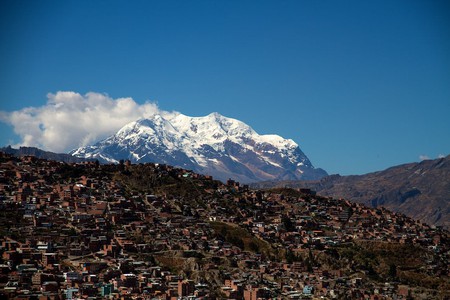 La Paz has plenty to offer the outdoor adventurer, particularly those who want to discover the best mountains to summit. To the north of the city lies the majestic Cordillera Real, a breathtaking mountain range boasting some of the best Andean climbs. From beginner-friendly options to expert-only ascents, these are the best hills to conquer around La Paz.

Choosing a climbing guide or agency

Unless you’re an elite mountaineer with dozens of dizzyingly high peaks under your belt, you’re going to need the help of a local guide. In Bolivia, some unscrupulous operators cut corners on safety to offer a more competitive rate, so be wary of deals which seem too good to be true and insist on climbing with no more than two tourists per guide. Climbing Bolivia, Climbing South America, and Andean Ascents all have solid reputations. Check the Asociación de Guías de Montaña (Mountain Guide’s Association) registry to confirm your guide has the proper credentials.

Regardless of the ascent, climbers must have at least basic physical fitness and be free from any respiratory or heart conditions. Furthermore, proper acclimatization is essential. Spend at least a week in La Paz and embark on a few warm-up hikes, such as Pico Austria or Laguna Arkhata, beforehand. Climbing season runs from May to September. Although it is possible to climb outside this period, inclement weather can cause last-minute cancelations and serious safety issues.

Coca leaves provide notable relief from altitude sickness – either chewed raw, drank as a tea or infused in candy. Nevertheless, you should head back downhill immediately if you start feeling nauseous or dizzy. Solo climbers can contact Socorro Andino Boliviano for help in an emergency. 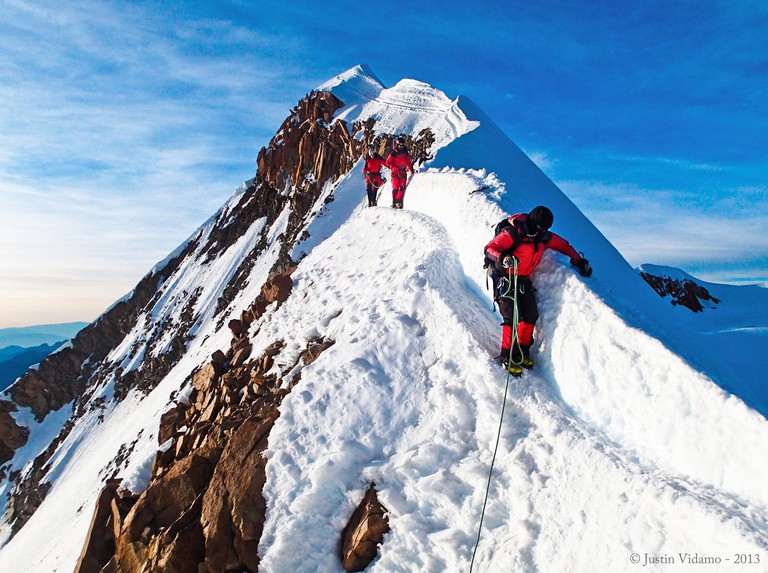 Heading back from the summit of Huayna Potosi | © Justin Vidamo / Flickr

As one of the easiest 6,000-meter mountains in the world, the beginner-friendly Huayna Potosi is Bolivia’s most frequently climbed peak. Don’t underestimate the difficulty though – you still need a decent level of fitness and a hell of a lot of willpower to reach the top. Tours last for either two or three days, with the latter option more suited to those who require extra time at altitude. Experts use Huayna as an acclimatization summit, often preferring to scale a more technically challenging passage on the mountain than the normal route. 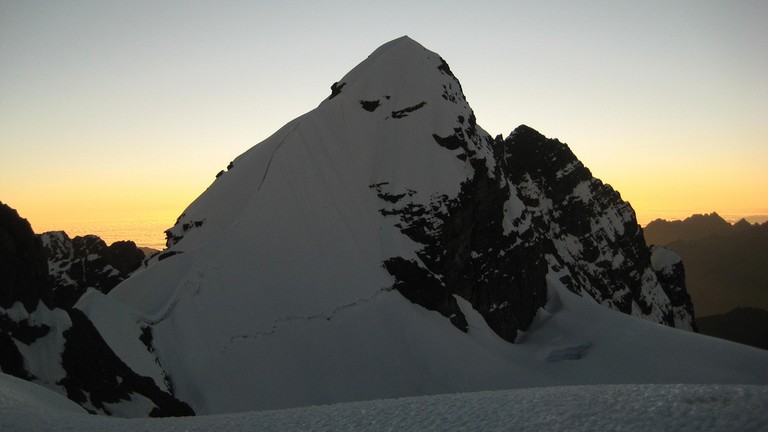 Although it may rest almost 2,300 feet (700 meters) lower than Huayna Potosi, the summit of Pequeño Alpamayo is not easy to reach. Climbers must navigate a series of undulating crests in icy conditions before they can even start the ascent to the summit. Nevertheless, it is one of the easier climbs in the area and an ideal option for beginners. Again, serious mountaineers often treat it as a warm-up for bigger challenges. 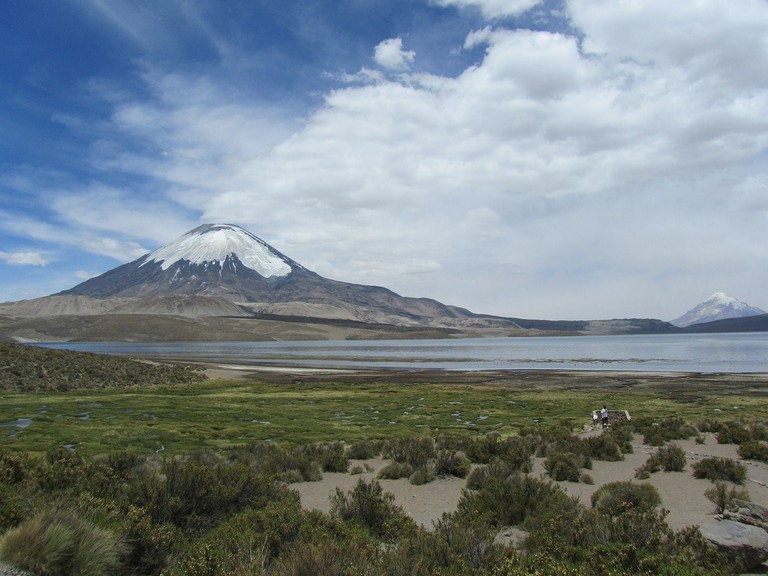 Parinacota Volcano | | © Backpackerin / Pixabay
Stretching over the Chilean and Bolivian border within the remote Sajama National Park, the dormant stratovolcano Parinacota is another exceptional option for the budding mountaineer. The standard route sees climbers slogging their way uphill along scree until they put on their crampons to tackle the icy upper section. Gradients rarely exceed more than 40 degrees, which means Parinacota can be taken on by beginner climbers in good physical health. At the summit, adventurers can gaze down its gaping crater, complete with molten lava on the western edge. 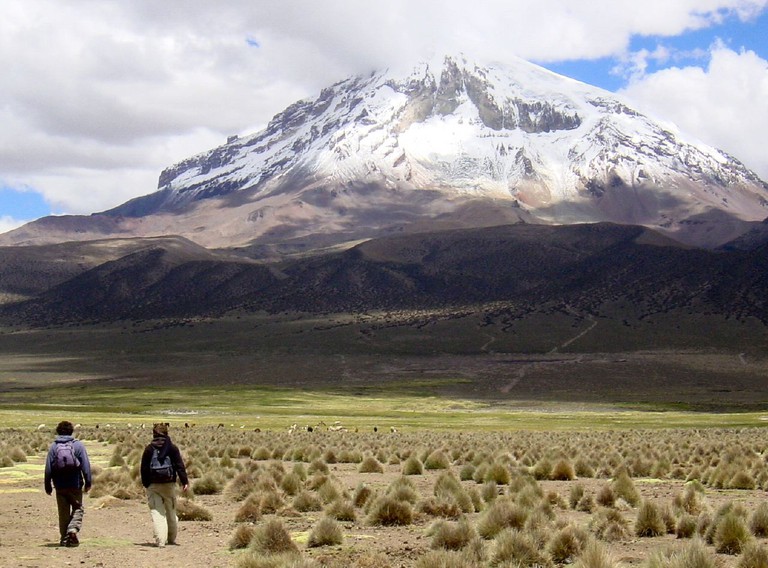 Two hikers with Sajama in the background | © ch images / Flickr

Just 12 miles (20 kilometers) away in the middle of the park lies Sajama, a colossal dormant volcano which boasts Bolivia’s highest peak. But that’s not to say it’s an experts-only affair; Sajama isn’t particularly technical. A bit of mountaineering experience, a good level of fitness and an aptitude for altitude are all it takes to summit this beast. 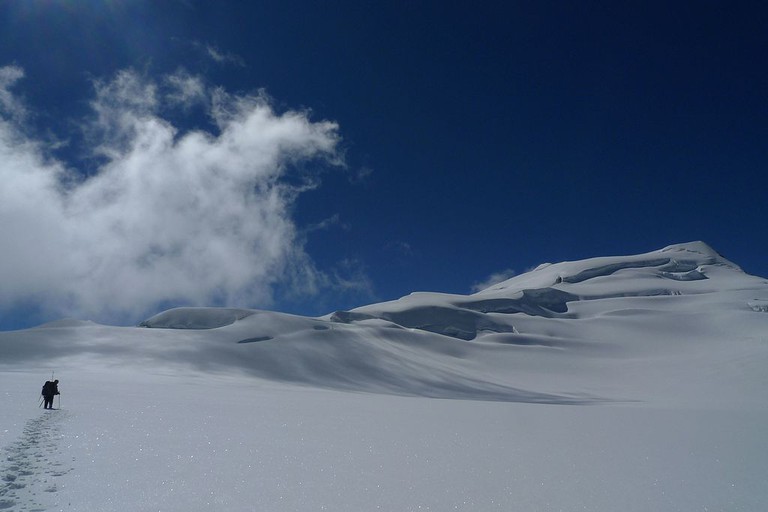 Mountaineers looking to get off the well-trodden climbing circuit could try Chachacomani, a moderately challenging 6,000-meter peak which has only recently begun receiving tourists. Given its modest technical difficulty and proximity to La Paz, the mountain is bound to become a hit sometime soon. So get there quick, and you’ll be the only climber in sight. 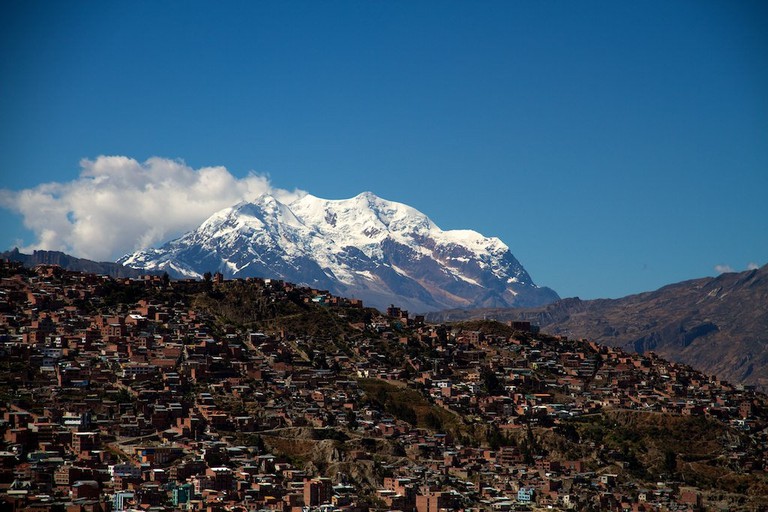 Towering over La Paz, the multipronged Mount Illimani is the city’s guardian angel and, according to folklore, the mother of the Cordillera Real. And as the tallest peak in the entire mountain range, she’s one formidable mother indeed! You’ll need an intermediate level of mountaineering experience and peak physical fitness to complete this challenging climb. 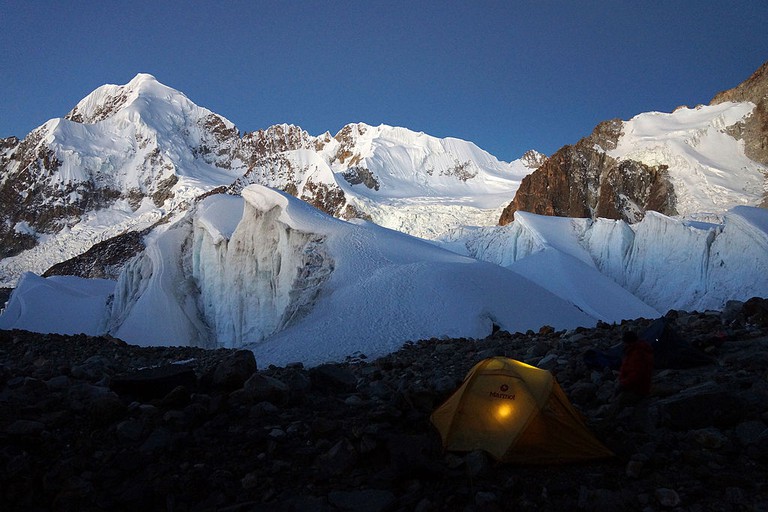 Best only tackle this one if you’re an expert, for Illampu is widely regarded as Bolivia’s toughest climb. Not only is it technically demanding, but the steep and snowy ascent requires true physical effort to overcome. Those who do make it to the top will be rewarded with sweeping views of the surrounding Andes, as well as Lake Titicaca and the seemingly endless Amazon rainforest below.

Regardless of which mountains you decide to summit, Bolivia offers some of the world’s most breathtaking high altitude expeditions at an incredibly affordable rate.