Blessing Automobiles with Beer and Other Strange Customs in Copacabana, Bolivia 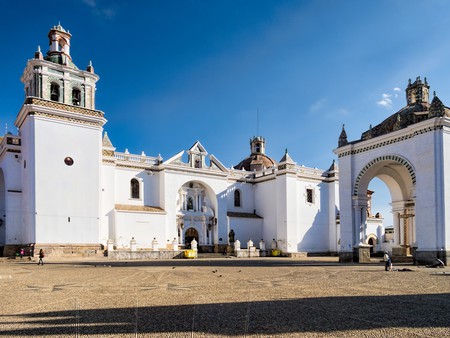 Basilica of Our Lady of Copacabana | © Dan Lundberg / Flickr

At first glance, you could be forgiven for dismissing Bolivia’s Copacabana as an uninspiring tourist trap—the town’s endless array of tacky restaurants and generic concrete hotels amid rubbish-strewn plazas and windswept streets give the impression of being anything but sacred. However, those who dig a little deeper will uncover tantalizing tales of ancient miracles, religious relics, and an unusual blessing that involves an abundance of beer.

Copacabana has been the focal point of the modern-day Bolivian pilgrimage since cars became relatively affordable sometime during the 1950s. During that time, a sacred ceremony known as the Bendición de Movilidades (Blessing of the Automobiles) was born, causing hordes of Bolivians and Peruvians to flock to the city to bless their cars in both Catholic and indigenous rituals, faithfully presuming to receive safe passage in return. 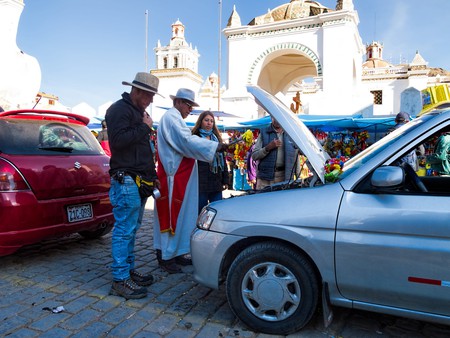 Blessing of the cars | © Dan Lundberg/Flickr

Although such blessings can be administered any day of the week, weekends are when things reach fever pitch as cars queue bumper to bumper for blocks on end. After patiently awaiting their turn, the devout finally arrive at the postcard-perfect Iglesia de la Virgen de Copacabana where, for a modest sum of around 200 BOB ($29 USD), their automobiles can receive a blessing from both a Catholic priest and an Aymara yatiri (witch doctor).

Both holy practitioners administer their blessings simultaneously in an open display of religious syncretism unlike any other in the world. The Catholics prefer to dispense holy water from a bucket onto the open engines of awaiting automobiles. Yatiris, on the other hand, use incense, the coca leaf, and prayer to invoke absolution from Pachamama (mother nature) herself. 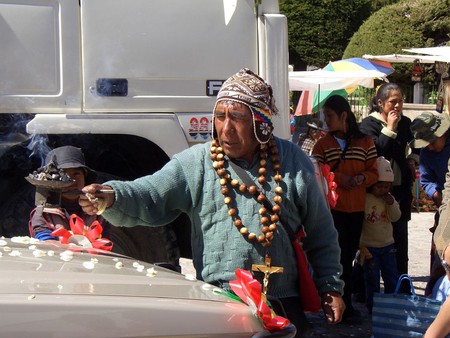 Once blessings have been received from both sects, car owners ceremoniously splash a few pints of beer on their vehicle. This unusual practice is largely done for celebration, although some believe it helps quench the thirst of Pachamama as well.

It’s customary for celebrants to finish off a case of beer prior to the event, ideally staying overnight in a local hotel to sleep it off rather than attempt to drive all the way home.

There’s no doubt that religion has always been at the forefront in this strange Bolivian town. Nestled on the shores of Lake Titicaca, Copacabana is just a short boat ride away from the Isla del Sol, a sacred island which the Inca believed to be the birthplace of the sun.

Historians at first thought the town was named after ‘kota kahuana’, an Aymara phrase for ‘view of the lake’. Sometime later, a Spanish scholar found out that Kotakawana was the Andean god of fertility, with the latter discovery of phallic nearby shrines giving credence to his salacious claim.

Basilica of Our Lady of Copacabana | © Dan Lundberg / Flickr

With the arrival of the Spanish conquistadors in the 1500s, Copacabana became sacred once again.

An Inca Catholic convert by the name of Francisco Tito Yupanqui was living in Copacabana when he decided to craft a statue of a virgin to honor his quaint lakeside town. After embarking on an epic journey to learn the art of sculpture from a master craftsman in Potosí, Yupanqui eventually made his way back home with the newly crafted ‘Virgin of Copacabana’ in hand.

Before long, the statue was credited with numerous miracles throughout the lands: those who dared to disbelieve in her power saw their crops wilt and die, while faithful worshippers received a bountiful harvest year after year. In the 1600s, a Catholic priest documented 132 supposed miracles attributed to this one statue alone.

Her most famous marvel, however, pertains to a group of Brazillian fishermen who were caught in a terrible storm. Just minutes from death, they were suddenly saved by an apparition of the Virgin of Copacabana. The story held such reverence throughout the continent that Rio de Janeiro’s most famous beach was eventually given the statue’s name.