6 Musicians You Need to Know From Bolivia 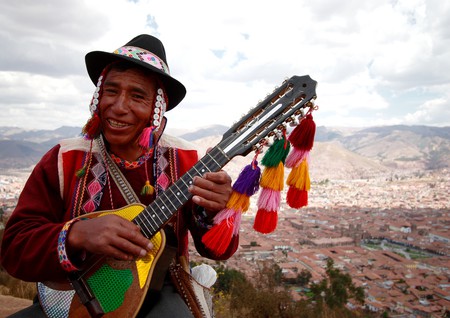 With precolonial indigenous traditions thriving alongside modern western influences, Bolivia has a rich musical history that encompasses a wide range of styles. The most well-known national artists play folklorica, although genres such as rock and even electro have made inroads in recent decades. Read on to discover the most important musicians, both young and old, this diverse Andean nation has to offer.

Bolivia’s most legendary band and a household name throughout the country, Los Kjarkas have been turning out classic folk albums since 1976. This six man ensamble has seen several changes throughout the years, including the addition of a Japanese national who loved one of their live performances so much he successfully auditioned for a spot. Sporting traditional ponchos onstage and playing time-old instruments such as the zampona (Andean flute) and charango (banjo), Los Kjarkas are a national treasure and a source of pride among many indigenous Bolivians. The group has recorded over 350 songs, founded numerous local music academies and toured the world including Europe, the Americas, Asia and Australia.

Bolivia’s premier rock/reggae band, Atajo formed in 1996 when a group of like-minded musicians got together and started playing clubs around their home city of La Paz. From the get-go, this self-described collective initiative has striven to reflect the reality of Bolivian society, in all its faults and all its beauty. Many of their songs convey strong political and social messages, often critical of the governments of both Bolivia and the United States. After gaining a strong local following, Atajo left Bolivia to go on tour, playing at various bars, festivals and events in Germany and later throughout the rest of Europe. As of April 2016 the band is taking a break, though it’s almost certain this six-piece will be back to play their blues-, ska- and folklorica-inspired hits sooner rather than later.

Fronted by legendary Bolivian singer César Junaro, Savia Nueva are another timeless Bolivian folklorica group that has played an important role in the nation’s musical history. Originally formed back in the 1970s, the group has a more classic approach to folklorica with lyrics that are largely poetic and romantic, yet sometimes tackle more serious themes such as poverty and revolution. They have released just four records over the decades, all of which have become universally revered throughout the country, capturing the hearts of the population and earning a place in the national psyche.

Hailing from La Paz, this famous foklorica band started out in the mid 1980s as a kind of experiment in indigenous Andean music, although they quickly developed their own unique style. Through the blending of traditional instruments with new electronic sounds like the synthesizer, the group has been able to resonate with their campesino (country folk) fan base while simultaneously attracting new listeners in other continents around the world, ultimately becoming one of the most internationally recognized Bolivian bands of all time. Their music remains particularly popular with the youth of today, enjoying plenty of airplay at festivals and concerts throughout the country.

Bolivia’s most famous female classical folk singer, Zulma Yugar has received international recognition for her strong vocal range that swings between impossibly high and low notes, almost reminiscent of European opera. Born in Oruro in the 1950s, her songs mostly deal with love and broken relationships. She later went on to become Bolivia’s Minister of Culture and lobbied for UNESCO to recognize Oruro’s carnival as international cultural heritage.

The other great Bolivian rock band, Octavia’s unique sound is a haphazard mix of catchy pop choruses, traditional Andean instruments, electro synths, heavy riffs and funky bass lines. Starting out in 1988, they found international success in 1995 when they were picked up by Sony Records and began touring the United States and Latin America. These days, Octavia can still be found rocking out to an enthusiastic crowd in the clubs of their hometown La Paz and elsewhere in Bolivia.