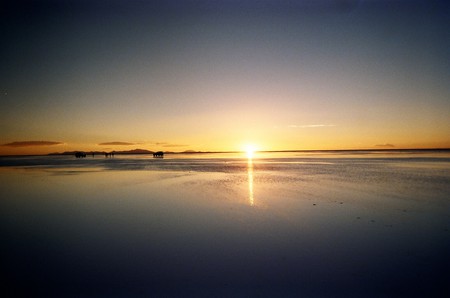 Due to its incredible natural scenery and turbulent political history, Bolivia has set the stage for a number of foreign feature films. From western classics to Hollywood blockbusters and political documentaries, here are our picks of the top 10.

Butch Cassidy and the Sundance Kid (1969)

A classic for the ages, Butch Cassidy and the Sundance Kid is one of the most widely regarded American westerns ever made. An Academy Award winner for best screenplay in 1969, it was also chosen by the Library of Congress to be held in the United States Film Registry for its cultural, historial and aesthetic significance. This famous outlaw story ends in Bolivia where the gung-ho duo finally meet their maker.

Blackthorn provides an interesting alternative ending to the Butch Cassidy story. In this version, Cassidy survives the final shoot out and goes on to live in Bolivia for another 20 years as an outlaw on the run. Feeling a little homesick, he embarks on an epic adventure to return to his homeland with plenty of shootouts against bandits and lawmen along the way. Although not as famous as the 1969 classic, it has been praised for its awesome cinematography which masterfully captures Bolivia’s diverse topography.

A Spanish drama, Even the Rain tells the story of two low budget film directors who travel to Bolivia to research making a historical film about the arrival of Christopher Colombus. Bolivian is chosen as the ideal location because low crew costs would allow the pair to complete the film under budget. However, the duo soon find themselves caught up in the 2001 Cochabamba Water Wars and things don’t quite go to plan. Somewhat ironically, there has been some speculation as to whether the real production paid their staff a fair salary.

In what is admittedly a rather ridiculous plot line, Salt and Fire is about a scientific team who come to Bolivia to investigate the environmental crimes of a large corporation. The gang somehow find themselves in the middle of the Salar de Uyuni with two blind kids when a nearby volcano erupts and all hell breaks loose. Although blockbuster director Werner Herzog has certainly done better, it does have some impressive shots of Bolivia’s most famous tourist attraction.

Our Brand is Crisis is an insightful documentary that examines the questionable practice of U.S. Government interference in Latin American elections. In 2002, a sleek U.S. funded political marketing campaign headed by legendary image consultant James Carville sees unpopular Bolivian candidate Gonzalo Sánchez de Lozada, A.K.A. Gringo Goni, get elected ahead of the firebrand, anti-imperialist Evo Morales. The documenary is widely praised for providing a fascinating insight into the sleazy world of U.S political campaigning.

A dramatized Hollywood interpretation of the aforementioned documentary, this 2015 version shines for its strong performances by superstars Sandra Bullock and Tommy Lee Jones. By turns funny and thought provoking, it does an excellent job of portraying the political uncertainty and turmoil that regularly afflicts Latin American nations. Some, however, criticize it for being overly patriotic and failing to examine how U.S political intervention can negatively effect the lives of the most vulnerable.

A powerful documentary, The Devil’s Miner shows the harsh reality of two young boys who are forced to work in the terrible conditions of Potosi’s notorious Cerro Rico mine. As with other miners in the region, the youngsters worship the devil – known locally as El Tio – in the hopes of receiving protection from the dangers of his underground domain. A particularly worthwhile film for those planning on visiting Potosi.

Even James Bond has been to Bolivia. In Quantum of Solace, the quintessentially smooth British spy finds himself in Bolivia to confront his arch-nemesis-of-the-time who plans to take control of the country’s water supply. These days, the storyline is rather ironic considering Bolivia is only just starting to recover from a record breaking drought. Fun fact: the filmmakers decided to film in Chile which stirred up controversy because the locals didn’t like being portrayed as Bolivians.

An intriguing documentary that follows a trio of young Norwegian women who are convicted of drug smuggling and wind up in jail in Cochabamba. The film skillfully documents the sensational fiasco which includes a Hollywood-style escape, a pregnancy behind bars and some blatantly racist media coverage. By the end of a case full of disgracefully discriminatory journalism, director Violeta Ayala ends up asking the question, “Perhaps it is the media that needs to be put on trial?”

Bet you didn’t expect to see this on the list. The eighth installment of the epic Star Wars saga was partially filmed in the surreal alienesque landscape of Bolivia’s Salar de Uyuni. While the part the salar plays in the upcoming blockbuster is a closely guarded secret, the latest trailer provides a glimpse of a bombastic battle scene complete with lasers and low flying spacecraft. Bolivian Star Wars fans are collectively squealing in excitement.