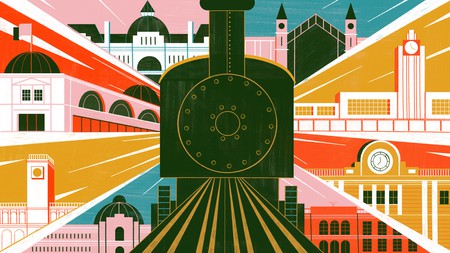 The Industrial Revolution brought trains that globalized Latin America and inspired elaborate, architectural gems in the form of train stations. Grandiose and celebrated, these terminals define a moment of history that transformed an entire continent.

Trains were pivotal in transforming South America. They moved products and supplies quickly, leading to increased international trade. The resulting economic success during the late 1800s and early 1900s inspired a wave of students to travel across the Atlantic to study in Europe and solidify a global presence. Upon their return to Latin America, no longer students, the architects of this period created beautiful buildings guided by their education in Classical European design principles.

Decorated, grandiose or stately, we found the top 12 train stations that particularly embody not only the economic success of the Steam Age but also signify the strength and power of the independent Latin American nations. They remain a treasured snapshot of time. 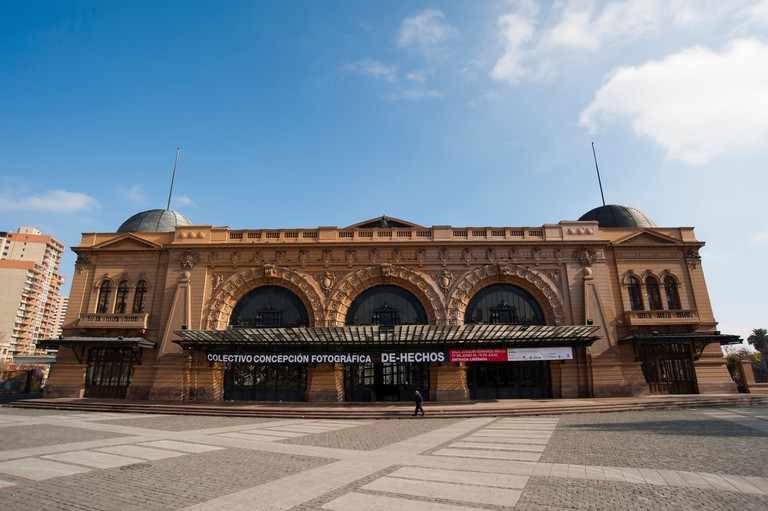 Estación Mapocho is situated near the Mapocho River. The name originates from the Chilean indigenous tribe, the Mapuche, who called the river Mapu Chuco, meaning ‘water that penetrates the land’. The station was officially commissioned along with the park of Santa Lucía Hill (named after the Chilean High Court of Justice), and the Chilean National Museum of Fine Arts to celebrate the first centenary of Chilean independence in 1910. Chilean architect Emilio Jéquier led the project. The grandiose monument included a steel vault originally covered in glass (now copper) that was constructed by the Belgian Haine Saint Pierre construction company. The station has been completely restored and refurbished. In 1994, it reopened as the Centro Cultural Estación Mapocho. Now it is a dedicated cultural center that showcases Chilean art and hosts conventions, concerts and more.

Open In Google Maps
Región Metropolitana, Chile
Give us feedback 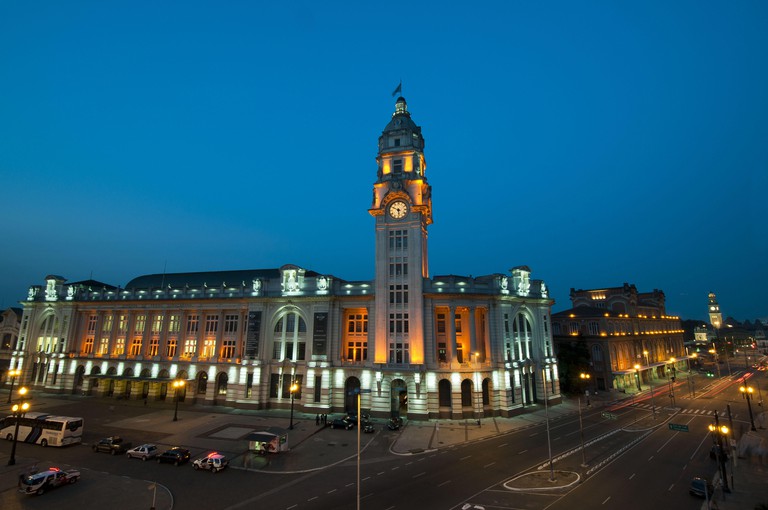 After the coffee boom and into the Great Depression, the impressive Júlio Prestes Station struggled into existence between 1925-1938. Taking 12 years to complete, the 25,000 square meter (269,100 square foot) beaux-arts building in the heart of São Paulo finally found its glory. In one section of the platform, visitors will find the repurposed body of a German Zeppelin that once flew above the city. Now, the station is famous for a 1,000 square meter (10,764 square foot) concert hall within the building, Sala São Paulo, where the orchestra often performs. The European concert hall has a one-of-a-kind moveable ceiling for optimizing the acoustics.

Treasured Bolivian architect Julio Mariaca Pando designed the elegant planes, symmetrical corners and soaring arches of Estación Central de Ferrocarriles de La Paz. Completed in 1930, its legacy continues as it has recently been reborn as a station for the Mi Teleférico aerial cable cars gliding through the skies of La Paz. The transport system was developed as a solution to connect two of the most populous cities in Bolivia: El Alto, and, of course, La Paz. Their proximity has always been challenged by an elevation of 1,300ft (400m), limiting travel to small and winding roads. Now connected by this impressive, modern system, the train station remains an important stop for the red and orange lines. The building also serves as a cultural center. Locals might refer to it by its Aymara name Taypi Uta, which means ‘Central House’.

The colonial city of Goiânia was modeled after the gardener theory of Ebenezer Howard. The city plan, striving for grandeur, composed its first streets and green spaces in concentric circles. These geometric elements paired well with the elements of Art Deco standards. So when the train station Estação de Goiânia was constructed in 1950, the bright yellow, sleek and cubist building fit right in. It is just one of the 22 representations of the Art Deco forms in the city. The station only operated for 20 years and, after decades of neglect, the Institute of National Historical and Artistic Heritage (IPHAN) recently restored the building. Located in Worker Square, it is close to the City Hall and the Goiânia Bus Terminal. 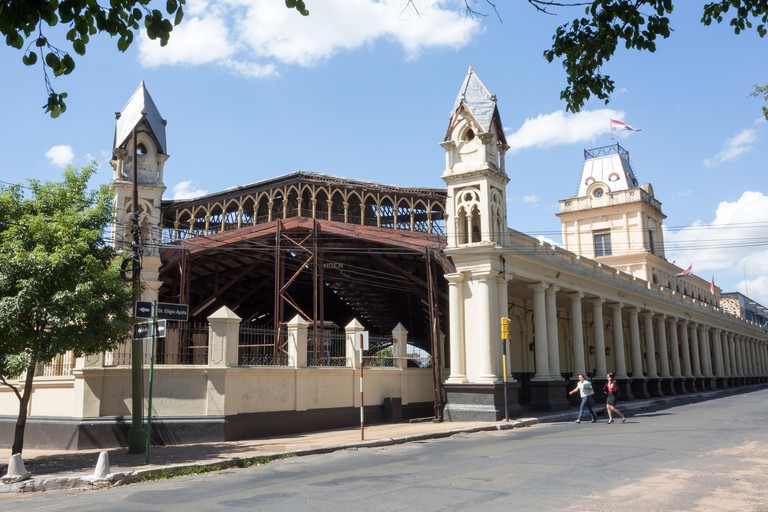 This train station ushered in the world of steam for Paraguay. It was renamed Ferrocarril Carlos Antonio López in 2000 to commemorate the President of the country between 1844 and 1861 who brought in these changes. Construction of this building began during the López Era in 1859 and was completed in 1864. Now it is a museum dedicated entirely to the railroads of Paraguay. Inside you can find an old pufferbelly steam locomotive, which you can climb aboard, and relics like station clocks, locomotive design plans, bulky books and old documentation. Located near the heart of the city, you can’t miss the mix of neo-Gothic Victorian with the Frenchified roof and the strong surrounding columns.

Open In Google Maps
Asunción, Asunción, Paraguay
Give us feedback

The ceiling of the Estación de Desamparados is a domed cacophony of colors and lights shimmering down from an Art Deco stained glass masterpiece. The symmetrical facade adheres to classical design principles, which Peruvian architect Rafael Marquina used in his 1911 design. The station is located between Plaza de Armas de Lima, the main square and the Rímac River. Facing the entrance is the stately Government Palace. Tucked inside the station building is The House of Peruvian Literature, featuring exhibits celebrating the lives and work of Peruvian writers. 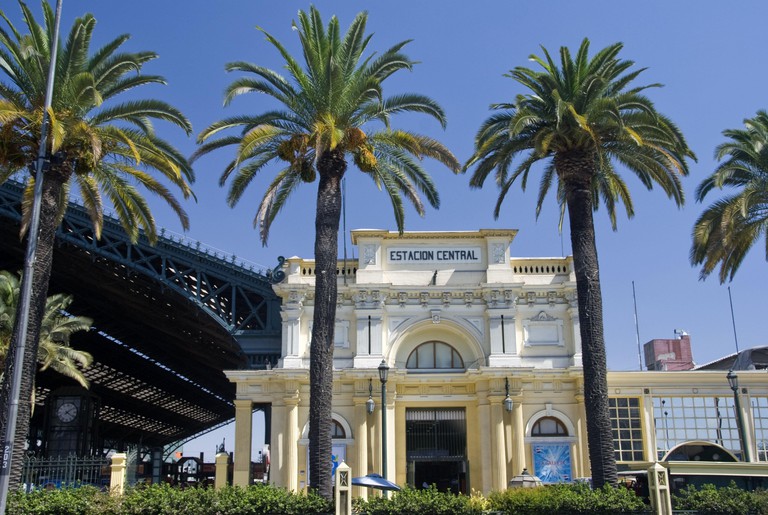 Still as stately and impressive as it looked when it was built, the white and clashing silver of Estación Central is reason enough to visit Santiago, Chile. This train station boasts names such as Gustave Eiffel and Schneider of Le Creusot as designers, French icons of construction. Along with its tenets of architectural French Classicism, this station is a doorway peering into a wildly under-celebrated and classy city. Look for opportunities to taste Chilean wine, uncover the inspiration behind Pablo Neruda’s poetry and enjoy the unbelievable backdrop of the Andes. 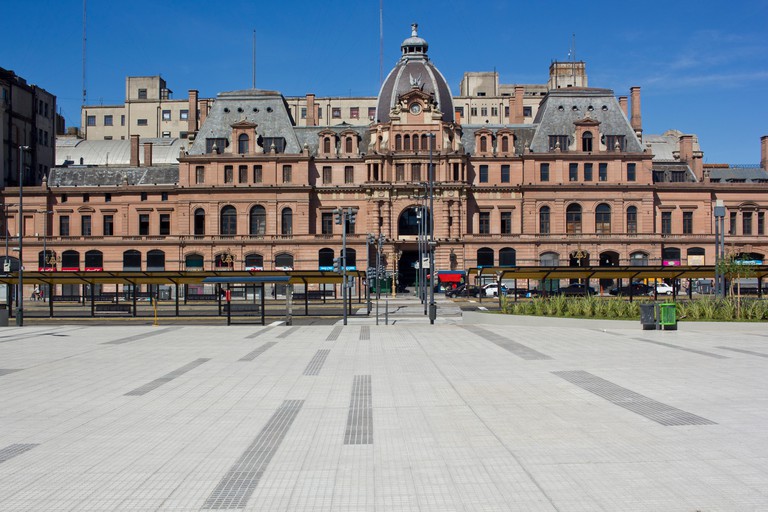 A century-and-a-half ago, Estación Constitución opened up just across Constitution Square. A buzzing, energetic station transporting half a million passengers daily, the building is located just 1.2mi (2km) south of the Obelisco landmark. Incredible homages to various periods of growth are showcased within the architecture. The French-style facade first appeared in 1883 in the exquisite baroque Maisons-Laffitte style. Later, 1923-1925 marks the most recent construction of the magnificent main hall using pieces manufactured and shipped from Liverpool. These rails deliver you within walking distance of the bumbling markets of San Telmo or Buenos Aires Museum of Modern Art.

Right at the center of Colombia, in the middle of sprawling Bogota, is the Estación de la Sabana. Built at a time of expansion and growth, this train station is a National Monument that was key to the development of the western part of the city. The interior features high ceilings and a central hall flanked by Corinthian columns that retain an undeniable elegance. Perched atop the neo-classical facade is the national symbol of Colombia, a stately sculpture of the Andean condor. The train station is not far from the Gold Museum (with over 55,000 pieces of gold to peruse) or you can explore the cobbled, bright streets of the historic La Candelaria neighborhood. Should you like to get outside the urban buzz, the tracks of Estación de la Sabana run out of the city to the delightful Colonial town of Zipaquirá, founded in the 1600s, home to an underground salt cathedral. 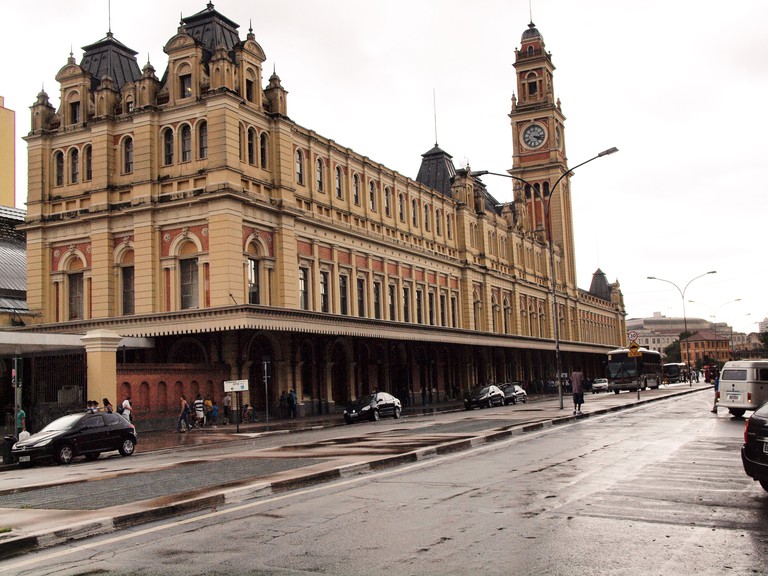 Now both a train and metro stop, the Luz Station sits at the center of São Paulo. With a neighborhood and a garden with the same name, the Luz quartier is an elegant cultural hub. Preceding the nearby Julio Prestes Station, the Luz train station was designed by British architect Henry Driver and fabricated in England. The Victorian building was completed in 1901 and became an entry port for immigrants from Japan and Europe and an exit point for Brazilian coffee. The building is now home to the Museu da Língua Portuguesa, an interactive museum that explores the languages that have influenced Brazilian Portuguese. Just across the road, you can find the iconic Pinacoteca museum, São Paulo’s first art museum. 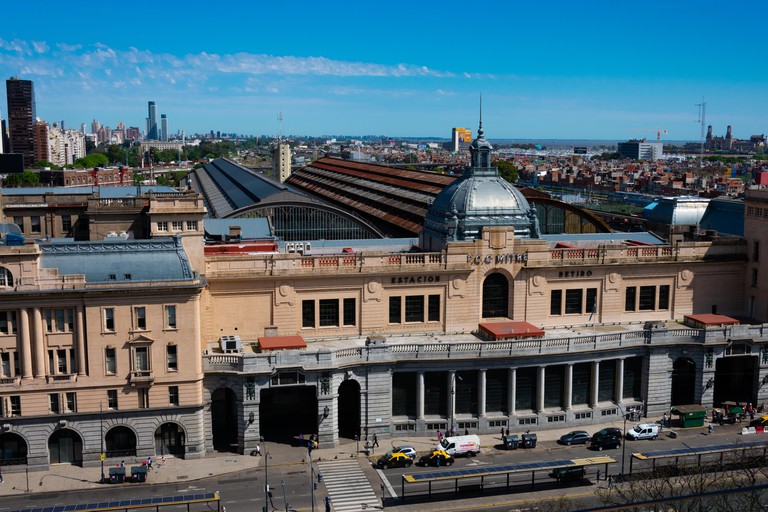 © Diego Coppola / Alamy Stock Photo
A surprising collection of European architectural influences sits right at the center of Buenos Aires, surrounding the train station. The impressive Estación Retiro illuminates classic Edwardian-Baroque elements. It has a gleaming domed ceiling in the main hall and was designed by British architects who brought materials made in Liverpool, England, all the way to this southern part of South America. To see other similar architectural influences nearby, Palacio San Martín demonstrates the classic principles of students of the École des Beaux-Arts in Paris. And just a bit further away stands the Italian style Teatro Colón, home to European materials like Italian marble, French stained glass, and Venetian mosaics.
Open In Google Maps
1430 Avenida Doctor José María Ramos Mejía, Retiro Buenos Aires, C1104, Argentina
Visit Website
Give us feedback 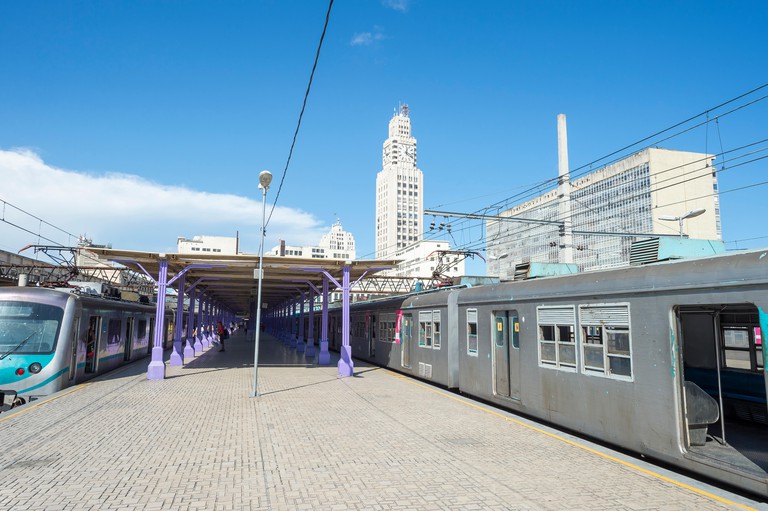 The center of Rio de Janeiro stretches out from the swarm of people moving through the Central do Brasil station. Easy to spot, the 134-meter (440-foot) tall tower has four clock faces keeping the city on time. These IBM clocks are the second biggest in the world (after those on London’s Big Ben tower). Every day, around 600,000 people flow through the station to the Centro neighborhood. Just a few steps away from here are other cultural landmarks like the Teatro Municipal (for classical music or ballet), the Museu do Amanhã (Museum of Tomorrow) and the Museu Nacional de Belas Artes (Museum of Fine Arts).