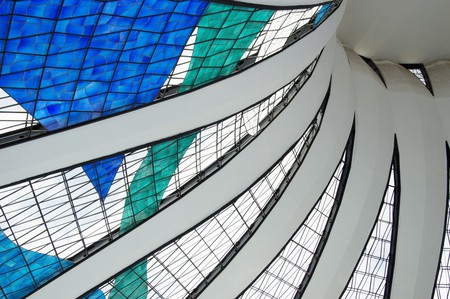 Oscar Niemeyer is one of the most famous architects of the 20th century. Responsible for not only the creation of Brazil’s capital, Brasilia, Neimeyer defined the spirit, energy and freedom of Brazil and Brazilian culture in physical form. Incredibly, he lived until he was 104, and was still designing stunning buildings up until his death in 2012. We take a look at some of the Brazilian architect’s most iconic buildings in South America.

This apartment block in downtown São Paulo is one of Brazil’s largest buildings, which is saying something considering the scale of the buildings in the dense metropolis of the city. Towering an amazing 140 meters (459 feet) over the surrounding buildings, this 38-story tower is home to 1,160 residential units. Completed in 1953, it is typical of Niemeyer’s use of biometric forms and sinuous, curvilinear geometries which defined his particular style. Edifício Copan has been an influential architectural icon, inspiring writers, poets, and photographers over the years, who consider the building a quintessential relic of a particular era of Brazilian architecture. 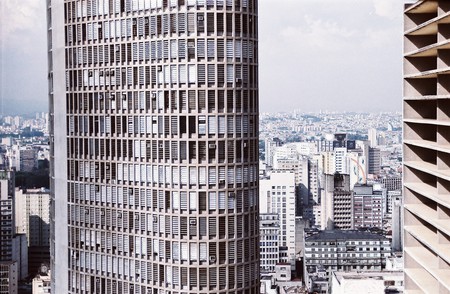 This iconic building is home to Brazil’s national congress, and typifies Niemeyer’s stylistic output which can perhaps be characterized as Brazilian modernism. The congress building is located in the Brazilian capital of Brasília, which is considered a feat of urban planning and architectural conception, as the city was built from nothing with the expressed purpose of creating an administrative capital for this huge country in 1960. The congress building represents the juncture of landscaping and architecture, where Brasilia’s ground plane, designed by landscape architect Lucio Costa, meets Neimeyer’s design, whose two slender towers and long, linear plinth are clearly inspired by Le Corbusier. But this modernist stance is given some Brazilian flair with the semi-circular bowl elements that provide an aesthetic break from the rigid vertical and horizontal geometries present in the rest of the building.

This religious structure has a unique silhouette, formed from a radial series of concrete fins that gleam white against the blue sky that can often be seen in the Brazilian capital. The building has a sculptural quality to it that does not subscribe to the traditional Roman Catholic model of a cathedral, and 16 concrete columns form a hyperboloid structure that are inlaid with delicate blue stained glass that create a bright, airy space internally that evokes an atmosphere of the divine. The external structure was conceived of to represent two hands shooting up towards heaven. 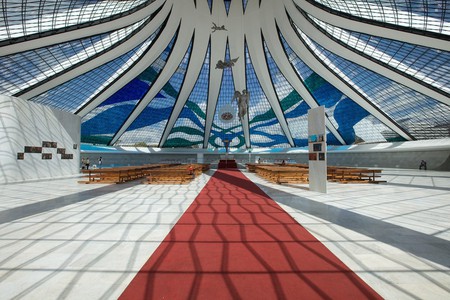 Another Corb-inspired construction, the Church of St. Francis de Assisi in Belo Horizonte uses Niemeyer’s classic organic forms, this time with undulating concrete arches, the primary parabola bisected by a planar canopy that links to a vertical element that lends the building a compositional air. The landscaping surrounding the church was designed by Roberto Burle Marx, one of Brazil’s most important landscape architects and a longtime Niemeyer collaborator. The design of the church was very controversial, with the local archbishop describing it as “the devil’s bomb shelter.”

Perhaps one of Niemeyer’s most famous buildings, this contemporary art gallery was completed in 1996, yet is still most definitely a product of Niemeyer’s unique and individual architectural style, some 40 years after he was associated with the modernist movement in South America. Perched on the edge of a rocky bluff that juts out at the end of a peninsula, the museum has a futuristic form, appearing as a spaceship that has just landed from another galaxy. The gallery’s spiral walkway was recently used as a location for an important Louis Vuitton fashion show, with the architecture forming a glamorous backdrop for both models and clothes alike. 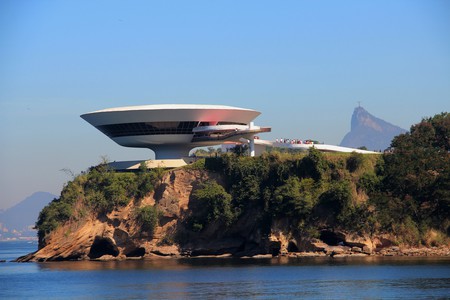 This imposing hotel on Rio de Janeiro’s beachfront lay abandoned for many years following decades of neglect, ransacking and vandalism, before it was bought by Melia Hotels and Resorts and restored to its former glory last year. Artworks by famous contemporary Brazilian artists were installed in the lobby and the landscaping, again by Burle Marx, was reinstated, and many new features such as wellness facilities, were added to the hotel. The circular tower’s guest rooms all benefit from panoramic views over the lush, green hills that are ubiquitous around Rio de Janeiro.

Officially the president’s office, the Palacio de Planalto is another building that was constructed as part of the masterplan for the new capital Brasília, and was one of the first to be inaugurated in the new city. It was a focal point of the nascent capital, and as such the architecture was intended to be representative of the spirit of Brazil at the time, evoking simplicity, modernity and class that manifested themselves in wavy lines and pure forms. The resultant building is a low-lying concrete and glass pavilion, with slender concrete horizonal elements supported by a series of minimal columns that are wide at the bottom and taper towards the top, lending the palace an air of structural finesse. 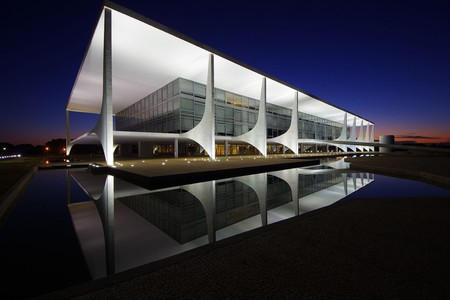