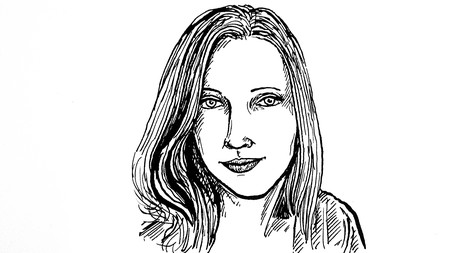 As part of our “20 Literary Translators Under 40” series, we interviewed Spanish language literary translator Heather Cleary.

Recent translations: Poems to Read on a Streetcar by Oliverio Girondo (Argentina); The Dark by Sergio Chejfec (Argentina)

Read: “Among the Dead” a short story by Cuban writer Ernesto Hernández Busto

What are you currently translating?
The book I’m working on right now is Mexican writer Martín Solares‘s Don’t Send Flowers, a politically savvy narco noir set in the fictional town of La Eternidad, against a backdrop of police corruption and cartel violence. I’ve had a great time exploring the rhythms and pivots of this kind of writing, especially because the novel breaks with the conventions of detective fiction in some interesting ways. After that, I’m on to Mexican writer Mario Bellatin‘s Mrs. Murakami’s Garden for Phoneme Media and Argentine writer Roque Larraquy’s Madrivore for Coffee House Press.

What approach or procedures do you take when translating?
It varies from book to book: sometimes I’ll read around a translation first (I’m looking forward to the Larraquy, which will give me an excuse to dig deep into the strange world of Cesare Lombroso, founder of the Italian school of positivist criminology ), other times I’ll jump right in. One thing I always do is try to figure out what sort of space the book occupies in its literary system of origin, and then recreate that as best I can through a highly unscientific process of triangulation. If it’s fiction, I look for other works the book might be in conversation with, genre conventions it either adopts or eschews; if it’s non-fiction, I try to pin down its style of argumentation, level of formality, and so on. Eventually you get something like a frame for moving the whole thing over. This process is a bit more delicate when dealing with poetry, though I don’t subscribe to the notion that poetry is radically different from prose when it comes to translation, and certainly not that it’s untranslatable. Everything is untranslatable—that’s what makes this fun.

What kinds of works or regions do you gravitate toward?
As both a reader and a translator, I love books that are knotty and dark in some way; if there’s a moment or two of dry humor in there, all the better. These, of course, are not hard and fast rules; some of my favorite translation projects have had nothing to do with this description.

Who or what are some untranslated writers or works that you would like to see in English? Why?
Norah Lange! She was known for her subtle, pointed poetry and prose, as well as for asserting herself in the traditionally male space of the avant-garde literary scene in Buenos Aires in the 1920s and 30s; she’s been overshadowed in the historical record, however, by the men in her circle (em, Borges). She was also married to Oliverio Girondo, a poet I’ve studied and translated for years, so you could say the household has become a bit of an obsession of mine.

What are some of the more interesting literary developments happening in the language or region you translate from?
The field is a bit too big and diverse to make any general pronouncements, but there have been some really interesting takes on biopolitics recently: I’m thinking of Martín Felipe Castagnet’s Bodies of Summer (tr. Frances Riddle) and Samanta Schweblin’s Fever Dream (tr. Megan McDowell), which is both impossible to classify and essential reading.

What is a recent translation challenge you faced?
Trying to make crazy gangster monikers sound menacing in English.