12 Underrated Cities in South America You Should Visit

Caño Cristales, Colombia | © Mario Carvajal / Wikimedia Commons
South America has no shortage of iconic and well known tourist destinations. From Patagonia in the south to the Caribbean in the north, the list of unmissable spots is endless. However, there is a lot more to the continent than the beaches of Rio de Janeiro, the ruins of Machu Picchu or the boat trips down the Amazon river. Here is a list of some of the most underrated destinations in this incredible part of the world.

In actual fact, São Paulo is one of South America’s most visited cities, but only because it is the continent’s largest airport hub. Tourists on their way to Rio de Janeiro, Buenos Aires, the Amazon or Macchu Pichu will often make a stopover in São Paulo’s Guarulhos or Congonhas airports before heading on to their final destination. But little do they know that they are missing out on one of South America’s (and the world’s) great cosmopolitan megacities.

While low on obvious tourist attractions, São Paulo has one of the most vibrant alternative cultures in the world, made up of immigrants from all over the planet. The food is incredible, the climate is tropical without being unbearable and São Paulo’s nightlife has a spontaneity and joy which is hard to find anywhere else. All of this against one of the most spectacular man-made landscapes you will find anywhere.

Brazil’s northeastern region is known for its unique culture and gorgeous beaches, but tourists almost always flock to Salvador and Recife, ignoring one of the region’s best cities: Fortaleza. The capital of the state of Ceará, Fortaleza lies on Brazil’s northern coast and is a great place to visit for some incredible beaches and active nightlife.

The surrounding area also has some of Brazil’s most beautiful scenery, with the Sunrise Coast to the southeast and the Sunset Coast to the northwest. Jericoacoara (known as Jeri to the locals) is a majestic beach resort only a short bus trip away from Fortaleza’s city center, with secluded beaches, lots of activities and stupendous sand dunes.

The Amazon region of Brazil is not particularly known for its cities, but when people do flock to one of the area’s urban centers, they almost always head for Manaus, the city slap-bang in the middle of the jungle and on the banks of the Rio Negro. However, Belem, situated in the Marajó Bay where the Amazon River meets the ocean, is arguably the region’s most rewarding and overlooked cities.

Known as the “Gateway to the Amazon”, Belém is a traditional port city with a thriving culture, incredible food, lively music and lush tropical vegetation. The old town is full of colonial Portuguese architecture and the islands which surround the city make for fascinating day trips.

Visitors to Argentina usually stick to the same destinations. The big attraction is the capital of Buenos Aires on the River Plate, while others flock to Mendoza and the country’s famous wine country. However, Argentina is a deceptively large country and so many of its regions are rarely explored by tourists, as is the example of the northwest and the city of Salta.

Located in the foothills of the Andes mountain range, Salta is a beautiful city with incredible landscapes and plenty of charming architecture, also known for its pleasant climate. There is also no shortage of places to visit in the surrounding Salta Province, such as the Salinas Grandes salt flats and the famous Tren a las Nubes (Train to the Clouds), a breathtaking railway which leaves from Salta and winds through the surrounding valleys.

Tucked away in the south of Argentina in the Tierra del Fuego region is the city of Ushuaia, often regarded the southernmost city in the world (although residents of Chile’s Punta Arenas and Puerto Williams dispute this). It is one of the most prominent ports in the region and is the setting off point for many an Antarctic cruise, making it a fairly well-visited spot.

The Martial mountain range to the north makes for some incredible views and there are several boat trips to take you along the Beagle Channel to the south, where Charles Darwin sailed in the 1830s.

Uruguay is often thought of as a one-city country. In many ways this is true, everything in Uruguay runs through its gorgeous capital city of Montevideo and the rest of the country is often forgotten about. However, tucked away in the River Plate and directly facing Buenos Aires is the gorgeous colonial town of Colonia del Sacramento.

A town lost in time, walking around Colonia gives you the impression that you have in fact been transported back into the past. Founded by the Portuguese, Colonia changed hands several times over its history between Portugal and Spain, even being briefly controlled by Brazil in the 19th century. The city has a really unique look and feel, and is well worth a visit from the nearby tourist hubs of Buenos Aires and Montevideo.

Located close to the Chilean capital of Santiago, Valparaíso is one of the most charming and idiosyncratic cities in the continent. Situated on the Pacific coast, Valpo is known for its colorful and chaotic urban landscape, with its narrow streets, staircases and gorgeous views. In a way, it has a similar atmosphere to Naples or Marseille, equally vibrant, chaotic, yet beautiful port cities.

Legendary Chilean poet Paulo Neruda lived in Valparaíso and fell in love with the city, often citing it in his poems. His old house, La Sebastiana, situated on a hilltop, is now a museum dedicated to Neruda and is well worth a visit. 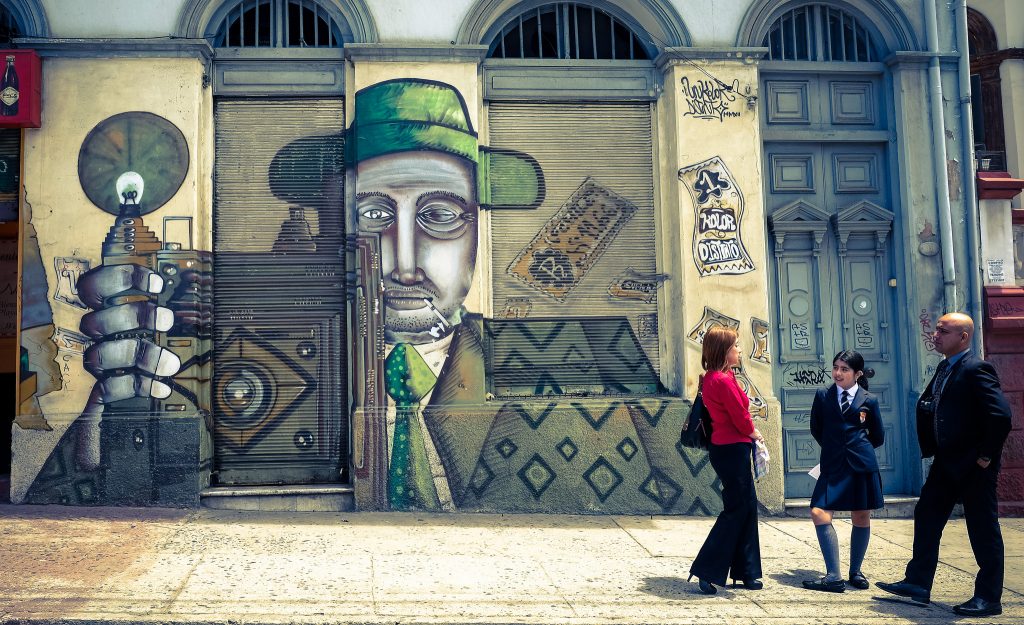 Arguably, Paraguay is South America’s most overlooked country. When people think of it, they think of Ciudad del Este, the frantic city on the border between Argentina and Brazil, where foreigners come to fill their pockets with cheap electrical goods before heading back home. Asunción, Paraguay’s capital, gets little attention. The truth is, this is the poorest nation of the continent, still arguably feeling the effects of the Triple Alliance War of the 1860s where Paraguay lost an estimated 70% of its male population.

However, there are beautiful sites and things to do in Paraguay. One example is the city of Encarnación, to the south of the country on the banks of the Paraná River, Paraguay’s border with Argentina. The city has several impressive beaches, a lovely boardwalk and is very close to the Jesuit Missions of La Santisima Trinidad de Paraná and Jesus de Tavarangue, which are amazing preserved Jesuit constructions from the 17th century.

Bolivia has plenty to offer to tourists, from the incredible capital city of La Paz, the Andes and the breathtaking salt flats in Salar de Uyuni. One place which should not be missed, however, is the Yungas Road, also known as the Camino de la Muerte, or Road of Death.

Linking the northern Yungas region to La Paz, the Yungas Road is an incredibly high and narrow road which snakes through the region’s hillsides. Seeing as it has very few guard rails and looks over cliffs of up to 2,000 feet, the Yungas Road has become an attraction for thrill seekers who take on the so-called “Most Dangerous Road in the World” on bicycles or small cars. The views are incredible, although it is certainly not an ideal location for anyone with a fear of heights.

Tucked in between Ecuador’s two main cities – the capital of Quito and the port city Guayaquil – is the idyllic spa town of Baños de Agua Santa. The city is known as the gateway to Ecuador’s Amazon region and sits in the shadow of the imposing and beautiful (and active) Tungurahua volcano.

Baños itself is an excellent destination, surrounded by waterfalls and thermal baths alongside quaint and intricate architecture. From there, it is easy to take a variety of hikes to explore the Tungurahua region, including the volcano itself. Baños has also gained a reputation for being one of the best adventure sports locations in the country, with ample opportunities to practice abseiling, zip-lining, gorge walking and bungee jumping.

Another “Gateway to the Amazon”, Iquitos is, in fact, the most inland port city in the world, sitting no less than 2,000 miles upriver from the ocean. Visitors to Peru usually flock to Machu Picchu, the nearby city of Cusco, or the exciting capital of Lima, ignoring the country’s Amazon region. Of course, one reason for this may be the distance factor: Iquitos is situated way to the northeast of the country, being closer to Quito, or even Cali in Colombia, than it is to the rest of Peru’s major cities. What’s more, Iquitos is one of the largest cities in the world which cannot be reached by road.

Truly this is a completely different Peru to that of the more populated center and south. It runs at a faster pace than the rest of the country, and though some people may find the mayhem a little stressful, it is part of what makes Iquitos so unique. The architecture is fascinating, with a number of seemingly out-of-place mansions from the 1920s and 30s, and the city’s island neighborhood of Belen is a must-visit. Recently, Iquitos has gained a reputation for its large number of shamans who brew ayahuasca tea, a powerful hallucinogenic made from jungle plants.

Typically, people visiting the Caribbean will head to Antigua, the Caymans, St. Lucia, Dominica, or any of the famous (and expensive) islands. However, some of the least known and most beautiful islands in the Caribbean are actually part of Venezuela: Los Roques.

Located 100 miles off the coast of Venezuela, due north from the capital city of Caracas, Los Roques is a paradisaical archipelago of over 300 islands, all part of a Venezuelan national park. The islands are full of secluded beaches, gorgeous coral reefs and incredible wildlife, an excellent option for anyone wanting to visit the Caribbean and escape the popular tourist spots.

The national park of Serrania de la Macarena in central Colombia is regarded as one of the most biodiverse areas in the world. With mountains, jungles and grasslands, as well as an incredible array of flora and fauna, it truly is one of the best spots in South America for nature tourism.

While there are millions of reasons to visit Serrania de la Macarena, most people come to see the jaw-droppingly beautiful Caño Cristales river. A tributary of the much larger Guayabero River, Caño Cristales is known as “The River of Five Colors”, due to its astounding colorful appearance. Aquatic herbs growing on the riverbed turn the water a striking range of different colors, from red and yellow to green, blue and black.