11 Films You Really Shouldn't Watch Before Traveling to South America 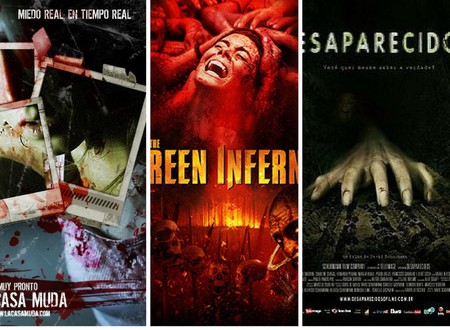 Movies best not to watch before a trip to South America

Nothing like a good old horror movie to get the heart pumping and hair standing on end. That is until it’s based in South America where you just happen to be traveling to soon. While these terrifying movies are definitely worth watching for their cinematic appeal, perhaps it’s best to wait until you’re back from your trip before viewing them.

A group of six friends heads to Ilhabela, a tropical island just off the coast of São Paulo (this island does exist by the way, and is definitely worth checking out), for a special VIP party. One of the conditions of this party is that everyone has to wear a camera around their neck which records at random without warning. During the party, a couple sneak off to make out in the woods yet the guy panics and gets lost. Later, his friends go looking for him, only for the entire group to vanish. The cameras are later found, revealing the terrifying fate of these five friends.

This is more a psychological thriller yet it still sends chills down the spine. A young doctor is managing the transfer of a group of patients between two state hospitals in Rio de Janeiro. The next day, the physician realises that one of the patients is missing and has completely disappeared off the grid – there is no trace of the patient’s details anywhere on the system. As the doctor attempts to search for clues to unravel the mystery of this disappearance, he slowly detaches from reality and begins to lose his mind.

Based in Espirito Santo, a small state in Brazil north of Rio de Janeiro, this film follows the lives of a small, poor community that totally depend on fishing and collecting crustaceans as a means of survival. The water which these people depend on becomes heavily polluted, affecting their livelihood. However, it turns out that this is the least of their worries as the contaminated swamp becomes a breeding ground for zombies. Slowly, the community is killed by zombies, yet one man will do anything to save the girl he loves.

This award-winning film makes compelling viewing, yet if you feel nervous about visiting Rio then this film will not ease your concerns. Based in a crime-riddled favela known as Cidade de Deus in Rio de Janeiro in 1960s, the film explores the lives of two boys, one who decides to become a photographer and goes about recording the local violence, and the other who becomes a murderous drug-dealer engaged in a local drug war. Violent, gripping and shocking, this film touches upon reality in Brazil’s drug underworld yet as a tourist coming to Brazil, you shouldn’t let this cloud your perception of what touristy areas are like as they tend to be worlds apart.

This film is one of the most chilling, given that it is based on a true story of an incident that took place in a small village in Uruguay in the 1940s. A girl called Laura and her dad spend the night in a dark, rural cottage in order to start repairs on the building early the following morning. As night falls, Laura hears a sound outside that gets louder and louder before moving into the upstairs of the house. Laura wakes her dad who goes upstairs to investigate. The rest of the film shows Laura’s fear in real time as she waits alone before realizing the terror of the mystery sound.

Seeing this Colombian film is a must but when you watch it depends on your perspective – if you feel concerned about dangers and gangs in Colombia, watch this when you get home; if you’re feeling breezy about the whole situation, watch it beforehand to get some insight into Colombia’s history with drugs and gangs. The action-packed film is set in the poor and crime-riddled areas of Medellin and follows a group of friends that grew up there. After one of them is killed during a police shootout, another one steals a car and becomes listed as a wanted man by the police.

A suspense film where a scientific experiment goes horribly wrong, Nervo Craniano Zero follows the story of a successful writer who ropes her former boyfriend in to experiment with a brain chip. They decide to test the chip – known as Melpomene – on a naive, countryside girl. However, the chip doesn’t perform the way the couple expected and the girl can no longer eat, sleep, smell, or even die. The film explores how what should have been a simple scientific procedure turns into a nightmare.

An Argentinian film, the set is based in a small, rural house outside Buenos Aires. A man is unhappy with the way his past relationship ended and decides to explore these feelings with his ex-girlfriend. However, it seems that his ex has gone missing. The man, with the help of his best female friend, discovers that his ex met with a handsome man on the internet. After finding the address of where they met, the man waits outside the house as his friend enters. Realising something must have gone wrong after his friend fails to return, he breaks into the house to find two men torturing a girl and his friend trapped with explosives on her head. He frees his friend before heading off to find his ex-girlfriend.

An Italian priest has a vision of creating Brasilia, the capital city of Brazil, which is constructed and where the film is set. He is then warned that when he dies, mankind’s behaviour will be evaluated for 120 years and the consequences of this will become apparent in the generation that follows. The priest dies, mankind behaves in a way that is deemed unacceptable, and Brasilia is condemned 120 years to a wave of killer zombies. If you love the first film, then there is the second – A Capital dos Mortos 2: Mundo Morto – released in 2015.

Elite Squad explores the complex network of police and crime gangs in Rio de Janeiro. Although it gives a fascinating insight into the realities and complexities of this fragment of society, its favela violence, shootouts and brutal killings may leave you feeling more than anxious about an upcoming trip to Brazil. Set in 1997, the story follows Captain Nascimento who is seeking out a successor for his role. Troubled by his past and Rio’s current situation, the BOPE leader (a special kind of police force in Rio) has to fight against drug dealers in an attempt to secure the city before the Pope arrives.

The Green Inferno is an American film based in South America’s mysterious and huge Amazon rainforest. A group of young activists goes to the Amazon to try and save it by challenging mass deforestation and protecting the indigenous tribes. However, the plane crashes en route and ploughs into the depths of the Peruvian jungle. The college students survive yet they realise the worst is far from over. They are taken captive by a tribe who just so happen to be hungry, avid cannibals. The scenes turn gory as one by one, the activists are gruesomely eaten.