The 10 Most Weird And Wonderful Foods From Latin America 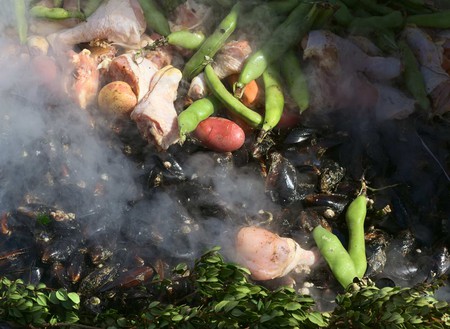 Latin America boasts a wide variety of culinary traditions and styles, from its indigenous cuisines to ingredients and recipes introduced by immigrants from around the world. We discover ten of its more unusual dishes – from the creative to the bizarre. Whether it’s eating creepy crawlies or finding new ways to do a barbecue, there is plenty more to try than just tacos, rice or beans next time you’re in Latin America. 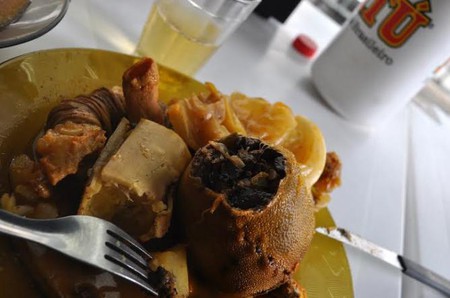 From Brazil’s semi-arid northeastern interior to the Scottish highlands, buchada finds its unlikely cousin in haggis. Tough and resilient goat meat is the staple in this harsh climate and buchada is not for the faint-hearted. The goat’s stomach is opened up and stuffed with whatever other innards are available – intestines, liver, lungs, heart – and so on, before being sown up into a pouch and cooked. Well seasoned, a mouthful of this delicacy evokes a burst of flavors and, most of all, textures. It may take a bit of courage to try, but for those who can appreciate haggis, buchada is a must-try when in Brazil. 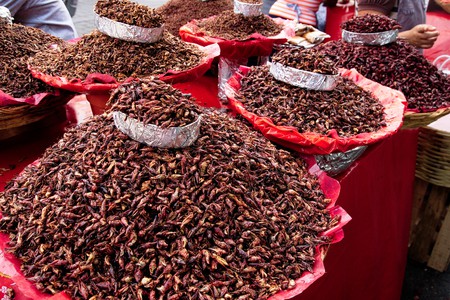 Packed full of protein and nutrients, low in fat and grown sustainably – this traditional Oaxacan snack may hold the key to our culinary future. It consists of grasshoppers, fried in chili, garlic and lime, packed full of flavor and served on their own or in tacos. While some may be reluctant to try these crunchy treats, consider that many traditional grasshopper-eaters consider crustaceans and seafood to be revolting – it’s all a matter of perspective. 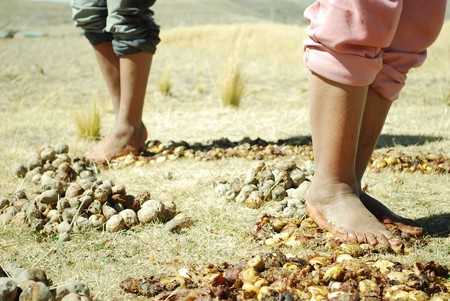 In the semi-arid highlands of Bolivia, vegetation is few and far between and potatoes play an essential role in nutrition. Some are used to make chuños, a creative and unusual process that involves letting them freeze in the sub-zero, nocturnal Andean temperatures, thaw in the morning sun, freeze again the following night, thaw again – and so on. Finally, the potatoes are stomped upon in order to peel them, frozen and thawed one more time for good measure and added to soups and stews with other Andean foods such as llama. Try chuños in La Paz, the highest capital in the world. 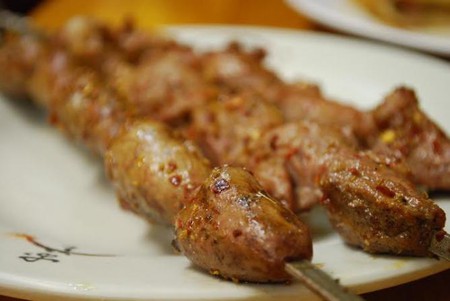 These chewy little morsels make a great addition to Brazil’s omnipresent rice and beans combo and are widely eaten across Brazil. From barbecues to business lunches and snacks, you can count on being served a handful of chicken hearts wherever you go. They can be seasoned with simple salt and pepper, but sometimes come marinated in rich mixtures of garlic, red wine and herbs. Try corações de frango at any churrascaria in São Paulo or Rio de Janeiro. 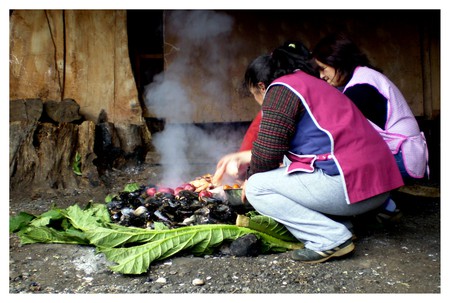 Not so much weird as simply wonderful, this indigenous Chilean cooking method is a true spectacle. Firstly, a large hole is dug in the ground and lined with red-hot stones heated in a bonfire. The hole is then covered with large ‘nalca’, rhubarb leaves. One by one, layers of food – anything from fish and mussels to meat and vegetables – are placed inside, separated by more leaves. Finally, earth and sand is pressed on top of the hole to create a natural pressure cooker in the ground. After several hours, depending on the quantity of food inside, the whole thing is dug up once again and served piping hot. Try it on Chiloé Island, where the curanto en hoyo originated. 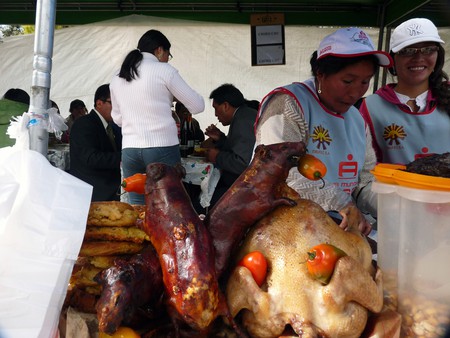 Peruvian dishes such as ceviche are now internationally renowned, but another staple has been conspicuously absent – roasted guinea pig. This is a controversial dish for those who grew up with the furry creatures as beloved pets, but in Peru, guinea pigs are no more companions than chickens, and are therefore a prime choice for dinner. Sometimes, the meat is served off the bone and could be easily mistaken for richly spiced rabbit. However, the true Peruvian way consists of eating the whole thing, barbecued and served on a spit. Try cuy in the Andean capital of Cusco. 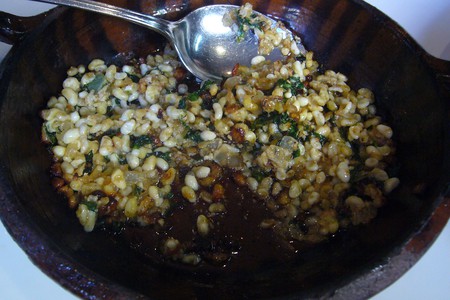 Known as the Mexican caviar, this creamy, nutty delicacy makes a perfect addition to tacos with guacamole. Yet, as much they may resemble harmless pine nuts or corn kernels, this ancient Mexican dish is not for the faint-hearted – being ant larvae. Escamoles are harvested from the manguey and blue agave plant, otherwise used to make mezcal and tequila. However unappetizing they may seem, escamoles are harmless and are definitely worth a try. Dig into a portion in Mexico City, where they are commonly eaten with tacos. 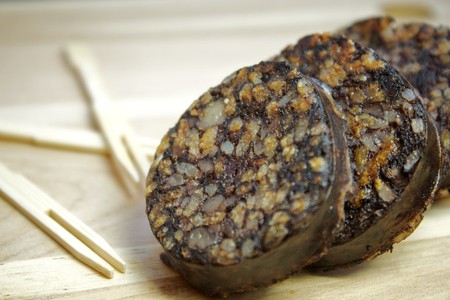 Blood sausages are hardly unique to Latin America, but the Argentine morcilla deserves a mention as part of the country’s celebrated barbecue, the formidable ‘asado’. Pig’s blood is cooked with a variety of fillers, such as onions, rice or breadcrumbs, while flavored with paprika and garlic. The result is a creamy and intensely flavorsome sausage, the perfect complement to a rich chunk of barbecued steak and a powerful Malbec red wine. In neighboring Uruguay, locals also enjoy a sweet type of morcilla, with sugar, raisins, nuts and orange peel. Try a morcilla with an asado in Rio de la Plata, the heartland of gaucho culture. 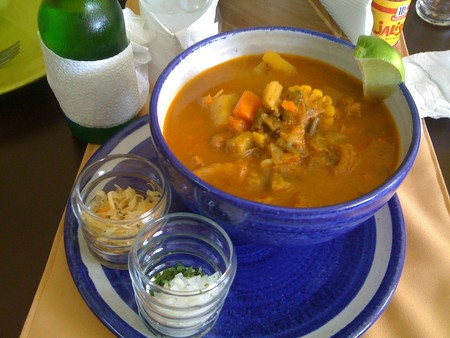 Variations of Sopa de Mondongo are found across Latin America, but it is best known in its Colombian incarnation – a thick, chunky soup full of pork meat, sausage, and most importantly, beef tripe. The tripe soaks up all of the spices and seasoning used to make the punchy broth and the result is a delicious, fiery stew served with rice and cool avocado to balance the flavors. Perfect for a hearty, tropical lunch. Try sopa de mondongo in Colombia’s hip capital, Bogotá.

This dish is really more a feat of engineering, patience and sheer strength than anything else – an entire cow, in one piece, strung over a bonfire and left to cook overnight. Nothing typifies the rugged, outdoorsy spirit of the gaucho cowboys better than cooking a vaca entera. All you need is a cow, a heavy-duty steel truss, block-and-tackle and a very large team of helpers at hand. Remember to invite a few dozen of your best friends to help you finish it. Vaca Entera is not going to be easy to find – in the meantime, head to a steakhouse in wine country for the next best thing.