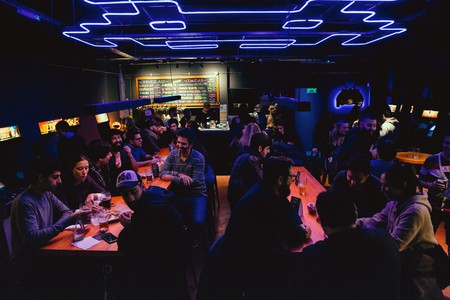 Right in the heart of Villa Crespo, a nondescript facade appears dull and uninviting. It’s nearly impossible to guess that when the sun goes down, a few feet away from the door, an electronic symphony of beeping sounds rises in crescendo. Slowly lighting up, the Arcade Club Social comes to life, a refreshing newcomer on Buenos Aires’ nightlife scene.

In the last couple years, Buenos Aires has seen a surge in arcade bars. These places attempt to capture the ’80s scene of video games as a social experience. With craft beer and excellent food, arcade bars have become a staple of the city’s millennial crowd, who can spend many nights a week trying to break that high score on Street Fighter or even Wonder Boy. 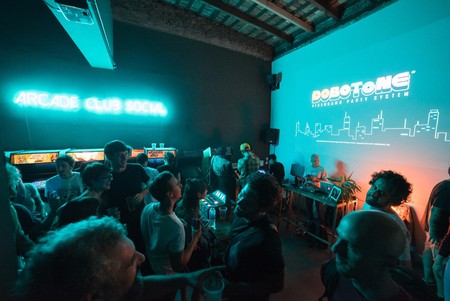 Although in retrospect it may seem obvious to want a night spot devoted to the early-’80s golden age of arcade video games, Arcade Social Club only opened its doors in early 2017—and was the first of its kind in Buenos Aires. It’s placed at an undisclosed location, as the owners prefer to keep the whereabouts hidden, with only word-of-mouth directions, drawing inspiration from the Prohibition-era speakeasy bars. Part of the game is to find the address online or through someone that has been there before. 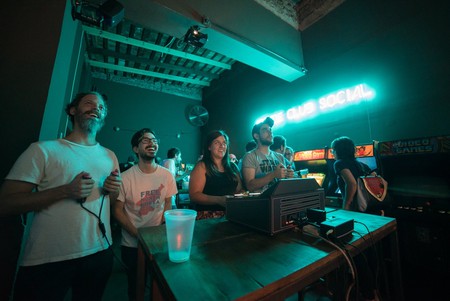 Inside Arcade Social Club, visitors can find a rich selection of classic video games—from Pac-Man, Tetris, Mortal Kombat, or The Simpsons, all the way to Michael Jackson’s Moonwalker—selected by Emi Mihovilcevic and Anita Etcheto, its founders. They wanted to bring back the long-gone underground culture of adult gaming. The club regularly hosts indie game developers showcasing their creations, such as Videogamo’s DOBOTONE, a local award-winning five-player video game console specially designed for parties.

Just over a year after Arcade Club Social opened, a new venue was getting ready as well. With an exquisite mix of craft-beer options, video game lore, and hipster aesthetics, Bar El Destello opened in early 2018. Under the glowing neon light projected in the shape of a space invader, friends can share a wide variety of locally brewed beers while the arcade machines happily beep and light up as the players insert their coins. With tall glasses of beer sitting within hand’s reach, the scene looks as if taken from an ’80s movie—one where, somehow, people have smartphones. 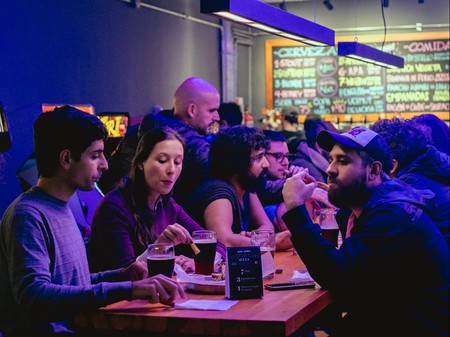 With a wide variety of craft beers, finger food, and boutique video games, this bar in Buenos Aires gets the best of each world | © Bar El Destello

According to Santiago Idelson, one of its owners, “The inspiration behind the bar came from recreating the mystique and essence from arcade bars featured in movies such as Robocop, Karate Kid, or Back to the Future. Neon lights, weird haircuts, and arcade machines lining the walls, that strangely recall the Mos Eisley Cantina from Star Wars. In sum: movies, music, arcades, drinks, and great food.”

It seems the bar opened right in the midst of an ’80s revival trend invigorated by films and series such as Stranger Things, It, and Ready Player One, which the city’s arcade lovers gladly welcomed. Nostalgia can make a good business model even better.

In an attempt to further excite the bar’s crowd, Idelson and his partners organized a series of social events at El Destello. Starting with a showcase of actors dressed up as Mortal Kombat characters, the bar then upped the ante by organizing a series of exhibitions. The first one was devoted to the “San Junipero” episode of Black Mirror, a fan favorite that delighted the audience with seemingly endless references to the arcade culture of yesteryear. Another exhibition focused on the making of NAVE, another VIDEOGAMO creation, a survival space-shooter that has no existing copies anywhere on Earth. Both events were so well received that they are already working on the next.

“In the long run, we aim to become a venue of cultural relevance, while maintaining a coherent overarching theme,” says Idelson, who’s had curatorial experience. 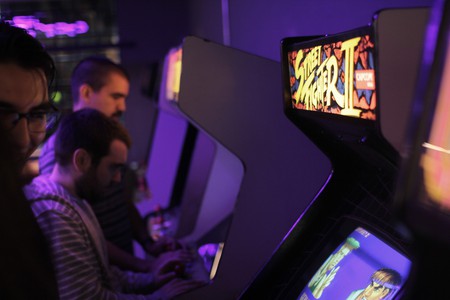 Although some of the games available are more than 30 years old, they haven't lost even a bit of their fun | © Bar El Destello

Although similar places in the U.S. (such as “barcades”) are marketed toward heavy users, in Buenos Aires these bars aspire to attract an entire generation that grew up playing with arcade machines, welcoming both heavy and casual users to feel at home again. A few decades ago, while the golden age of arcade video games started to fade in the north, in Argentina it was becoming a staple of summertime, with beeping machines of joy present in every beach town on the Atlantic Coast. Back then, these arcade machines were known as fichines, in reference to the fichas (coins) needed to make them work. Only to disappear once again a decade later, the arcades offered a unique atmosphere—and it’s exactly this spirit that these bares de fichines are aiming to capture.

As to which is his favorite game, Idelson without hesitation mentions Double Dragon, which he first encountered as a teenager in the ’80s when visiting a small town on the Atlantic Coast. Its universe of gang members and baseball bats, as fierce as it looked, was no match for the two brothers making their way by punching and kicking. “Despite the pixelated graphics, I lived it as an adrenaline-fueled experience reminiscent of Walter Hill’s The Warriors. It’s interesting to contrast, more than 30 years later, the level of risk and exploration that the game embodied with the hyper-audiovisual games of today, and how it hasn’t lost a speck of its fun.”