The Top Things to See and Do in Recoleta, Buenos Aires 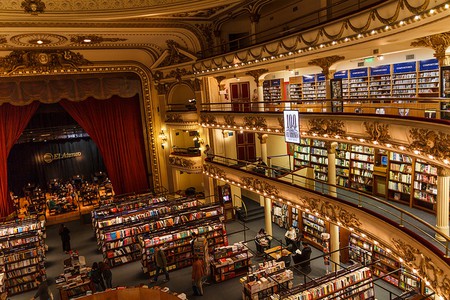 Recoleta’s name originates from a Franciscan Order that established itself in this area in the 18th century. Later, Buenos Aires‘ rich and powerful began to flood in, defining the neighborhood as we know it today. It’s one of Buenos Aires’ best-loved – and loveliest – neighborhoods. Here are the top things to do in the Recoleta district of Buenos Aires. 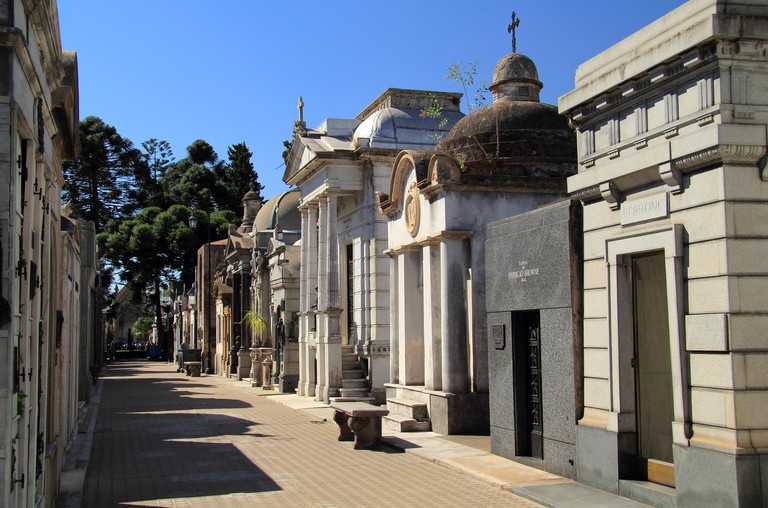 © William Silver / Alamy Stock Photo
Lined with mausoleums as big as cottages, crammed with art deco statues of weeping angels and effigies of forgotten statesmen, this labyrinthine city of the dead is a place of national pilgrimage. Argentinians congregate here to pay homage at the tomb of their secular saint – Eva Perón – declared ‘Spiritual Leader of the Nation’ by her husband, the president. She died tragically young and is immortalized by a cult of devotion – and by Andrew Lloyd Webber’s musical Evita. This is a must-visit site.

The plushest quarter of wealthy Recoleta is an island of affluence on a low hill between the city and the port. In the 1930s this was the place to live – a dream of France transposed to Latin America, with grand mansions overlooking leafy parks. Today many of the most beautiful houses have been replaced with ungainly concrete towers. But the parks remain – radiating from a grandiose monument to post-civil-war president Bartolomé Mitre. 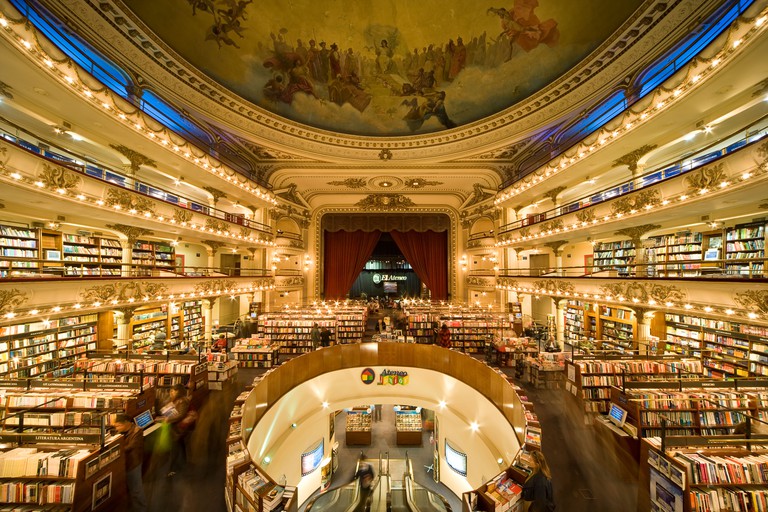 © Wim Wiskerke / Alamy Stock Photo
Back in the Belle Epoque, this was one of South America’s most opulent theatres. It is now the continent’s most beautiful bookshop after a careful restoration returned it to its former architectural glory at the turn of the millennium. Under a glorious dome painted with frescoes, shoppers can browse more than 100, 000 books in the shelves where the stalls once lay, and sip coffee and read on the theatre stage. 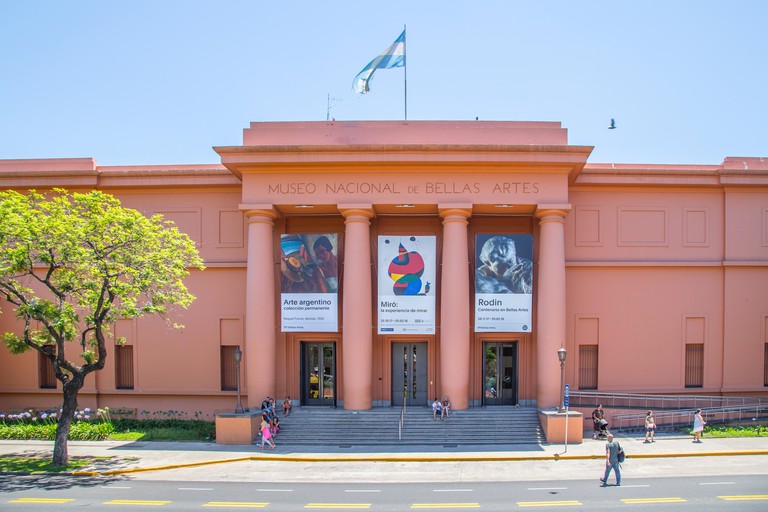 © Hans-Werner Rodrian / imageBROKER / Alamy Stock Photo
The national gallery houses the finest collection of great master paintings – dating from the early Renaissance to the 20th century – in all of South America after Brazil’s MASP. Spanish artists are especially well represented, with important works by Goya, Zurbaran and Ribera, whilst there is a fine selection of Impressionism and post-Impressionism including works from Manet, Monet and Van Gogh. Upper galleries are devoted to sculpture and the national collection – with pieces by Argentinians of international renown including Berni and Quinquela Martín. 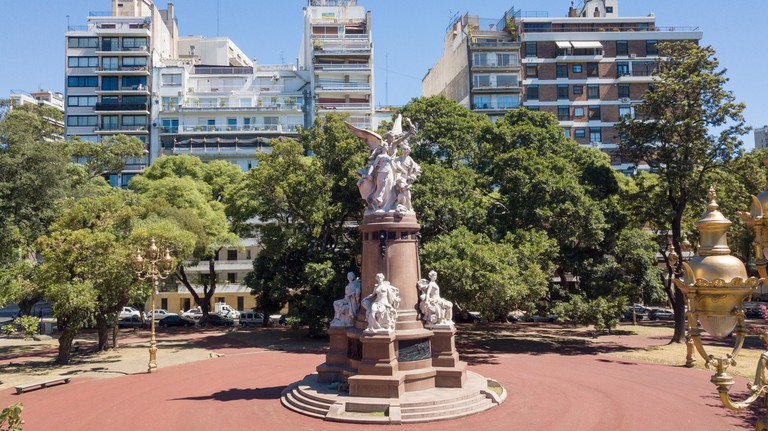 Designed by French-Argentinian landscape architect Carlos Thays, this leafy square lies at the heart of a series of plazas that dot the Recoleta neighbourhood. It was designed as a homage to relations between the two nations and is sprinkled with grand sculptures romanticising their joint history. Most notable are Émile Peynot’s 1910 bronze bas reliefs juxtaposing glorious French and Argentinian historical moments – including the Storming of the Bastille and the Battle of San Lorenzo, fought in the Argentine War of Independence. 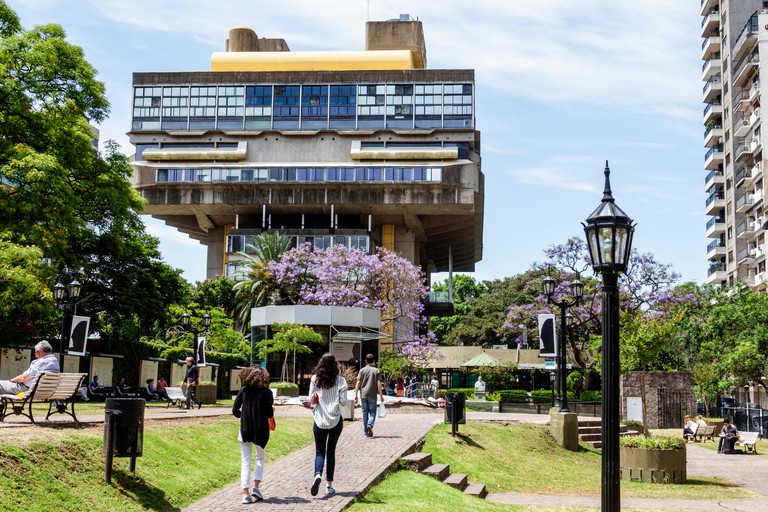 © Jeffrey Isaac Greenberg 18+ / Alamy Stock Photo
As well as holding Argentina’s national archives and book collection, the national library is a monument to dictatorship. And a fitting one – it is a towering, brutalist edifice that looks like a government building from an Orwellian dystopia. Its construction was politically motivated – built on the site of Juan and Evita Peron’s demolished palace during the military dictatorship (1970-1971) of General Roberto Marcelo Levingston. It is named in honor of Argentina’s first dictator, Mariano Moreno. 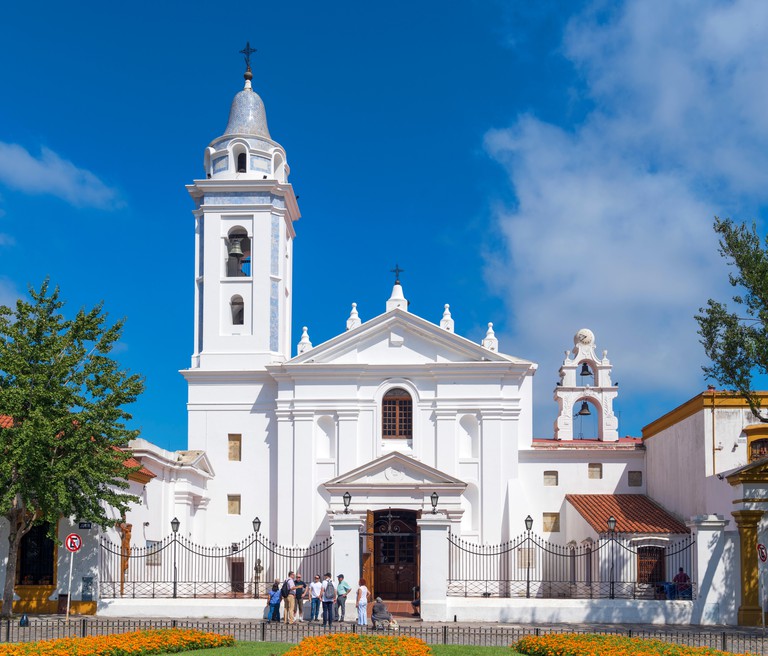 With its elegant belltower and harmonious neoclassical facade, this early-18th-century Jesuit church in Gomero de la Recoleta park is one of Buenos Aires’s prettiest colonial buildings. It looks particularly beautiful at night – tastefully lit, surrounded by trees and set against the dark backdrop of the Recoleta cemetery. It’s worth ducking inside to see the baroque gilt reredos and silver altar, which has relief carvings of indigenous American decorative themes.

This large public park, on the corner of Libertador and Callao avenues, is named in honour of Carlos Thays, the Parisian born French-Argentinian landscape architect who was the Buenos Aires Director of Parks in the late 19th century. Thays was responsible for the Parisian feel of the city’s green spaces, with their gardens and stately sculptures. He designed the Plaza Francia, the Buenos Aires Botanical Gardens and the Parque Tres de Febrero in Palermo and his work was always ambitious in his scope. 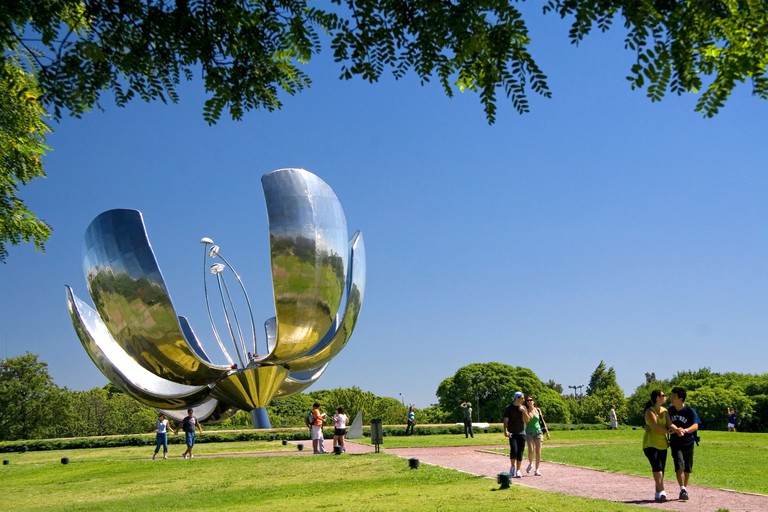 The giant stainless-steel-and-aluminium flower in Plaza Naciones Unidas park recalls Anish Kapoor’s monumental work Cloud Gate in Chicago. Like that sculpture, it is reflective on all sides and mirrored in a pool at its base. Designer Eduardo Catalano intended the flower to be a symbol of hope. At sunset the petals close and the sculpture is infused with a lambent amber glow. It reopens in the morning at 8am, symbolizing the regeneration that comes with dawn. 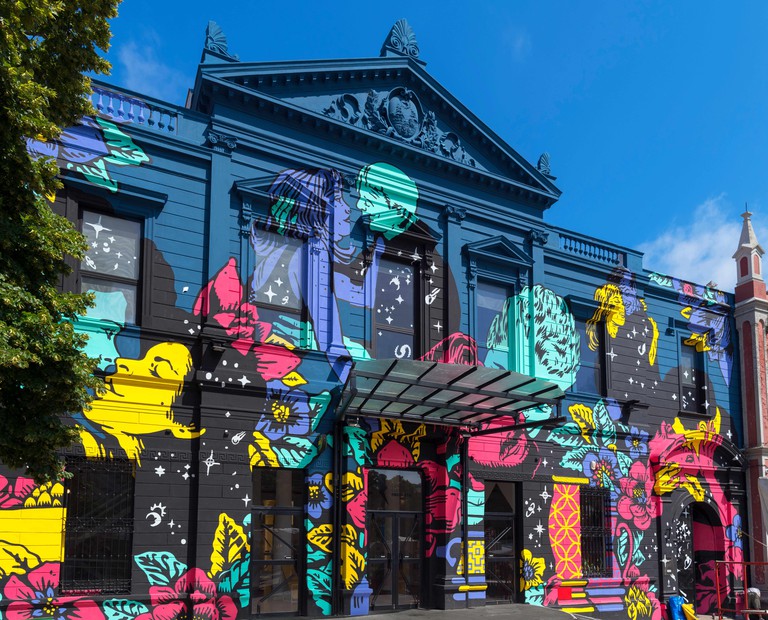 What used to be an old folks’ home was given a new lease of life when it reopened in the Millennium as a performing-arts and exhibition space orientated to young Porteños (Buenos Aires residents). There’s a lively programme of events and workshops, which range from hip-hop and contemporary dance to drawing and painting. There’s also a cafe-bar, an art shop and plenty of open spaces in which to enjoy the sun and the views of adjacent Gomero de la Recoleta park.