The Ultimate Guide to Climbing the Cerro Aconcagua 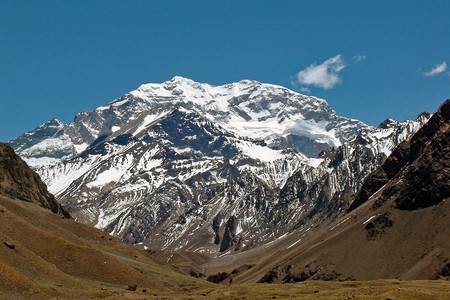 The Cerro Aconcagua is South America’s answer to Everest. The highest peak in the world outside Asia, Aconcagua is actually just 6,000 feet (1,600m) lower than Everest. Located in the Argentine province of Mendoza close to the region’s capital, Mendoza city. This Andean giant is a popular destination for climbers of all levels, and we have combined a list of things you need to know before attempting to conquer the famous Cerro Aconcagua.

Cerro Aconcagua is situated in the Andes mountain range, 70 miles (112km) northwest of Mendoza city and only nine miles (15km) from the Chilean border. Its summit is 22,841 feet (6,962m) above sea level, making it the highest peak in both the Western and Southern Hemispheres. It is part of Aconcagua Provincial Park and has a number of glaciers, the largest of which is the six mile (10km) long Ventisquero Horcones Inferior. The climate on Aconcagua can be perilous, and high winds and storms are common. If there is a thin layer of smoky looking clouds around the summit, it would be wise to consider climbing another day, as this is the sign of an oncoming storm. It is advisable to try the Aconcagua ascent in high season, which is December and January, the height of Argentine summer, but climbing season runs from November to February. In high season, the climate is warmer and conditions are milder, and there is more infrastructure in terms of guides and mules for support. 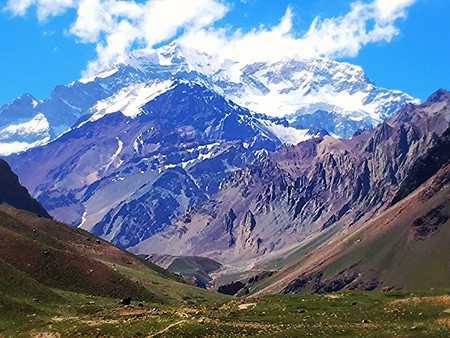 Aconcagua is one of the most popular mountains in the Seven Summits collection of mountains, the seven highest mountains on the world’s seven continents. In fact, it is the second most climbed of the seven after Everest. This is mainly due to the fact that it is considered an easy mountain to tackle despite its height, and it is often referred to as the highest “trekking peak” in the world. However, due to its location, and of course its height, the main problem that climbers encounter are difficulties with the altitude.

Climbers of all levels tackle the main routes every year, but although it is not necessary to be a technically skilled climber to undertake the ascent, it is important to have a high level of aerobic fitness. Reportedly, only 40 percent of climbers who tackle the mountain actually reach the summit, the rest having to bow out early because of altitude sickness. Ensure that you are sufficiently acclimatized to the altitude before commencing the climb. 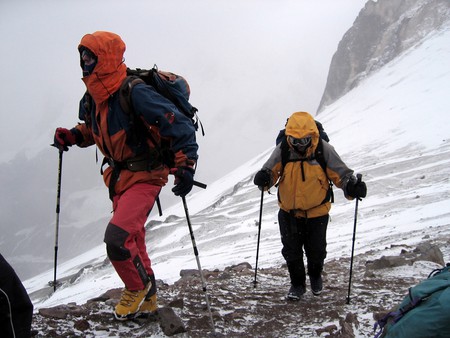 Seeing as it takes around 20 days to complete the entire Aconcagua climb, lots of prior preparation is needed. Physical fitness is the most important thing to take into account when tackling Aconcagua, and leg strength in particular is key to a successful climb. Four to six months of consistent training prior to the climb is recommended, including building stamina by running or cycling, weight training to build strength and muscle, and getting used to carrying weight, as it is probable that at least some of your climb will entail carrying a rucksack.

For most of the main routes, it won’t be necessary to do any technical preparation, as it is mainly trekking, but if you plan on climbing some of the lesser-known routes, ensure you are comfortable using equipment such as crampons and ropes. Again, the altitude is the main issue facing climbers, and it is important to build a certain number of acclimatization days into your climbing schedule, as these will allow you to be prepared for the next leg of your ascent. Also, it would be wise to purchase travel or trekking insurance in the event of anything going wrong. 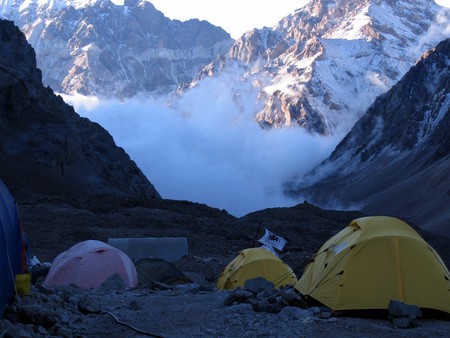 On Aconcagua, there are a number of main routes that are highly traversed and of relative ease. Then, there are less traveled routes which require levels of technical skill and ability that only experienced climbers would be capable of tackling. The “Normal Route” and the “Polish Traverse” are the most commonly-taken routes, the Normal Route being considered easier than the Polish Traverse.

The “Normal Route” is essentially a long trek and is a straight run up the northwest ridge directly to the top. Normally it takes about 18 days to complete, starting at the Lower Horcones Valley and climbing the 14,980 feet (4,260m) to reach Plaza de Mulas. There are three camps located along the route, and the mountain is covered in rocks, stones and loose scree, often causing dust storms in high winds.

The Polish Traverse takes about the same amount of time, but starts on the opposite side of the mountain, before crossing it to join up with the Normal Route about 3,280 feet (1,000m) before the summit. As this route is more difficult than the Normal Route, at points you may need crampons and ice axes.

A third route called the Polish Glacier is also popular, but requires much more technical skill. The first portion of this route is the same as the Polish Traverse, but it breaks away to tackle the summit on a direct line. Climbers are afforded wonderful views of the Polish Glacier, but once on the glacier itself, seasoned climbers will know to be mindful of crevasses and deep snow.

Check out this tour company for info and prices if you fancy having a go yourself.