The Top 10 Things to Do and See in Bariloche, Argentina

San Carlos de Bariloche is found in south-west Argentina, in the heart of the country’s lake district. Nestled on the shores of Lago Nahuel Huapi and its corresponding national park, Bariloche offers travellers thrilling outdoors activities as well as a pretty Swiss-style town full of chocolate shops and boutiques. The Culture Trip looks at ten of the best things to do and see in the area.

Aside from its beautiful scenery and national park, Bariloche is famous for the chocolate-box architecture found in its town centre, the Centro Cívico. Any visitor who has been to Switzerland will immediately be reminded of its pretty Alpine houses when they walk through the town. Log and stone buildings are home to souvenir shops, exclusive boutiques, and outdoor activity stores catering to Bariloche’s main tourist demographic. The centre is small enough for a pleasant stroll, and is full of restaurants and cafés. The highlight is the cathedral, with its grand stone walls in a prime position, looming over the lake.

The biggest pull of Bariloche is its national park, Nahuel Huapi. Visitors can simply drive through and admire the scenery from the car, or they can park up and take a walk along one of the many hiking routes. The more adventurous visitor can raft or kayak on the Lago Nahuel Huapi, a lake that was formed from melted glaciers and is surrounded by stunning snow-capped mountains. Visitors can usually book tours and activities through their hotel, or alternatively they can jump in the car and take a drive through the park, and see what’s on offer when they get there. 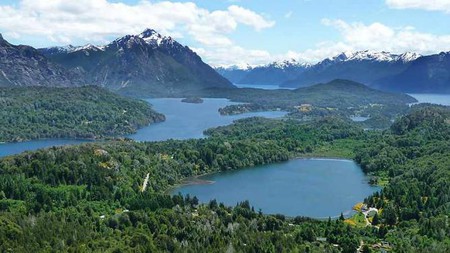 A day trip to El Bolsón

Close to Bariloche is the small town of El Bolsón, to which it is possible to take a day trip (about two hours by car from Bariloche). Its first non-native inhabitants came from Germany, and consequently it has become famous for its production of cheeses and beer. It prides itself on its focus on ecological living and organic farming, and is therefore a popular destination for the liberal-minded. There are also a number of hiking routes nearby, of which one of the most popular is up to Cajón de Azul, a small vibrant blue lake where it is possible to swim. 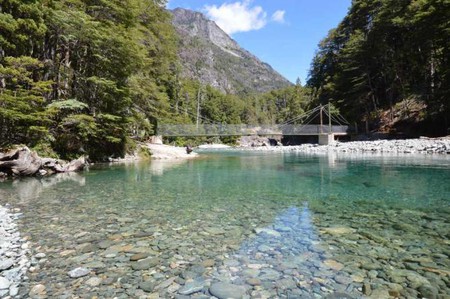 Further out from the city of Bariloche itself is the volcano Lanín. Not in Nahuel Huapi, but instead in bordering national park Lanín, it can be seen from all around the area due to its height of 3,776 meters. It is possible to climb, but by experts only or within an official guided tour group, and even then it is not recommended for the faint hearted. While the volcano has not thought to have erupted for around 10,000 years, it has not officially been declared extinct, due to the occasional tremor. The crater itself is not visible, and is thought to be underneath the glacier found at the peak of the mountain. 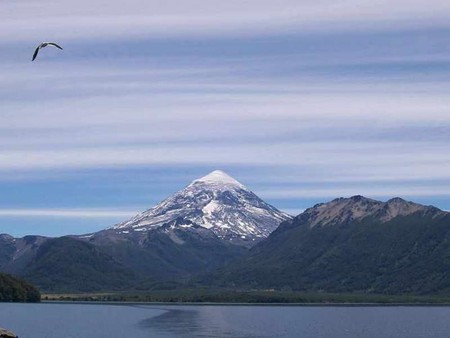 Another small town possible to visit in a day trip from Bariloche is Villa La Angostura, high in the mountains and home to the Parque Nacional Los Arrayanes. An arrayán is a species of tree that is native to the Argentinian-Chilean border, and was important to the native Mapuche people as a source of medicine. Visitors can bike or walk through the forest, or alternatively get a boat across the lake to reach the park. The nearby hiking trails also offer fantastic views of lake Nahuel Huapi. 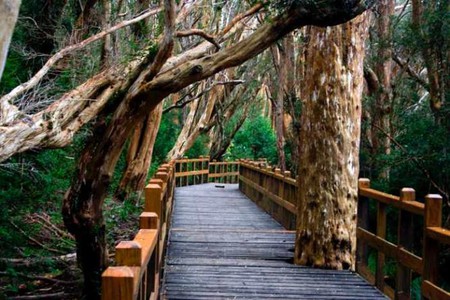 Inside one of Centro Cívico’s Swiss chalets is Bariloche’s museum. It contains a number of exhibits relating to the history of the national park and its surrounding area, specifically archaeological finds, natural history and indigenous artefacts. Most interesting is the Sala Pueblos Originarios, which examines the native people who lived around the area, notably the Mapuche people whose practices are still common today, just across the border in Chile. For a break from the outdoors, this museum provides plenty of information that visitors will find adds to their appreciation of Bariloche and what it has to offer.

To match Bariloche’s famous Alpine architecture, there are numerous speciality chocolate shops in the town centre for visitors to enjoy. Most are located on the main shopping street, Bartolomé Mitre, so they’re hard to avoid and resist the temptation. The most popular shop with locals is Chocolates Rapa Nui, which has existed in the town for generations since it was first set up in the early 1900s by an Italian immigrant. The shop is also home to a café serving desserts and other patisserie items, as well as ice-cream. Other popular shops include Chocolates del Turista (especially for free samples), Mamuschka and Bonifacio.

Cerro Tronador in Nahuel Huapi National Park is the highest mountain in the lake region of Argentina. At the foot of the mountain visitors can see glaciers, which can be heard creaking – especially when huge chunks of ice drop off. It has three distinct peaks, called Argentino, Internacional, and Chileno, so it is easy to identify. It is an extinct volcano, and the surrounding area is full of small lakes and green forests to be explored. The Manso River, which visitors will pass when travelling to Cerro Tronador from Bariloche, is a popular spot for white-water rafting. It is only a couple of hours away from Bariloche, and most hotels offer day tours. 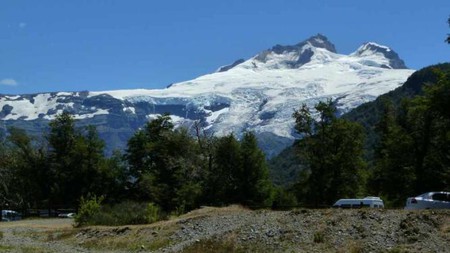 Within the Nahuel Huapi National Park is Isla Victoria, a small island on Lake Hahuel Nuapi reachable by a short boat journey. The island is approximately 31 km² in area, but only about a third of it is possible to walk around due to the difficult terrain. In the past it was inhabited by indigenous people, the evidence of which can be seen in cave drawings scattered across the island. It is a lovely spot for a tranquil walk through its forests, as it is home to a great variety of flora and fauna. The trails are also on boardwalks so it is not too strenuous, and perfect for families. 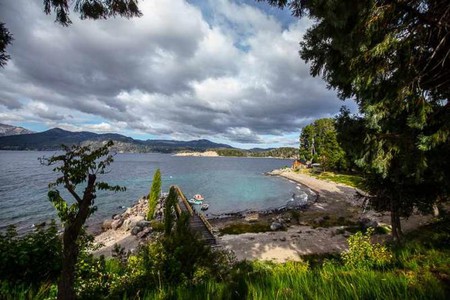 This activity is not possible all year round, but is certainly worth it when the snow is still on the ground. Cerro Catedral is the most popular ski destination in the Bariloche area, and is a short bus ride from the town centre. It is a typical ski resort, but its stand-out feature are the views of the Nahuel Huapi lake and surrounding national park. The staff at the ski centre on Cerro Catedral are mostly from Bariloche and the nearby area, so have good knowledge of the mountain, its preservation and how to ski responsibly.