The Best Theaters in Buenos Aires 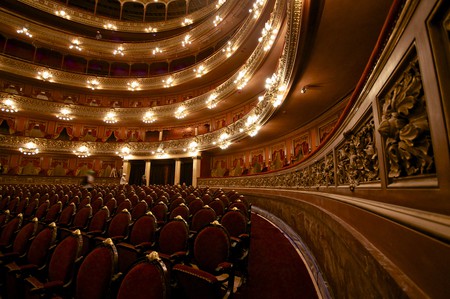 In a large city with a refined cultural scene like Buenos Aires, it’s no surprise that going to the theater is a popular pastime. Over 40 playhouses can be found throughout the city, each with their own distinct atmosphere and audience, with productions ranging from comedy, theater, opera, musicals and concerts. Most are situated in the city center on Avendia Corrientes near the famous Obelisco, a zone considered to be the Buenos Aires version of Broadway. 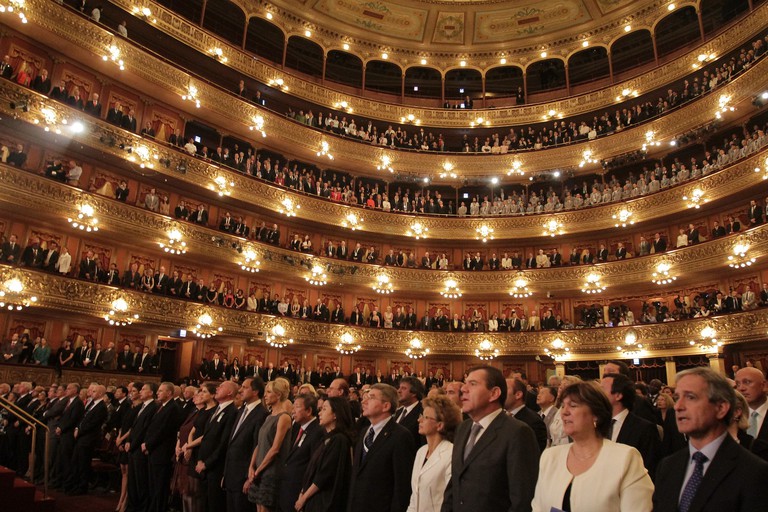 Performance at Teatro Colon | © Gobierno de la Ciudad de Buenos Aires Follow/Flickr
The grandest, most elegant, distinguished and famous theater in the city, Teatro Colón is a national treasure, local landmark and must-see tourist attraction. Built in 1908 to replace an older venue, this is the country’s premier performing arts center with an opera house that is ranked the third best in the world according to National Geographic. Its stunning, 2,500-seat horseshoe auditorium is also rated as having the fourth best acoustics in the world – a source of pride among theater-going Argentinians. Tickets can be pricey, so consider visiting on one of the frequent guided tours instead.
Open In Google Maps
628 Cerrito, San Nicolás Buenos Aires, C1010, Argentina
+541143787148
Visit Website
Give us feedback 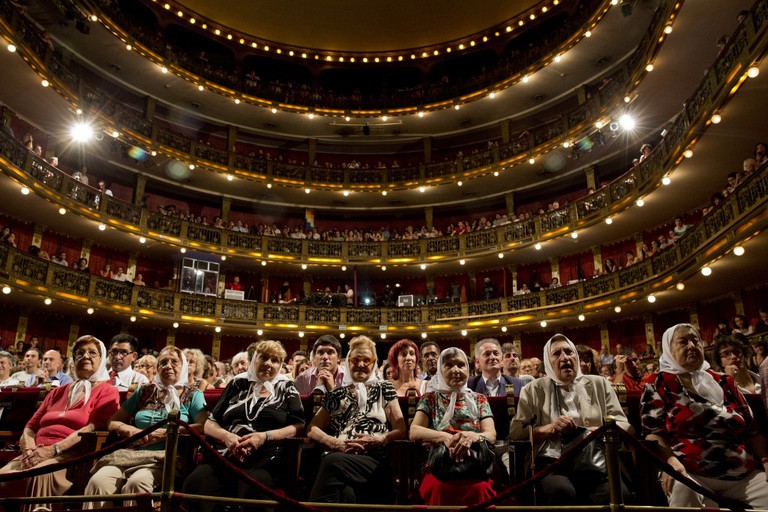 Teatro Cervantes | © Ministerio de Cultura de la Nación Argentina Follow/Flickr
A renowned opera house, comedy hub and the official National Stage, the elegant Teatro Nacional Cervantes is one of the city’s most historic theaters. It was first conceived when María Guerrero, a famous writer from Spain, moved to Buenos Aires in the early 20th century to promote the arts. With help from the Spanish King, she spent her considerable savings on constructing a new theater in the classic baroque style which was completed 1921. The theater has suffered a few setbacks over the years, including dwindling popularity due to the invention of radio and a devastating fire in 1961, but it continues to remain one of the most important in the country. Cervantes features three performance halls, the largest of which seats 860 and has a revolving circular platform on the stage.
Open In Google Maps
815 Libertad, Barrio Norte, AAQ, Buenos Aires, C1012, Argentina
+541148158883
Visit Website
Give us feedback 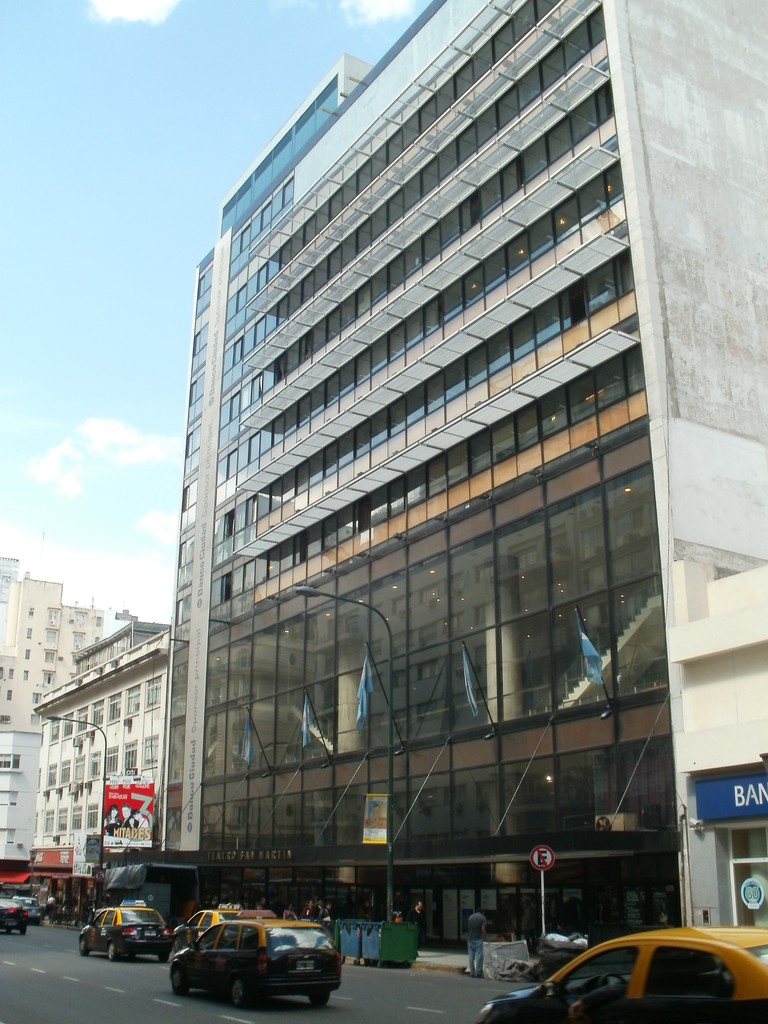 Teatro General San Martin | © En.planicie/Wikipedia
Although perhaps not the most elegant, Teatro General San Martín is one of the most important cultural centers in Latin America. More than just a theater, the 13 story complex also contains a cinema as well as multiple exhibition halls and workshop spaces. Of its three main performance stages, the biggest seats 1,000 people and was built in an Italian style with numerous sculptures dedicated to drama and comedy. Teatro General San Martín was initially conceived in 1908 by a socialist congressman who wanted to build an affordable theater for the common people. It was housed in various places until the most recent building, commissioned by socialist leader Juan Perón, was inaugurated in 1960.
Open In Google Maps
1530 Avenida Corrientes, AAO, Buenos Aires, C1042, Argentina
+548003335254
Visit Website
Give us feedback 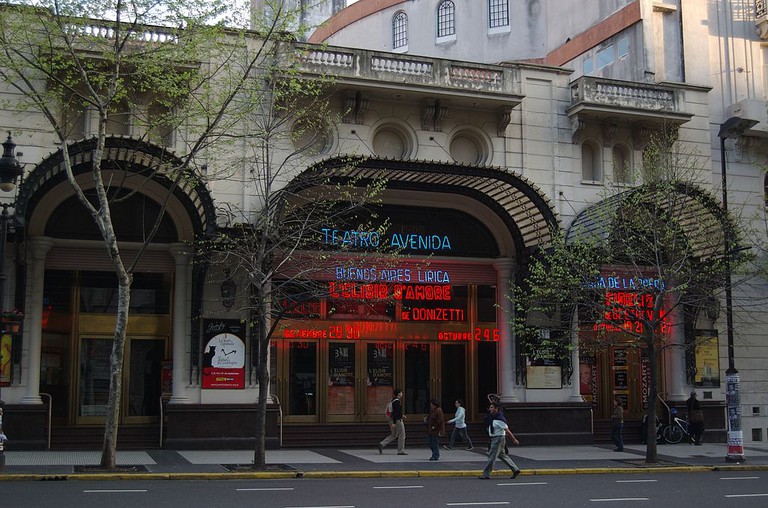 Teatro Avenida | © Beatrice Murch/Wikipedia
Inaugurated in 1908 with a production directed by the aforementioned Maria Guerrero, El Teatro Avenida has been through plenty of ups and downs throughout its lifespan. It first became the city’s main venue for traditional Spanish theater in 1933, hosting frequent performances to large audiences after Teatro Cervantes was declared the National Stage. In time, the popularity of Spanish theater dwindled so Teatro Avenida focused on operettas and zarzuelas instead, which reined supreme until a terrible fire in 1979 practically gutted the building. It finally opened after extensive repairs in 1994 and regained its former glory in 2006 by filling in as the main classical opera hall while Teatro Colón was under renovation.
Open In Google Maps
1222 Avenida de Mayo, ABP, Buenos Aires, C1085, Argentina
+541143810662
Visit Website
Give us feedback 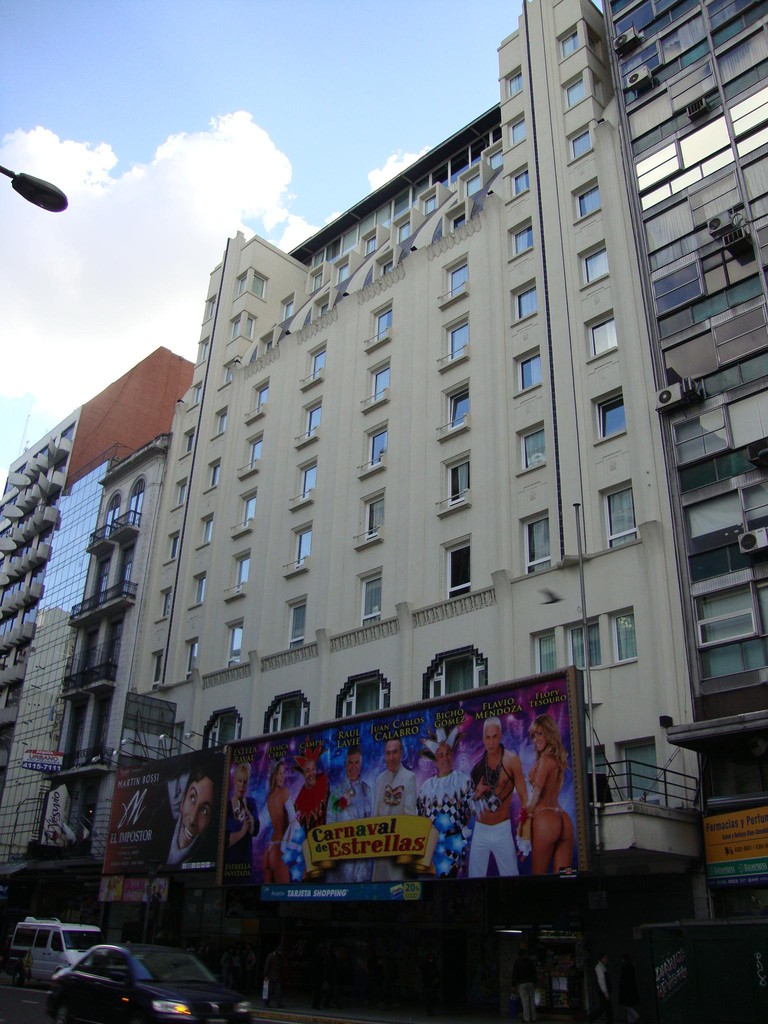 Teatro Broadway | © Elsapucai/Wikipedia
This Art Deco theater was originally constructed in 1930, a time when motion pictures were fast becoming popular with the Argentine public. During that period, theater was forced to adapt to this new form of entertainment by constructing auditoriums that could be used for both film screenings and plays. Both Hollywood and national films were initially screened, although by 1942 it exclusively played Argentine cinema. These days, Teatro Broadway mainly hosts live performances which regularly fill its 2,250 capacity thanks to its excellent acoustics.
Open In Google Maps
1155 Avenida Corrientes, AAL, C1043, Argentina
+541143818214
Visit Facebook page
Give us feedback 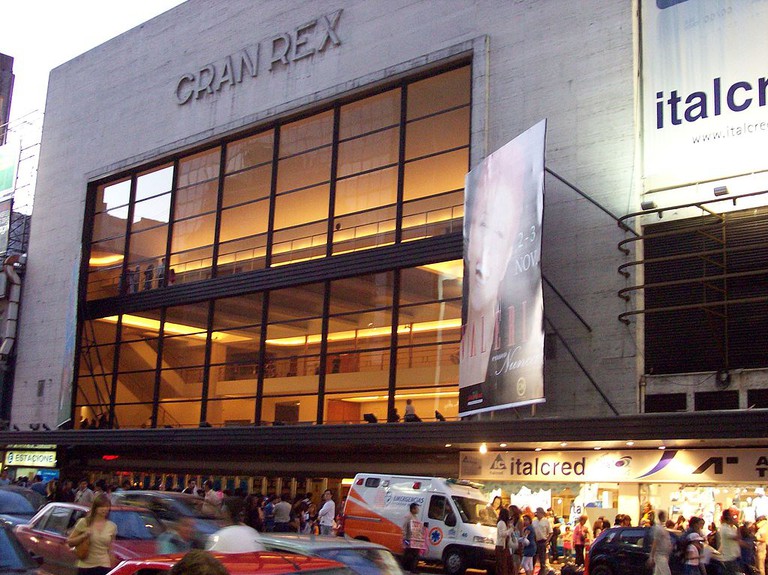 Teatro Gran Rex | © Roberto Fiadone/Wikipedia
Built in 1937, Teatro Gran Rex was the biggest theater in Latin America at the time. This Art Deco style construction was designed by the same architect as the Obelisco, Buenos Aires’ most recognizable landmark, and was inspired by the famous Radio City Music Hall in New York. The massive theater has seating for 3,300 people and its most successful production, Chiquititas, sold over a million tickets in its six season run.
Open In Google Maps
857, C1043AAI Avenida Corrientes, AAI, Buenos Aires, C1043, Argentina
Visit Website
Give us feedback
Give us feedback