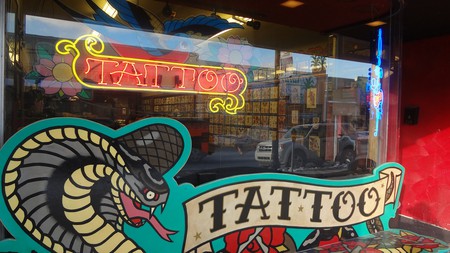 Tattoos, not for the faint hearted | © VasenkaPhotography/Flickr

Argentines like their ink, and nowhere is this more evident than in the capital of Buenos Aires. Tattoo parlors abound, but how do you choose which one is right for you? Getting a tattoo is like getting a haircut: you need to go to someone who’s gonna understand you and your style, and get it right first time, because, unlike a haircut, a tattoo is forever. Let’s check out the best tattoo studios in Buenos Aires.

One of the original and best, Well Done Tattoo is a tattoo artist’s tattoo shop. Mariano Castiglioni heads up this tattoo parlor, whose fame has reached big ink cities like New York and Barcelona, so people know where to come if they are planning on getting tattooed in BA. Castiglioni practiced in the Big Apple and Madrid before setting up shop in Palermo, and now Well Done is the go-to joint for traditional and Japanese-style tattoo work.

This incredibly popular tattoo studio is perfect for first timers and for anyone who values a personalized service. Iris is located in a beautiful building on the busy Santa Fe Avenue in Palermo, and its interiors are colorful, and welcoming. Specializing in nu-school techniques such as watercolors and hand-poked, the artists at Iris are chosen for you based on your desired design, and they walk you through the process, making sure you’re happy with what’s going on your body before they start. They also have a branch in Miami.

Another studio pioneering nu-school styles in Buenos Aires is Would, a studio that has a collection of some of the most impressive artists tattooing in Argentina today. Many of their tattooists also double as visual artists, and Would’s roster spans a broad range of genres, including Alfio’s geometric typography and Vale’s delicate flowers. Message them on Facebook for more info and address.

Hunch leads the way with heavily stylized work reminiscent of illustrations with loose, fluid lines and splashes of color. The artists at Hunch often create figurative work, with a particular emphasis on animals, and many of the designs are realized in a watercolor fashion. The studio even gives seminars on this popular technique if you are interested in trying it out for yourself. Fans of graphic novels will be into the Hunch style. Message them at their Facebook here.

New kids on the block Swim Low have quickly established themselves as the kings of blackwork. A small studio situated on a pretty Palermo lane, the guys at Swim Low are old hat at working magic with a gun, and some black ink, and monochrome designs span the styles of old school, geometric, tribal, and dotwork. Keep an eye on their Facebook page for info on flash days.

Local is a social club, clothes store, café and tattoo shop. The main draw of the tattoo studio is Joel Menazzi, whose unique style is a distinctive mix of old school and black work, with a healthy dose of punk rock thrown in, and a penchant for pop culture references in his work. He’s the best in the biz for a tattoo of your favorite TV/movie/cartoon character.

Perhaps the godfather of all tattoo shops in Buenos Aires, American Tattoo has three studios in the emo haven of Bond Street Galleries in the city’s downtown neighborhood, such is the demand for their ink. The artists themselves will tell you that this is a “McDonald’s” for tattoos, and some may rag on it for being too commercial, but it’s popular for a reason: they are very good at what they do. Drop ins are available for small designs and flashes on Saturdays.