The Best Spots for Street Art in Buenos Aires

A famous artwork by Jaz in Plaza Matienzo © McKay Savage/Flickr

One of the first places in the city to see a proliferation of graffiti, this square in Colegiales is full of amazing street art, from graffiti to big murals by local artist Jaz and British artist Jim Vision that were painted as part of the Meeting of Styles festival in 2011. Check out the art around the Edenor power station, and see the famous headscarves of the Mothers and Grandmothers of the Plaza de Mayo painted above the playground.

This area in Barracas is part of the city government’s design district, and as such it is littered with amazing murals. Some were done as part of the second installation of the Meeting of Styles Festival in 2012, and many other are part of an ongoing project in the area that works with local and international artists in conjunction with the community, a commercial enterprise called Sullair and a street artist called Pol Corona.

Architectural Landmark
Add to Plan
© Radharc Images / Alamy Stock Photo
The area around La Boca’s tourist centre Caminito was the site of one of the city’s more recent street art events, the ColorBA Festival, in which artists from Argentina, Mexico, the Netherlands, the UK and Ireland, among others, participated. Keep an eye out for a large mural of a man chopping up a chorizo on the barbeque by local artist Jaz, and for a piece by famed British street artist Ben Eine.
More Info
Open In Google Maps
Caminito, La Boca Buenos Aires, Argentina

Art Gallery
Add to Plan
The area around Usina del Arte was home to the inaugural ColorBA Festival in 2016, and not only are the blocks surrounding this world-class institution covered in murals, but there are also lots of small galleries that can be visited in La Boca’s Arts District. Make sure to check the calendar for the Usina itself in case there is anything you want to check out.
More Info
Open In Google Maps
Avenida Don Pedro de Mendoza, Buenos Aires, Argentina
+541149092076
Visit website

Villa Crespo is home to a studio shared by three of the city’s most renowned street artists, so there are lots of smaller walls to seek out in this area. Head for the streets around the junction of Castillo and Serrano and not only will you be able to explore this wonderful neighbourhood, but also see some stunning artwork along the way.

Market
Add to Plan
This flea market on the border of Palermo and Colegiales is a veritable hotbed of great street art. A lot of it is left over from the first Meeting of Styles Festival, but there are newer artworks being added to it all the time. It’s just a few blocks from Plaza Matienzo, so you can check them both out at the same time.
More Info
Open In Google Maps
1650 Avenida Dorrego, Colegiales Buenos Aires, C1427, Argentina
+541147792915
Visit website 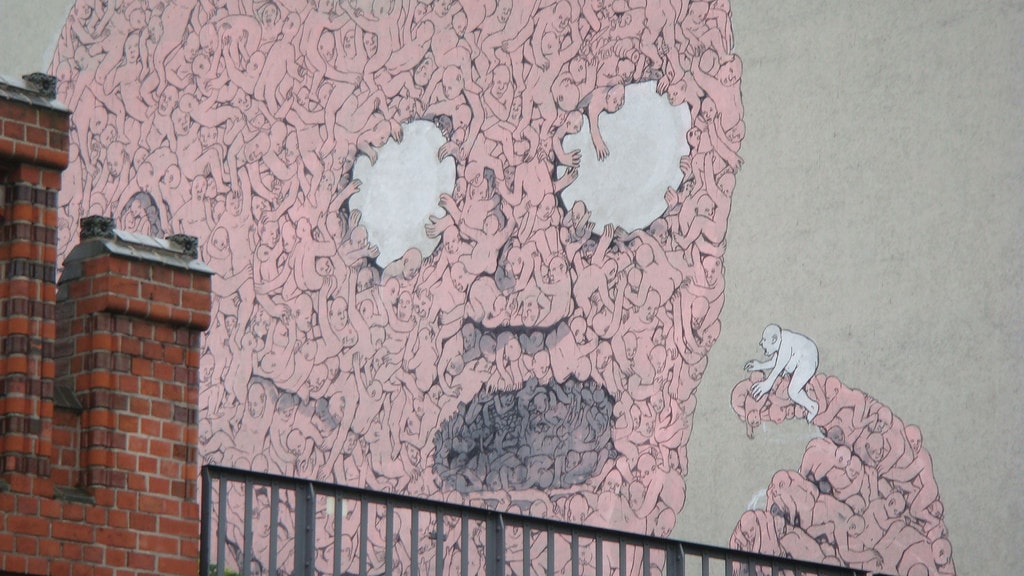 An artwork by Blu, who also has murals in Villa Urquiza | © RJ/Flickr

A little bit further to the north of the city you will find the neighbourhood of Villa Urquiza, a lesser-visited spot but well worth the trek. Here you can see huge murals by Italian legend Blu, as well as local star Martin Ron.