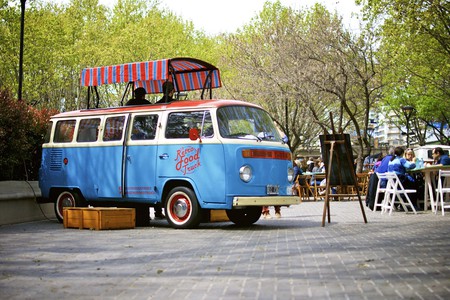 Food trucks have yet to arrive en masse in Buenos Aires, but the good news is, those that do exist are pretty darn good. So instead of being inundated with hordes of mediocre food trucks, the city’s got a chosen few (same goes for street food). Foodies are left to seek them out – which is where social media comes in. Here’s who to follow:

Technically more of a drink truck than a food truck, Fridaxelmundo Bar Sobre Ruedas (in English, Fridaxelmundo Bar On Wheels) spends its time serving up some mighty fine cocktails, so be sure to follow them on Facebook and/or Instagram. Check them out, winnebago style:

A post shared by Fridaxelmundo Bar sobre ruedas (@fridaxelmundo_barsobreruedas) on Mar 6, 2017 at 10:36am PST

Of course there’s a parilla on wheels in Buenos Aires! Only problem is that La Dorita, which offers traditional Argentine food – much of it meat hot off the grill – has grown so popular it’s become not one food truck, but four, often having to put out tables to handle capacity. Keep track of their movements here.

Moros En La Costa (“Moors on the coast”) is a food truck specializing in Arab cuisine. Follow them on Facebook here and Instagram here. Not to make you hungry or anything, but:

Bistro Food truck offers an array of traditional Argentine foods, many of them in the “comfort food” (or drunk food) category. A recent offering on their Facebook page was colchón de papas fritas redondas con un salteado de cebollas con jamón muzzarella y huevo which, translated literally, means a mattress of round fried potatoes with sauteed onions and ham, mozzarella and egg. If that has you curious, in a good way, follow them on Instagram.

If Argentina is known for one food, it’s their meat, which the CARNE (MEAT) truck proclaims loud and clear. Nor is the food truck any stranger to the hamburger craze that has hit Buenos Aires hard recently. If their Instagram photos are any indication, they’re serving up some downright mouth-watering burgers. The project of celebrated Argentine chef Mauro Colagreco, CARNE is hard to miss:

Considered one of the best cocktail bars in the city (famous bartender and all), the lovely florist-shop-turned-secret-bar Florería Atlántico also has a pop-up venue that hits the road on occasion. Keep tabs on it here:

The enormously popular (we’re talking nearly 8K likes on Facebook) Retro Food Truck has something for everyone – French crepes, pasta, the famous Argentine pork sandwich called bondiola (a must-try while in Buenos Aires, along with empanadas), and so forth. Follow them on Instagram here: