The 10 Most Impressive Buildings in Buenos Aires, Argentina 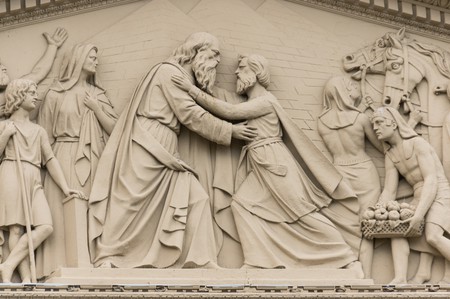 Buenos Aires, with its diversity of European-style architecture, has long been called ‘the Paris of South America’. It was a phrase thought up in the 1930s by a real estate marketing guru. The label still is in wide use today – even though the stately architecture is disappearing. Everyone who visits Buenos Aires has a favorite building or two, they just have to be searched out. ‘The Paris of South America’ still exists, it’s just harder to find these days. Here’s where to start looking. 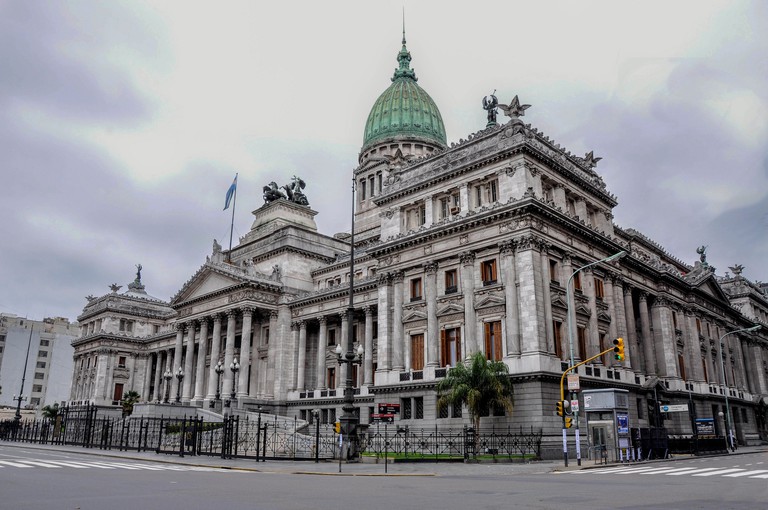 Argentine National Congress | © Jorge Láscar/Flickr
The place of Argentina’s parliament, the National Congress building, is situated at the end of Avenida de Mayo. Casa Rosada, the Presidential offices, are on the opposite end of the same avenue. The initial plans were sketched by Italian Architect Vittorio Meano and finished by Argentina’s architect Julio Dormal. Construction started in 1898 and was still only partially finished in 1906 when President Jose Figuero Alcorta inaugurated it. Tourists, as well as the general public, can get a guided tour around National Congress every weekday except Thursdays. The tour shows visitors the Chamber of Deputies, and the library noted for its walnut wood, hand-carved panels.
Open In Google Maps
1864 Avenida Rivadavia, Balvanera Buenos Aires, C1033, Argentina
+541141277100
Give us feedback 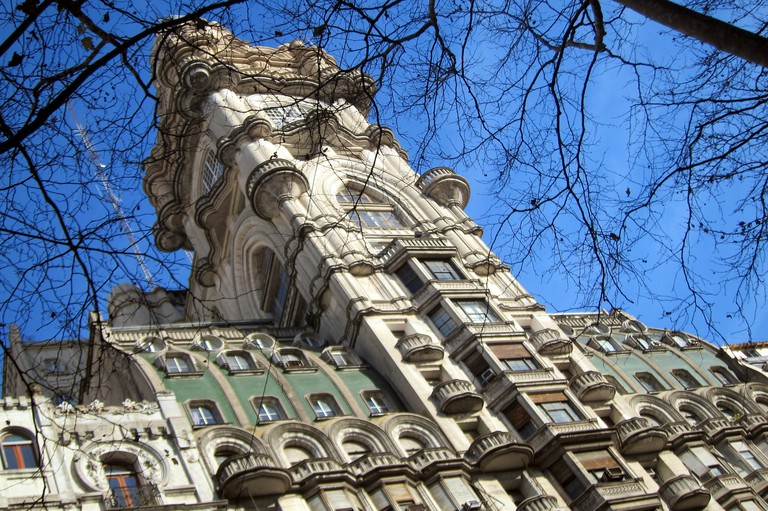 Monserrat: Palacio Barolo, Buenos Aires | © Wally Gobetz/Flickr
Used as offices by Argentina’s textile tycoon Luis Barolo, Palacio was the highest structure in South America until 1935. Barolo invited Mario Palanti to design the office tower in 1910, as he believed that Europe would cease to survive due to various wars going on. Palanti, a fan of Dante Alighieri, designed the building based on Dante’s work The Divine Comedy. The basement and ground floor represent Hell, while the first-to-15th storys stand for Purgatory, and the 16th through to the 22nd floors represent heaven. Both English and Spanish tours are provided and show how Dante’s work is factored into the building’s design. Today, Palacio Barola houses legal offices and was listed as a national historic monument in 1997.
Open In Google Maps
1370 Avenida de Mayo, Monserrat Buenos Aires, C1085, Argentina
+541132211331
Visit Website
Give us feedback 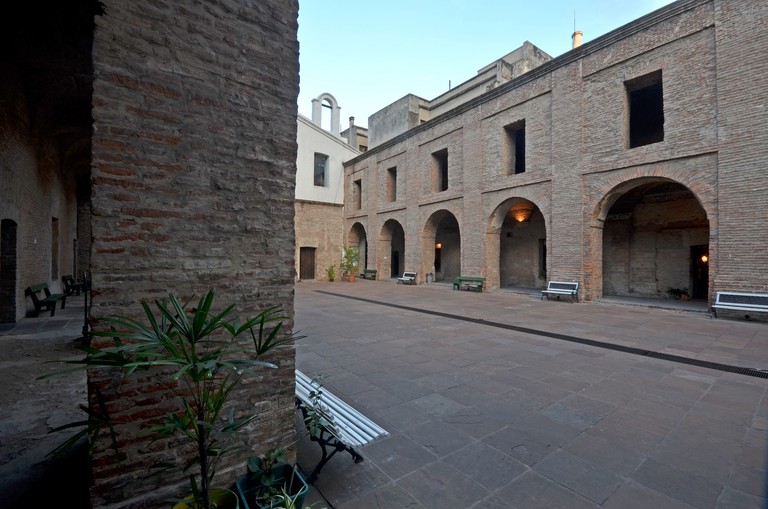 Complejo Histórico Cultural Manzana de las Luces, Buenos Aires | © Ministerio de Cultura de la Nación Argentina/Flickr
Also known as ‘The Block of Illumination’, La Manzana de Las Luces is located where an earlier Jesuit Church stood, and was the cerebral center of Buenos Aires during the 1600s and 1700s. San Ignacio church was built by the Jesuits on land conferred to them in 1616, and it is the earliest sanctuary in the city. The Jesuits were evicted in 1767 when the Spanish Crown viewed them as a threat. Eventually, Buenos Aires’ initial medical school was here, as well as the offices of the University of Buenos Aires. Historically, La Manzana de Las Luces was the center of political activism, and many students worked for Argentina’s independence. Tours are available on the weekends, and the highlight is a visit to the network of underground tunnels built by the Jesuits which connects the building to all major parts of the city. Remember, Spain viewed the mild, priestly order as a threat.
Open In Google Maps
294 Perú, AAF, Buenos Aires, C1067, Argentina
+541143429930
Visit Website
Give us feedback 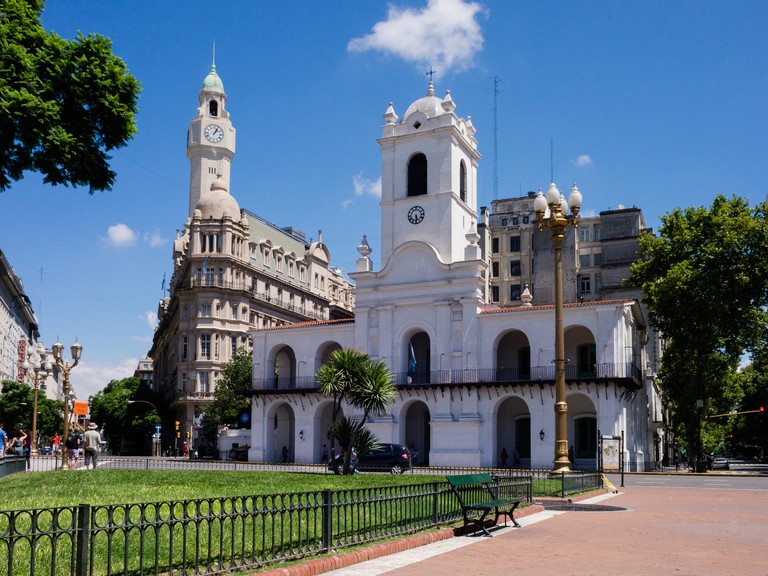 Cabildo de Buenos Aires | © nestor ferraro/Flickr
The building that contains the National Museum of the Cabildo and the May Revolution was once a home of the Spanish Viceroy. After a series of false starts spanning more than 150 years, construction was finally complete in 1764. The building was used as the city hall after Argentina proclaimed its independence from Spain. The Cabildo is one of the few colonial-era buildings still standing. However, the original columns and façades were removed to make room for two major avenidas. Exhibits in the museum include artifacts, weapons, documents, jewelry and more from the 1700s. A water well built in 1835 is an original feature of the building.
Open In Google Maps
Cabildo de Buenos Aires, 511 Avenida Hipólito Yrigoyen, AAG, Buenos Aires, C1086, Argentina
Give us feedback 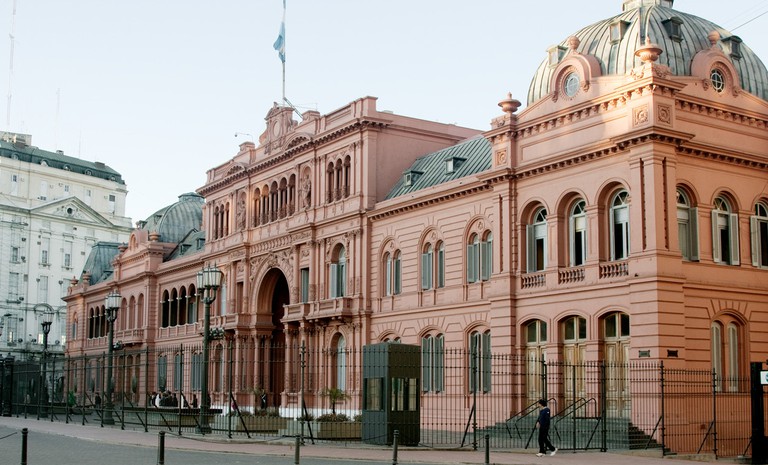 Casa Rosada, Buenos Aires | © Alessandro/Flickr
The Casa Rosada – or ‘Pink House’ – is across Plaza de Mayo from Cabildo. The old Customs House building now houses the offices of Argentina’s President. The Casa Rosada Museum includes an eclectic variety of exhibits which were owned by various Argentine leaders. Designed in 1957 to display presidential memorabilia, the collection includes remnants of the original fort that stood on the current site, as well as the Customs House. Also on display are books, furniture, swords and carriages used by former Presidents, in addition to flatware, dishes, and dolls. A section is set aside exclusively for Eva Perón. Admission is free, but advanced reservations are required. Open April–November, Monday–Sunday from 10AM–6PM; and December–March, Monday–Sunday from 11AM to 7PM.
Open In Google Maps
50 Balcarce, Monserrat Buenos Aires, C1064, Argentina
+541143443600
Visit Website
Give us feedback 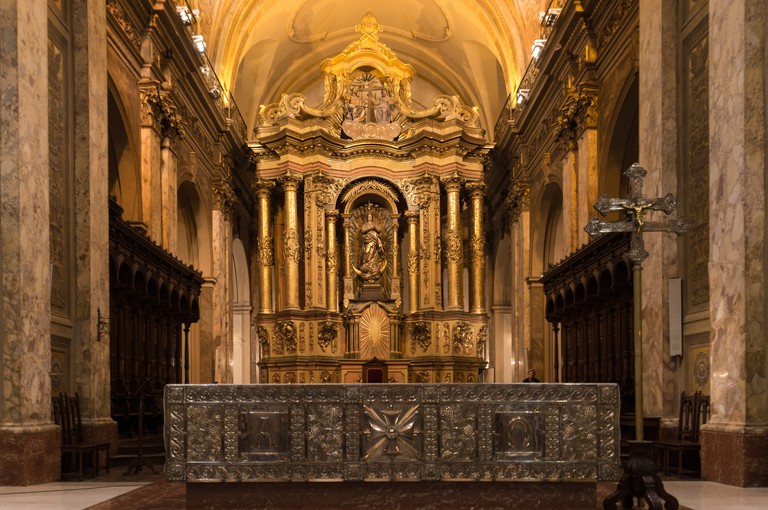 Interior of the Metropolitan Cathedral, Buenos Aires | © Niels Mickers/Flickr
The Cathedral is the principal Catholic Church in Buenos Aires and the home of the Archbishop. Built on land given by Buenos Aires’ founder, Juan de Garay, in 1580, the current incarnation is the latest in a string of buildings built and demolished over 150 years of Buenos Aires history. The current structure was finished, without a façade, in 1791. Features to see include an elaborate mausoleum with the body of General San Martín, the nation’s founder, and the country’s memorial to the Unknown Soldier. Two well-known soccer players, Daniel Bertoni and Hector Scotta, donated a statue of Christ carved from Lebanese cedar by sculptor Luis Alvarez Duarte. The former Archbishop, Jorge Mario Bergoglio, is now known to the world as Pope Francis.
Open In Google Maps
27 San Martín, San Nicolás Buenos Aires, C1004, Argentina
+541143312845
Visit Website
Give us feedback 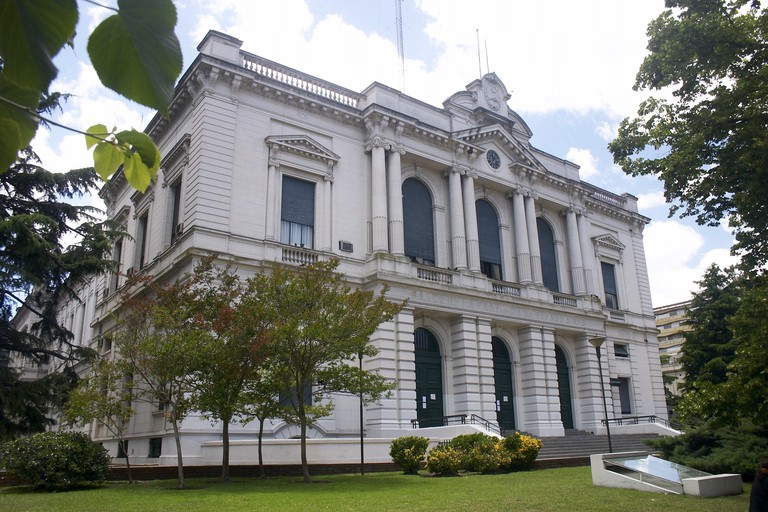 Casa Matriz del Banco de la Provincia de Buenos Aires, en La Plata, Argentina | © Barcex/Flickr
The Banco de la Provincia began in 1822 making it the oldest bank in Latin America. Over nearly 200 years it has held various names and legal statuses, but that has in no way made it less historically significant: it produced the first Argentinian banknote and in 1856 became the first bank in South America to issue a mortgage. The building – designed by architects Juan A. Buschiazzo and Luis A. Viglione – is now headquarters to more than 300 branches in Argentina and 20 further branches across South America and Europe.
Open In Google Maps
12802 Rivadavia, Ciudadela, Provincia de Buenos Aires, B1702, Argentina
+541146532595
Visit Website
Give us feedback 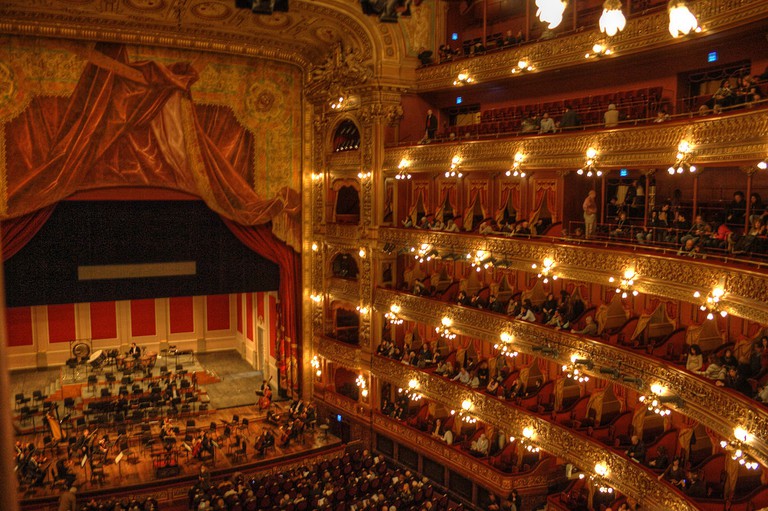 Concert hall and stage, Teatro Colón, Buenos Aires | © HalloweenHJB/WikiMedia
Also known as Columbus Theater, Teatro Colón it is often considered one of the exceptional opera theaters globally. Touring companies with flourishing operas resulted in the first Teatro Colón being built in 1857. After flourishing for 30 years, it became apparent that a new and bigger venue was required. Following 20 years of construction, the current Teatro Colón opened in 1908 with a performance of Giuseppe Verdi’s Aida.

Built with carefully chosen materials from Europe, the building is decorated with different Italian marbles, French stained glass, and Venice mosaics. The main hall can seat over 2,500 and with four galleries, 1,000 more can be accommodated. The tenor Luciano Pavarotti described the theater as one of the most challenging halls in the world since even the slightest mistakes can be detected.
Open In Google Maps
628 Cerrito, San Nicolás Buenos Aires, C1010, Argentina
+541143787100
Visit Website
Give us feedback 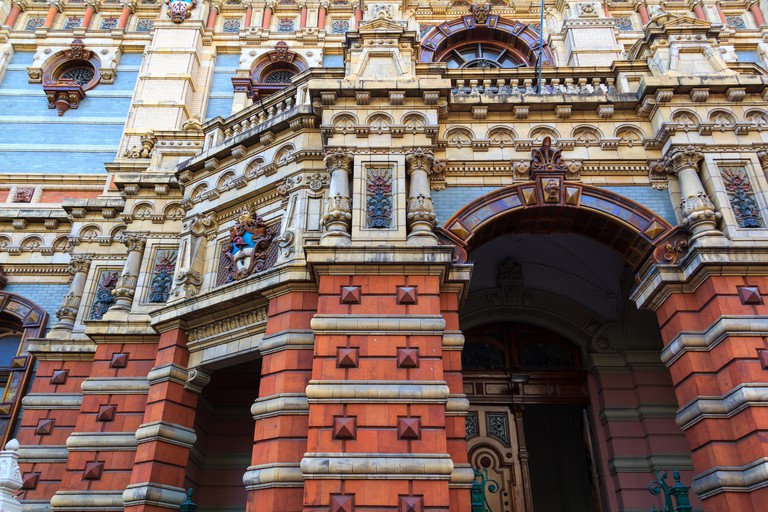 The Palacio de Aguas Argentinas – or Water Palace – unique and ornate, once functioned as the city’s water supplier. The Palacio was developed following a yellow fever epidemic which killed a significant portion of its residents in 1871. The ornate exterior gives the appearance of a royal residence, but hidden behind are the pipes, tanks, and pumps which made the reservoir work. The interior components came from Belgium and consisted of 12 water tanks which held 19 million gallons of water. Today, the building is home to the offices of the city’s new water department, as well as a museum dedicated to drainage and sanitation. Yes, there is a collection of commodes, bidets, and related objects. 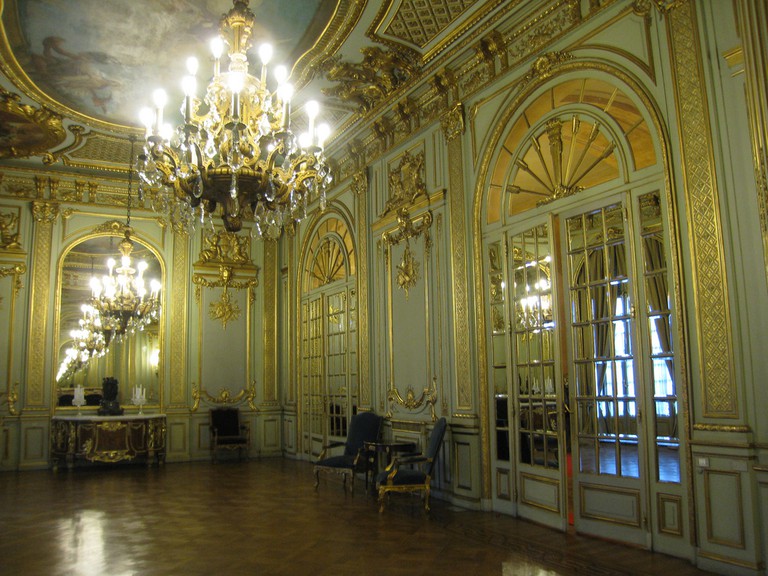 The grand interior of the Palacio San Martin, Buenos Aires | © AHLN/Flickr
This is the formal base of Argentina’s Foreign Ministry and was built as the residence for the affluent Anchorena family. Constructed between 1905 and 1909, the government acquired the structure in 1936. In 1993, the Foreign Ministry Headquarters was moved, and the ornate structure serves as its ceremonial headquarters. As originally built, the building is a complex of three residences surrounding a common patio. In addition to housing famous works by Argentine artists, exhibits also show pre-Columbian art in pottery, stone, and metal. The Palacio has a library with books in Spanish and other languages on international law and relations.

The sign on the front door says, ‘Los tours se llevan a cabo alrededor del edificio en la mayoría de los martes y miércoles.’ Translated it means, ‘Tours are conducted around the building on most Tuesdays and Wednesdays.’ The flexibility in Palacio San Martin’s hours reflects the laid back attitude of most Argentine bureaucracies.
Open In Google Maps
761 Arenales, AAA, Buenos Aires, C1061, Argentina
+541148197297
Visit Website
Give us feedback
Give us feedback