Meet the Graveyard Cats Guarding a Cemetery in Buenos Aires 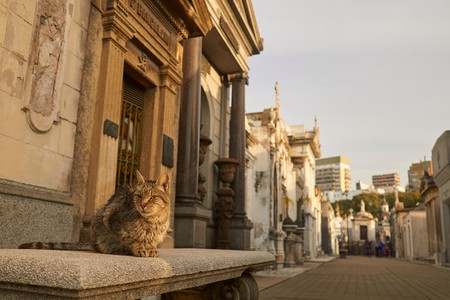 La Recoleta Cemetery is praised for its architecture and its resemblance to a “miniature city”, as the great Argentine writer Ezequiel Martínez Estrada once described it. But along its corridors (often flooded with tourists searching for historical last names on the many plaques) roam the true citizens of the cemetery: dozens of cats relentlessly resting upon statues and benches.

Founded in 1822, La Recoleta Cemetery is the final resting place for some of the most affluent and patrician families of Argentina. Somber mausoleums are adorned with statues – some corroded by time and weather – chiselled doors and plaques with the lamenting words of loved ones. Many of the Argentine presidents are buried among the more than 4,500 graves. But as many visitors have pointed out, it is not only the deceased who call this place home. About 75 cats reside in the cemetery along these “gorgeous monuments of marble,” as explorer Thomas Hutchinson once proclaimed. 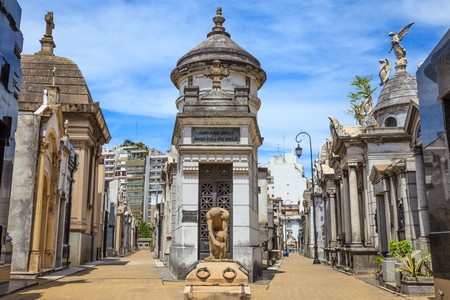 The sight of so many cats often surprises visitors, who eagerly take pictures of the feline models that inadvertently pose for them. Every morning before most people arrive, and every afternoon just before the cemetery closes, a group of volunteers take care of the cats. They feed them, ensure they are spayed or neutered and keep an eye on their health. 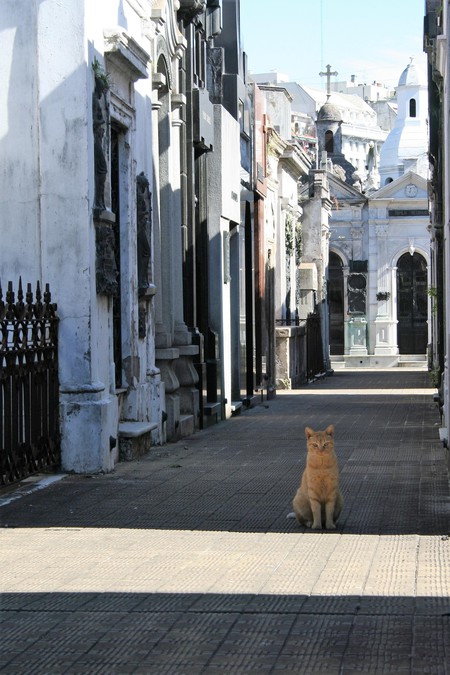 All of these volunteers are coordinated by a woman, known only as “The Lady”, who wishes to remain anonymous since she claims to be “a well-known person”. For more than 20 years she has taken care of the cats, preparing food for them and paying for every expense related to their well-being. The cats are treated with anti-flea medication monthly and closely monitored. A few years ago, when asked about why she devotes her life to the guardians of Recoleta, The Lady had a very simple answer: “For the love of the cats.”

The cats’ story is the subject of Guardians of Recoleta, a documentary by Blake and Adrienne Kuhre, an American couple who run a nonprofit cat rescue organization in Los Angeles. The film examines both the story of the cats living in the cemetery and the people who take care of them, and came about after interacting with the cats during a visit to Buenos Aires almost a decade ago.

The couple visited the cemetery expecting to see the graves of the many Argentine heroes. Instead of becoming enchanted by the majestic mausoleums, it was the living population that struck them: the true guardians of Recoleta. What caught the Kuhres’s attention was the cats’ great health — someone had to be taking care of them. But before giving it too much thought, they went on with their day and their lives. 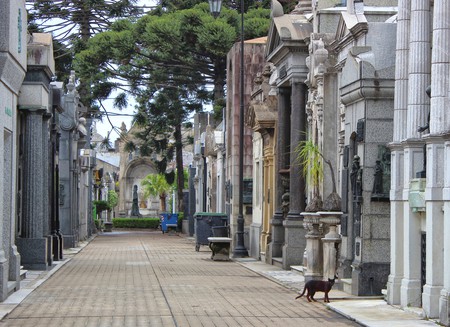 The cats roam around the 4,691 above-ground vaults, of which 94 have been declared National Historical Monuments by the Argentine government and are protected by the state | © larigan - Patricia Hamilton / Getty Images

After a friend of theirs went back to Buenos Aires to visit family, the couple asked him to take some pictures of the cats at the cemetery. Looking once again at the cats that they had met years before, they determined they had to go back to learn the true story of the cats of Recoleta. After a few days of wandering the cemetery looking for an answer, they came across The Lady, who invited them to her apartment and told them the story of how she was going bankrupt taking care of the cats and was starting to worry about her own remaining time.

That’s how the idea of the documentary took shape. The Kuhres went on Kickstarter and successfully surpassed their target of raising $15,000 USD, donating 50% of the amount pledged above their goal to a volunteer group that takes care of cats in the Botanical Garden of Buenos Aires. Two years later, the documentary was screened for backers and, in 2016, it was even screened during the first NY Cat Film Festival!