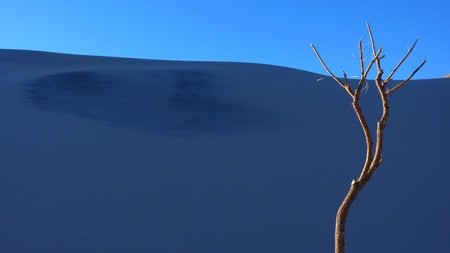 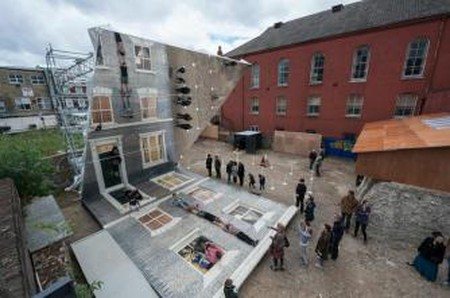 Seemingly overnight, a vacant lot on London’s Ashwin Street transformed into a sober Victorian facade, reminiscent of the terraced properties that used to lay there years ago but inverted, and reflected onto a massive mirror — leaving visitors even more perplexed as playful kids scaled its walls and acrobats performed treacherous tricks. Beyond Barbican’s Dalston House displays only one facet of Leandro Elrich’s whimsical, illusory genius, and has London’s big and little kids hooked on art. In the past, Elrich has let visitors wander under the flickering waters of his trompe l’oeil Swimming Pool, without getting wet, while in La Torre (now part of Madrid’s Reina Sofia Museum collection) he provided them with an equally baffling, vertiginous ambiance. Elrich’s work challenges the critical mind, by shattering our so far calculated, unadventurous routine, while satirizing the faux elitist status of colonialism and the bourgeoisie. In his hands, optical illusion becomes a tangible three-dimensional reality, where art (and playground) aficionados actively take part. 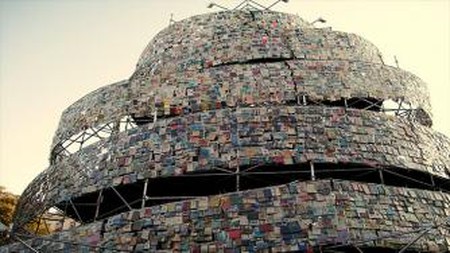 Often dubbed the Argentinian Andy Warhol, Minujín (b. 1943) is a Pop Art queen and female provocateur in her own right. Adopting a bold, larger-than-life public persona that paved the way for the likes of Lady Gaga, she has been constantly reinventing herself for the last half century. Taking art out of museums and injecting it with new elaborate dynamics, she created a series of installation-based happenings, like the Minuphone where, by entering a phone-booth and dialing a number, one triggered a series of sounds and colorful displays on the glass panel. She recreated Venus de Milo in cheese and the Buenos Aires Obelisk in pan dulce. Aptly named The Debt (1985), her much-publicised collaboration with Warhol, a couple of years before his death, was inspired by the Argentine debt crisis. More recently, the Tower of Babel, a 7-storey-high multilingual library composed by 30,000 books, marked Buenos Aires’s crowning as 2011 World Book Capital. An eloquent proof, if anything, of Minujín’s immeasurable creative imagination. 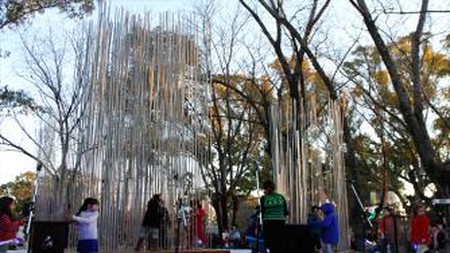 When dealing with León Ferrari’s (b. 1920) autodidactic work, it wouldn’t be unlikely to find Virgin Mary in a blender and Jesus balancing himself on a cheese grater, or crucified on a US fighter plane, like the one in La Civilización Occidental y Cristiana (Western-Christian Civilization, 1965) in an improbable protest against the Vietnam War. Christianity and power often alternate in the background of his thought-provoking, shock-inducing artworks, made out of cement, ceramics, wood, poetry or newspaper clippings. It was the artist’s bold takes on state repression that forced him to relocate to Brazil during the last Argentine dictatorship. Ferrari was The Golden Lion winner in the 2007 Venice Biennale, while other awards include Argentina’s 2012 Diamond Konex Award for Visual Arts which proclaimed him the most important artist in the last decade. 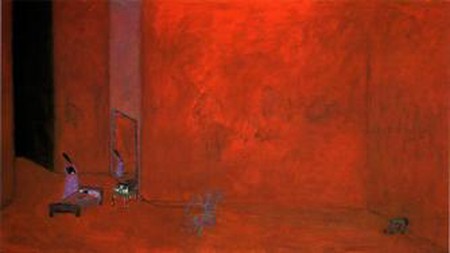 From abstract expressionism to road maps, Kuitca (b. 1961) has been masterfully unveiling elusive political and psychological tensions on his widely acclaimed canvases. Austere architectonic blueprints, seating charts and baggage-claim carousels evoke themes of migration and disappearance, precariously balancing between the private, the public and the domestic. German choreographer extraordinaire Pina Bausch, and avant-garde theatre in its whole have been major influences, along with Denis Diderot’s philosophical writings (namely in his 2002 work L’Encyclopédie), literature and popular music. His famous maps provide the viewer with poetic accounts of memory and loss; creating a sense of displacement rather than direction. A series of collages and manipulated digital prints only intensify this idea of abstraction and the artist’s own personal enigma. Kuitca’s work can be found in such prestigious collections, as London’s Tate Gallery and New York’s Metropolitan Museum of Art, confirming his international star status. 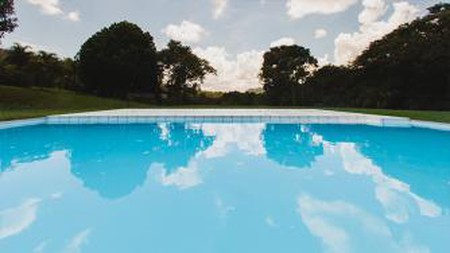 Jorge Macchi (b. 1963) attempts to bring to focus and expose the banal and, through a twisted standpoint and crossover associations, give it dimension and substance. Synchronized light and sound are vital to his work, as are the recurring themes of time and space. Disruption and destruction between objects form unexpected patterns and become subject to reflexion. In 2004’s Buenos Aires Tour he created an alternate tourist guide, with 8 itineraries based on the lines made by a broken glass on the map of the city, in a collaborative effort with Edgardo Rudnitzky (sounds) and Maria Negroni (texts). 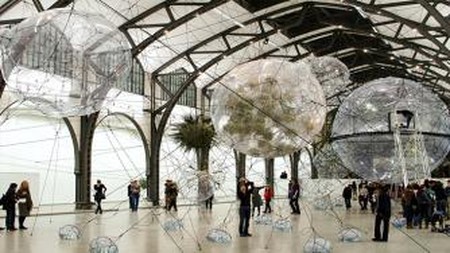 Gigantic spider webs, plastic soap bubbles and dreamy cloud formations all become tools in the hands of Tomás Saraceno, an artist dedicated to spawning alternate realities and reinventing our relationship with the surrounding nature. Through his participatory installations, he promotes unlikely forms of communication, a weightlessness and a universality that gives people the chance to mold with their presence. In 2012, he treated New Yorkers with exquisite strolls around Cloud City (part of the eponymous ongoing series), a constellation of large, interconnected modules in non-linear configurations that utterly revamped the Metropolitan Museum of Art’s roof garden. Trained as an architect, he developed his most monumental installation to date in collaboration with engineers, architects, and arachnologists, magnificently interweaving lightness and functionality, beauty and strength. 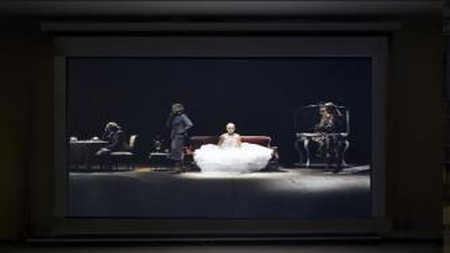 Representing the Argentina Pavilion at the 55th Venice Biennale, Constantino set aside her notoriously bizarre, controversial subjects in favour of a multi-layered artistic tribute to the country’s most prominent political female figure, Eva Perón. It hasn’t always, though, been the case. The artist’s multimedia body of work includes, among others, Savon de Corps (Body Soap), where she used three percent of fat from a liposuction on her own body, and the disturbingly catchy motto “Take a Bath with Me.” Her famously graphic Male Nipples Corset caught the eye of New York’s MoMA, which included it in its collection. Constantino’s haute couture knowledge and experience alongside her mother first found a creative outlet in dresses and lavish coats made out of silicon human skin and human hair necks — fashion explorations that gradually evolved into Peletería Humana (Human Furriery), a window display with twenty mannequins dressed in her designs. They were of the finest quality, but they would hardly dress the likes of Eva Perón. 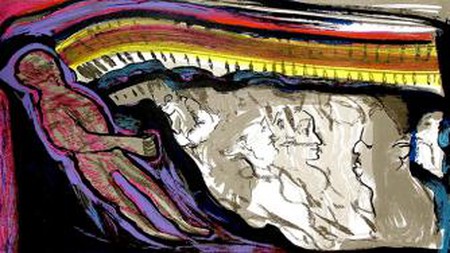 A major influential figure in Argentinian art since the ‘60s, Noé (b. 1933), a painter, writer and all-around intellectual, has a long and turbulent career that goes hand-in-hand with the country’s socio-political instability and upheaval. Actively believing in “chaos as a value,” he pioneered the movement of Otra Figuración with three other Argentine artists, indulging in spontaneous, anarchic, politically-loaded expressionist paintings and drawings — a violent and colourful reflection of the country’s political state at the time. A Guggenheim fellowship later brought him to New York, where he continued to drive his art to bigger extremes, also publishing his theories on chaos in Antiestética (1965). Though Noé always found his way back to his native Buenos Aires, other instrumental events in the country’s history, like 1976’s coup d’etat, drove him to exile in Paris for over a decade. Apart from a series of solo and group exhibitions, his contribution to the Argentine art scene was finally awarded, in 2002, the Diamond Konex Award for Visual Arts as the decade’s most important artist. 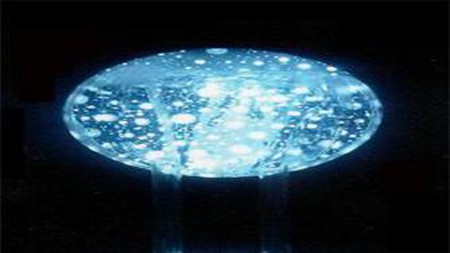 Slovakian-born Kosice (originally Fernando Fallik, b. 1924) moved to Argentina at a young age, where he began producing a revolutionary body of work focused on kinetic and luminal art — sophisticated and aesthetically stunning hydrowalls, hydrospatial tours and luminous reliefs, among the rest. He was the first, on an international level, to embody water and neon gas in his monumental sculptures and objects, and he is largely considered one of the forerunners of Latin American abstract and non-figurative art. In 1946 he initiated the international Madí Art Movement (or MADI), that embraced everything from pictorial arts to literature and dance, giving a playful spin on the physical realities of each medium (namely using irregularly-shaped canvases). The artist counts dozens of solo, and hundreds of group exhibitions in Europe and the Americas — and Madí, like Kosice himself, still remains active today. In fact, the public can get a taste of his parallel luminous, hydrokinetic universe by joining a tour in his free workshop-museum, where everyday reality, art and life are, in the artist’s words “in constant flow.” 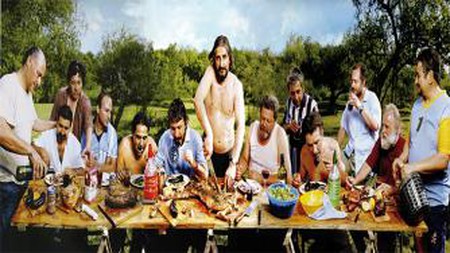 Marcos López’s decidedly theatrical photographic exposures offer surprisingly honest glimpses on Argentinian life. His bright, saturated kitsch hides behind its artificiality pained, haunting moments of the Latin American quotidian — and the artist himself. Citing writer Gabriel Garcia Marquez (one of his teachers at International Film and Television School of San Antonio de los Banos, Cuba) and painter Diego Rivera among his broad scope of influences, he developed a now instantly recognisable, sinister style of political photography, where his views on his country’s misfortunes and unrest (namely under the presidency of Carlos Menem during the nineties) carefully hide behind digitally retouched smiles. In his book Pop Latino (part of which is also the series Buenos Aires, The City of Joy) he portrayed everything from local taxi drivers to the criollo carnival — but nothing compares to the iconic Asado en Mendiolaza, Lopez’s unorthodox, decadent Pop masterpiece, reminiscent of Da Vinci’s The Last Supper.