How the Cartoneros in Buenos Aires Champion Urban Recycling 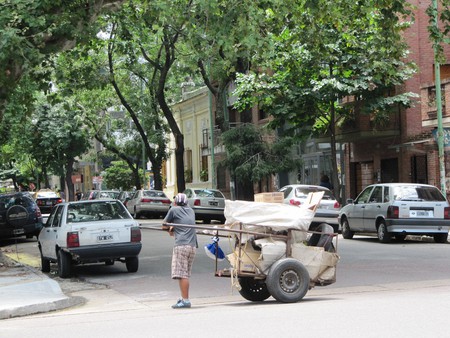 The city of Buenos Aires has been working towards “zero garbage” for more than a decade. But despite the government’s efforts, it’s the cartoneros (litter-pickers) in Buenos Aires who champion urban recycling and have kickstarted it into becoming a basic part of daily life.

Cartoneros are people who roam the streets, sorting through trash to collect recyclables. Derived from the word cartón (Spanish for “cardboard”), the name alludes to those who gather cardboard and other recyclable material. The media coined this term after the 2001 economic crisis  that left over 50% of Argentinians living below the poverty line and as much as 25% living as indigents. Collecting recyclables provides guaranteed income in the absence of other employment opportunities brought on by the crisis. Cartoneros bring the paper, cardboard, plastic and metals to processing plants in exchange for money.

Though the press invented the term, the cartoneros themselves reclaimed the word as a badge of self-identification. Like the sidewalk booksellers of New York City, these people live outside the system and make the most of the discarded scraps while simultaneously benefiting society – and they proudly claim their identity as such. 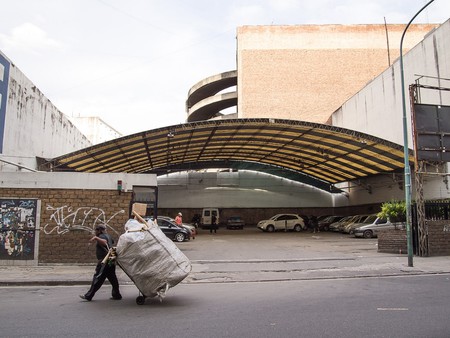 In Buenos Aires, cartoneros are vital for getting recyclables to the processing plants | © Dan DeLuca / Flickr

Cartoneros have become a crucial part of Buenos Aires’ waste-management efforts. Also known as urban recyclers, the cartoneros have now formed 12 cooperatives of more than 5,300 people who collect recyclable materials. Every day, they pick from special containers and bring the separated materials to the 15 city-sponsored processing plants. These recycling hubs offer cleaner and safer working conditions than the plants of yesteryear, and allow the cartoneros to negotiate better prices with the recycling companies.

These more organized efforts are largely thanks to the Zero Garbage law that the Argentinian government enforced in 2005, that aims to gradually reduce the waste going to landfills. In Buenos Aires, 6,760 tons of garbage are produced daily, of which as much as 66% is recycled. A system of 26,700 containers is distributed across the city, that are emptied every day by six different companies that provide garbage truck services. Garbage is managed in this way, but when it comes to recycling, the key components are separation of waste at home and the daily work of the cartoneros, Buenos Aires’ urban recycling champions. 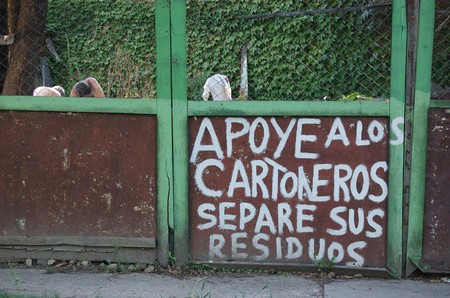 But even though the Zero Garbage law is slowly improving waste management in the city, there’s still work left to do. For example, as some cartonero collectives point out, at least 15,000 people in Buenos Aires depend on litter-picking for their livelihood, which means that only a third of them collects a subsidy – namely, those that belong to a cooperative.

Waste-management, as it is often pointed out, has a great deal to do with education. It’s crucial that people separate recyclables at the source and put them into the special lime-green recycling bins, to assist cartoneros and the city’s waste-disposal efforts. But most of these bins are only located in the wealthiest neighborhoods, such as Palermo or Recoleta, and are often outnumbered by regular non-recycling bins. 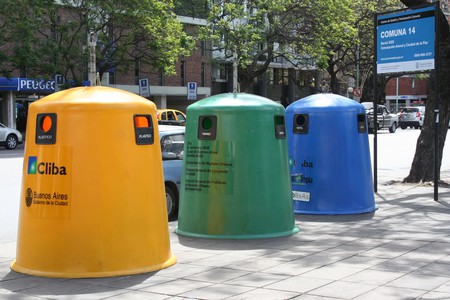 Garbage is by no means a problem exclusive to any one place in the world. In fact, it amounts to a global crisis that is expected to worsen exponentially in the next few decades as more people move to the cities and produce more and more waste. The World Bank estimates that by 2025, the waste produced globally will be enough to fill a line of rubbish trucks 3,100 miles long every day.

Responsibility when it comes to garbage is shared by the government, the recycling cooperatives and companies, and the general population. But in the race against drowning in garbage that the whole planet is facing, awareness of why and how to recycle remains a crucial factor. This is why the daily work of the cartoneros of Buenos Aires, once frowned upon, is being recognized as a public service that pushes the city into the Zero Waste future it envisions.