How Bariloche Became the Chocolate Capital of Argentina 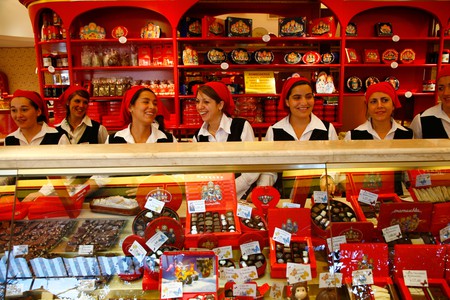 Mamuschka is one of the well-known chocolate shops in Bariloche | © Y. Levy / Alamy Stock Photo

Bariloche is not only known for its mountain landscapes and broad diversity of natural wonders but also for its chocolate.

More than half a million people migrated from Europe to Argentina between 1947 and 1952, following World War II. It was the last significant European immigration period. In Patagonia, some provinces such as Río Negro and Neuquén doubled in population, which was especially evident in the large town of Bariloche. Among the newcomers, many Italians were escaping the devastating aftermath of the war. But luckily, many of them preserved their cultures and brought their recipes with them. During the area’s cold winters, some of these European immigrants saw the opportunity to foster a culture of chocolate in their newfound home, which in turn led to the popularity of Argentinian chocolate. 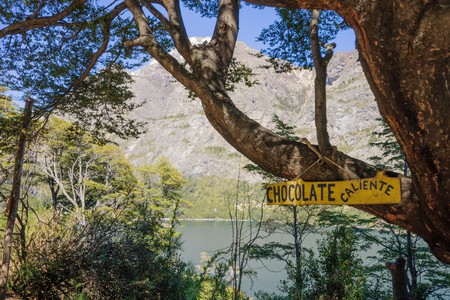 Surrounded by beautiful landscapes and a privileged location just a few hours from the border with Chile, Bariloche went from being an agricultural colony to a tourist destination in just a few decades. This was largely thanks to the arrival of the Southern railroad that connected Bariloche with Buenos Aires, and the creation of the National Parks system in 1934, which transformed Bariloche and its surrounding area into the Nahuel Huapi National Park. With a strong political commitment towards improving the town’s infrastructure, Bariloche was slowly upgraded with world-class hotels, roads, travel agencies, shops and all sorts of institutions largely mounted around natural attractions. After gaining a reputation of being similar to a traditional European alpine town, earning it the moniker of ‘Little Switzerland’, many European expatriates left for the small Patagonian town that reminded them of familiar landscapes.

The chocolatier named Aldo Fenoglio arrived in Bariloche in 1947, looking for a place with dry weather so he could work with his sweet treat. Fenoglio was from Turin, Italy, the chocolate heart of Europe since the 17th century, where he had a chocolate store before the war. And he was looking to repeat his previous success in his new town.

Fenoglio is credited with inventing a type of artisanal chocolate bar and the famous chocolate ‘branches’ – folded chocolate sheets resembling tree bark. The story goes that one day he forgot a pot full of molten chocolate over a nut grinder, a contraption that consisted of two stone rollers side by side. Eventually the chocolate fell and poured in a pile over the machine. To clean the mess he turned on the grinder, resulting in fine layers of chocolate that folded as they descended. They looked so good that he decided to turn that into what has become one of Bariloche’s best known chocolate delicacies: chocolate en rama, which looks like the bark of a tree. 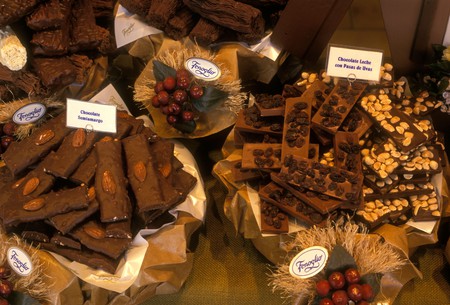 Though Bariloche experienced some unfortunate gentrification at the time, attracting wealthy Argentines and Europeans and thereby pushing out low-income and indigenous residents, the town recovered its diverse population and visitors. In 1945, President Perón steered the area toward social tourism by providing economic opportunities via travel and tourism for people with low income or otherwise disadvantaged. Because of this, the number of visitors tripled in just five years. In the ’60s and ’70s, with the rapid growth of Bariloche as a family-favorite winter holiday destination, wooden crafts, sweaters and chocolate became the main products of its economy. Nowadays, only chocolate has persisted as a key element of its identity.

Most of the chocolate factories in Bariloche were founded by either relatives of the Fenoglio family (such as Del Turista, founded by Fenoglio’s brother-in-law, or Rapa Nui, founded by one of his sons and known for their Fra-Nui chocolate-covered raspberries), or former employees (such as Benroth or Frantom, among others). But there are also other well-established chocolate factories such as Mamuschka, founded 30 years ago, or VanWynsberghe Chocolates, known for their Belgian style.

Disputes regarding who founded the first chocolate factory in Bariloche or even who invented which treat continue to this day. It’s all part of the chocolate folklore of Bariloche. 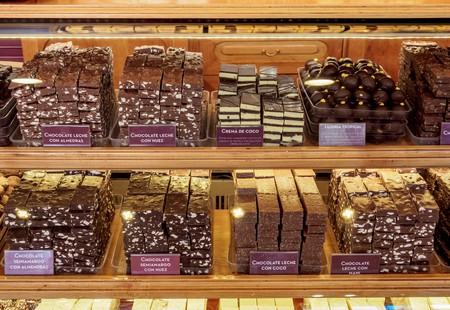