15 Incredible Places to Sleep Under the Stars in South America

South America is ideally suited to stargazing, offering some of the world’s most beautiful constellations in a crystal-clear night sky. Whether you’re backpacking in Bolivia or traveling in Chile, here are some of the best spots to rest your head under the heavens.

Home to the largest astronomical project on Earth, Chile’a Atacama Desert draws legions of astro-tourists every year. Renowned worldwide for its incredible starscapes, Atacama separates the Andes from the Pacific by way of an immense desert plateau. Visitors generally stay in the town of San Pedro de Atacama, which has a nice little Meteorite Museum, and either take an astronomically-oriented tour or join the weekend public tours offered at the multi-nation astronomical Project ALMA (advance sign-up is required, reserve here). From ALMA’s visitor’s center, located at 2,900 meters, you get beautiful views of the desert and Valley of the Moon. 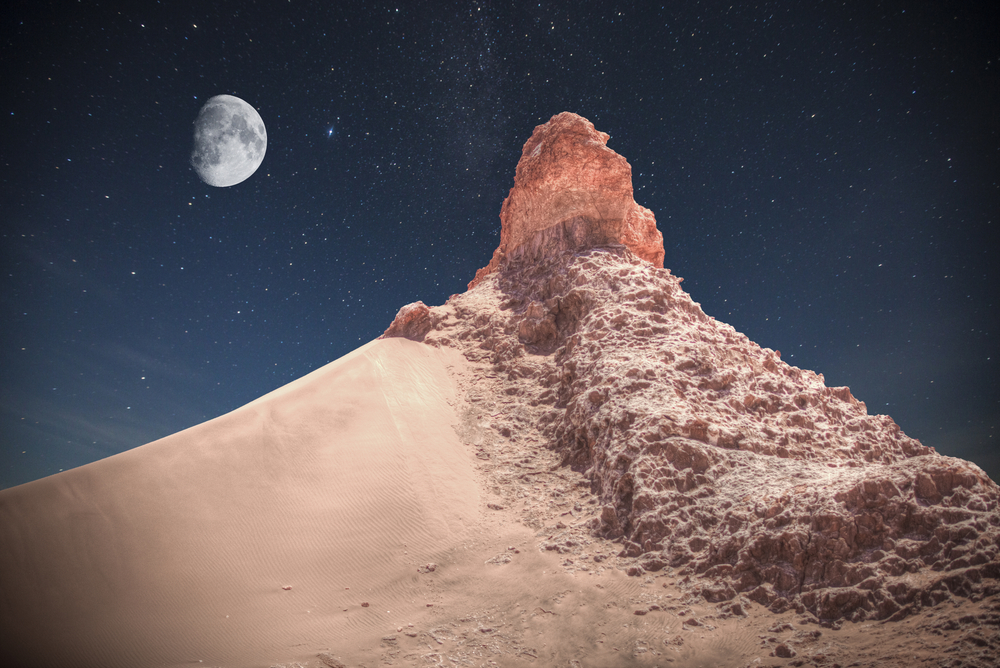 One way to escape city lights is to burrow your way into a tropical rainforest and float along the Amazon river looking up at the stars. Now’s the time to go, with the Brazilian rainforest newly under threat by the mining and agricultural sector. Rainforest adventures are provided by numerous tour providers – check out Sumak Travel or Rainforest Expeditions, for starters. 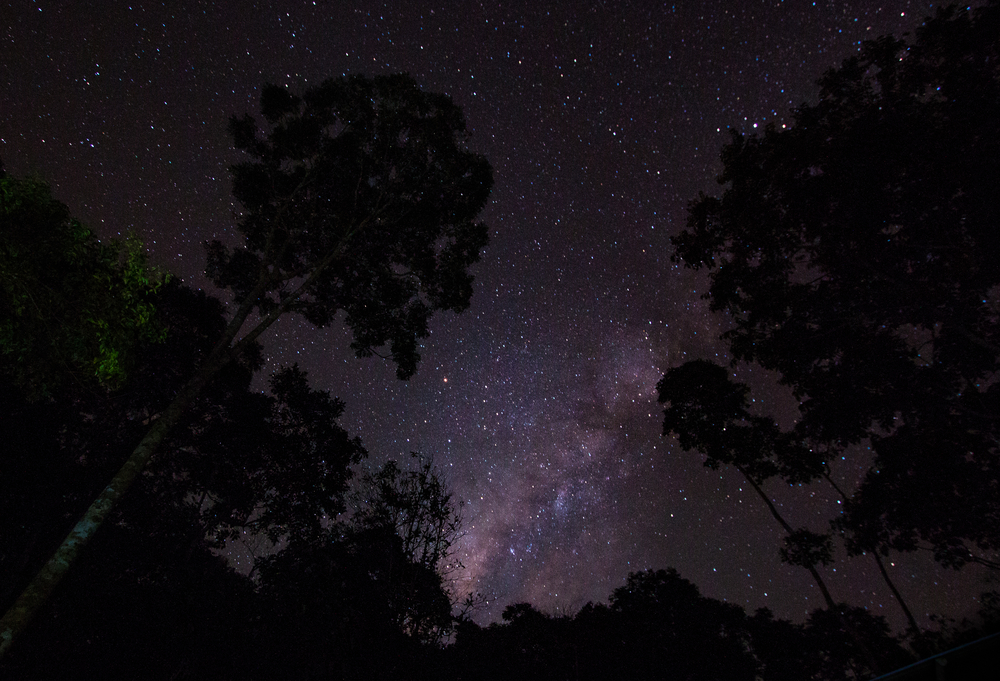 Chile’s Elqui Domos hotel is a particularly astronomically-oriented affair, offering dome stays (which have retractable roofs for open-air sleeping) and ‘observatory bedrooms’ especially designed for viewing the night sky. Oh, and did we mention it has its own on-site observatory? It does indeed, completely with fancy Schmidt-Cassegrain telescopes. The hotel, opened after remodeling in 2017, also offers astronomical tours and tarot readings. 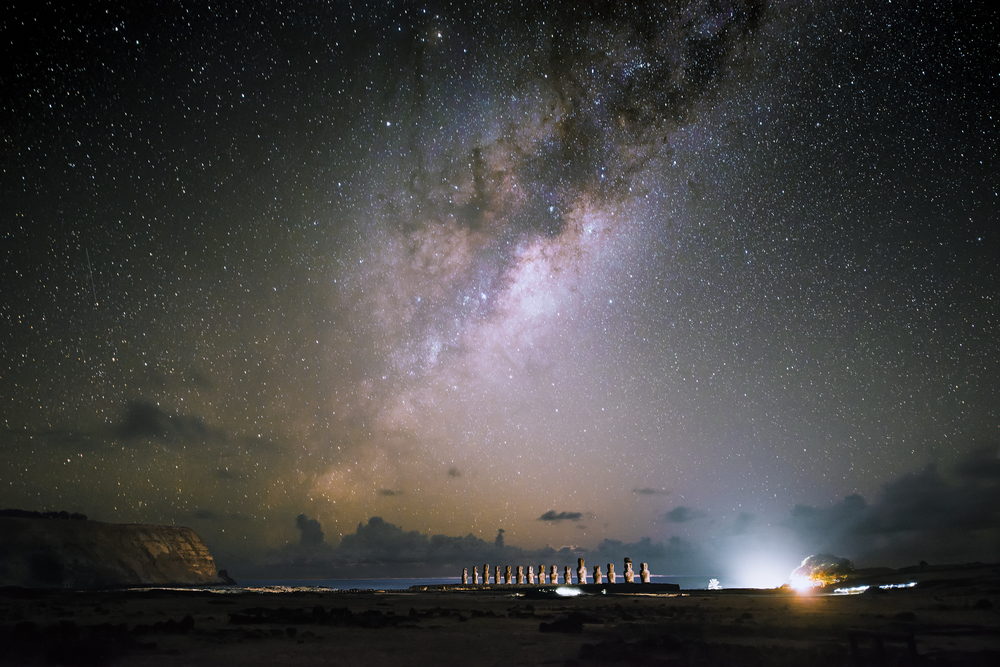 
You can literally camp out next to an observatory in Colombia, ensuring you a pretty stellar night sky. The Observatorio Astronómico de la Tatacoa, located just outside Villavieja, gives you not only incredible night vistas but also crazy-beautiful desert landscapes. More information here (you’ll have to GoogleTranslate). 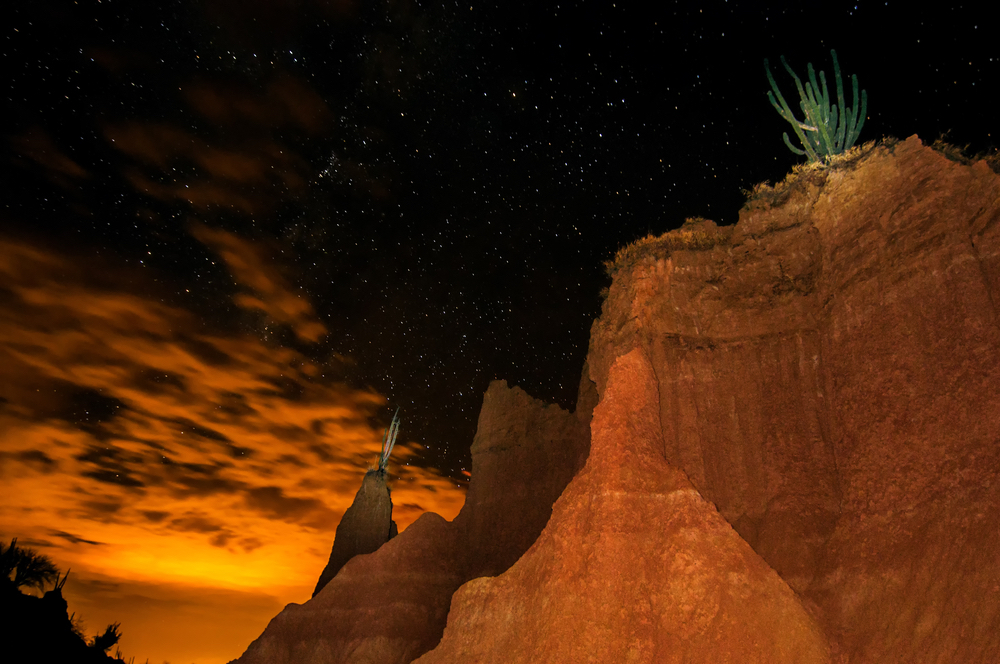 Climbing to the top of Chimborazo will get you as close as is humanely possible to the stars, being the highest point on earth in respect to the center of the planet. As the Earth is not perfectly round, the Equator is actually closer to space than the rest of the planet – seen from this perspective, Chimborazo is closer to the heavens than Kilimanjaro or even Everest. As The Guardian puts it in this must-read piece for those thinking about taking on the challenge:

The world’s most remote inhabited island offers unimpeded views of the Milky Way, and its brilliance against a night sky free of artificial light will take your breath away. If you’re lucky, your only company will be the island’s famous stone Moai statues, who have been gazing at stars from the heavens for aeons. Visitor information here.

How about taking in the night sky from pods glued to the side of a mountain in Peru’s Sacred Valley? This intriguing concept has just one catch: you have to climb 1,000 feet up to reach the hanging translucent lodgings. Located en route to Macchu Picchu, Skylodge’s Adventure Suites draw adventure tourists year-round. The two-day, one-night trip is provided through Natura Vive – here’s a video:

There are three types of camping you can do in Argentina: municipal (provided by the local government, offering basic amenities at a low price), privado (private, pricier, often with extremely nice facilities, including hot showers and all the necessaries for asado barbecues), and libre (this basically means you can camp wherever you want, including national parks, as long as it’s not private property). So, where to camp? The best place to start off in is the small, nature-loving town of El Bolsón in Patagonia. Ringed by famous Andean mountain peaks, it’s ideal for sky-gazing. The easily-accessed mountain paths offer municipal camping as well as small huts called refugios in case you get caught in bad weather. Click here for a guide to trekking the area. 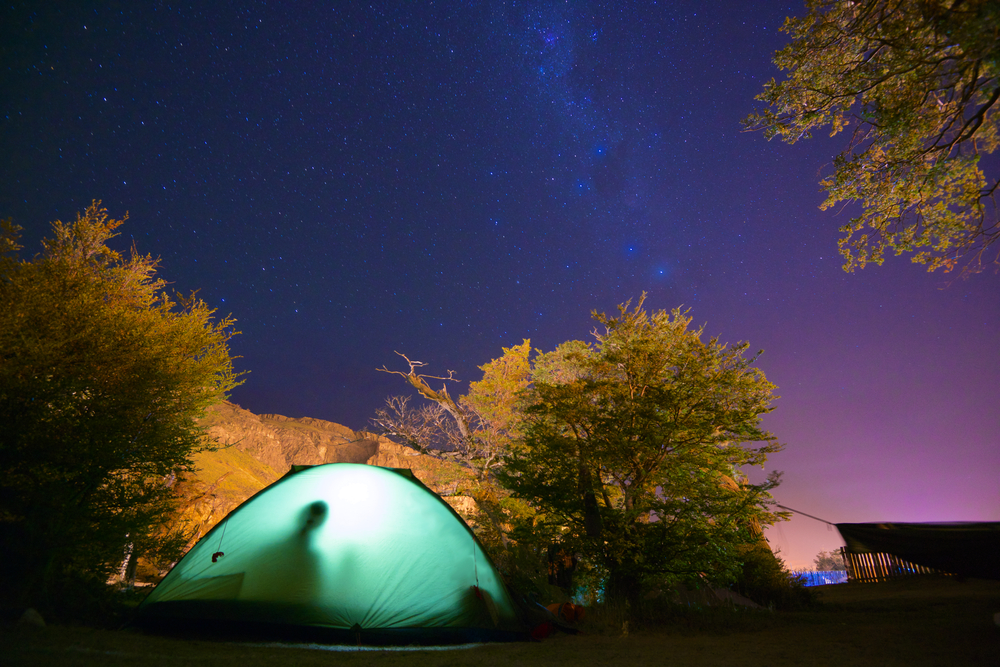 Bolivia’s huge expanse of other-wordly salt flats are mostly visited only by day due to the extreme temperature changes, but you can take an Airstream out there and camp under the stars thanks to tour provider Cox & Kings. According to Travel and Leisure, this is “the lone way to immerse oneself in this sacred, brutal place while retaining necessary creature comforts like water, electricity, and premium Scotch […] Once it was pitch black, the Universe lit up and our guide Gustavo Morales whipped out a laser pointer and gave us an astrology lesson.” Read all about it here; more information on the tour provided by Cox & Kings here. 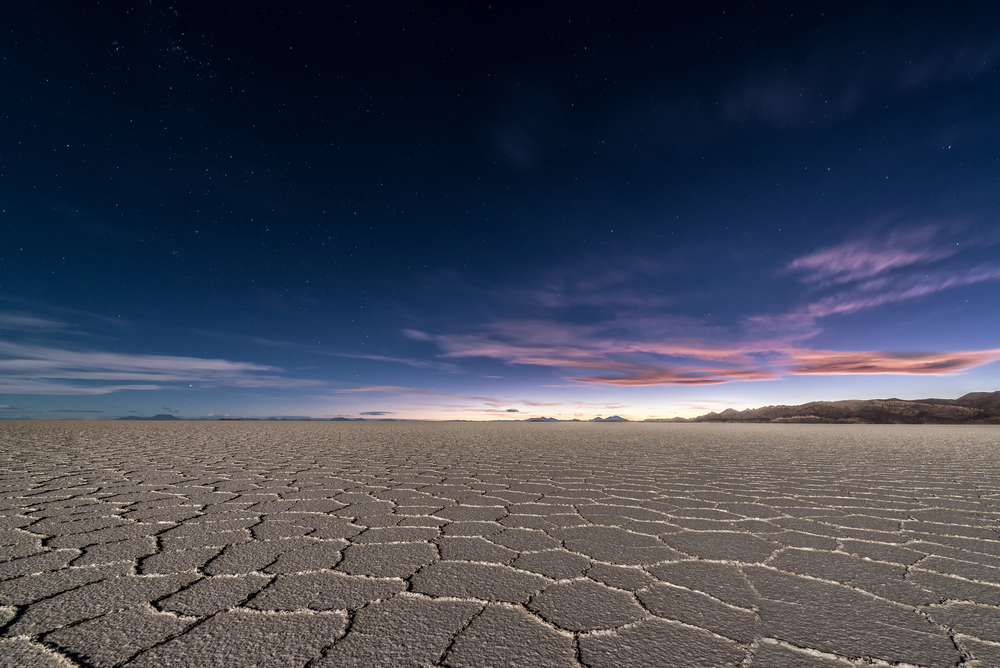 Mancora’s luxury boutique hotel K!CHIC offers a suite (the Himalaya) which has a full queen-size bed on a terrace that you can lounge in while you take in the stars – not to mention the incredible ocean view. More information here. 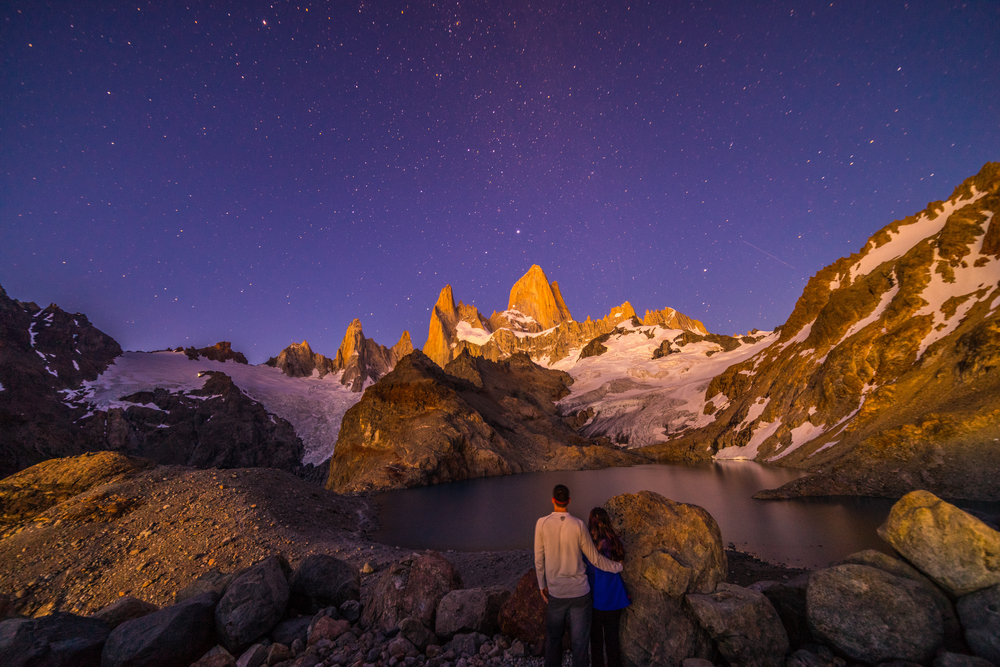 Night time at Mount Fitz Roy in Patagonia, on the border between Argentina and Chile | © Nicholas Courtney/Shutterstock

The Patagonia Camp in Chile offers private luxury yurts with domes that give you access to the night sky without ever having to leave your snug little yurt-bed. The site is located in the middle of a forest of unique coihue trees with views of Lake Toro and the mountains of Torres del Paine National Park. More information here. 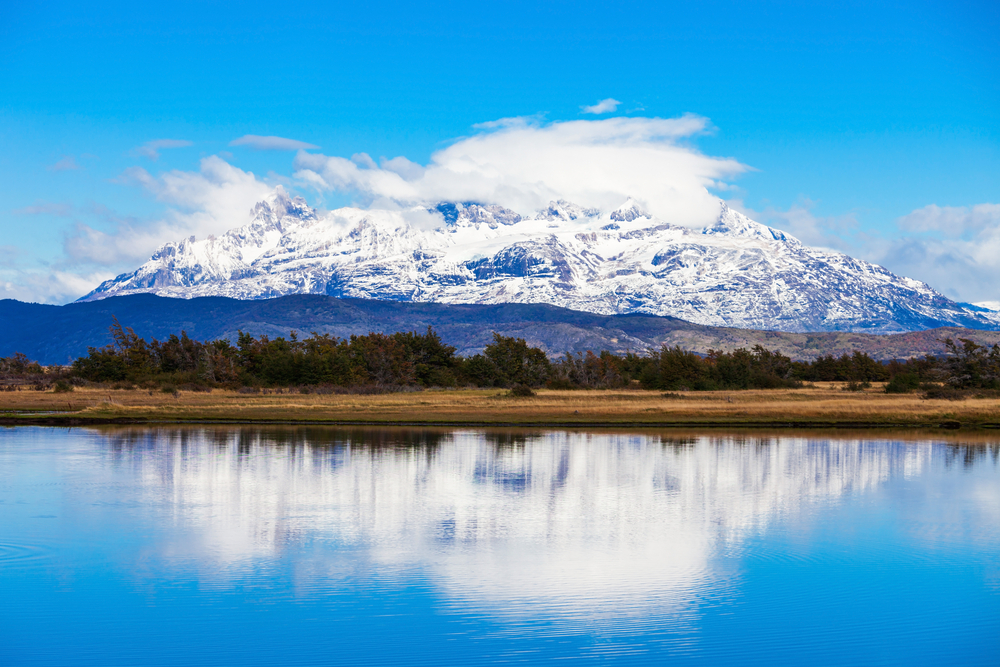 How about gazing up at the sky from the tree tops? You can do this and more in Peru, at the Treehouse Lodge in Iquito. Accessible only by boat up the Yarapa River in the northeast of the country, its hanging, fort-like lodgings make the place look like something out of Peter Pan’s Never Never Land. This is definitely a different way to take in the stars – more information here, plus a video:

Take in the stars amid the incredible biodiversity of Argentina with project Yporá. The eco-community offers tents and other accommodations on an island in the Tigre River delta. Located in the Paraná Biosphere Reserve, Yporá aims to connect visitors with nature, offering various activities and programs. More information here.

This gigantic waterfall spanning Argentina and Brazil is worth seeing in and of itself, but it’s even better appreciated under the night sky. For this, book a night walking tour to the waterfall during the full moon. Most hotels will offer providers – or you can book with the Argentine Exception – then read this guide to planning a trip to the world-famous waterfall. 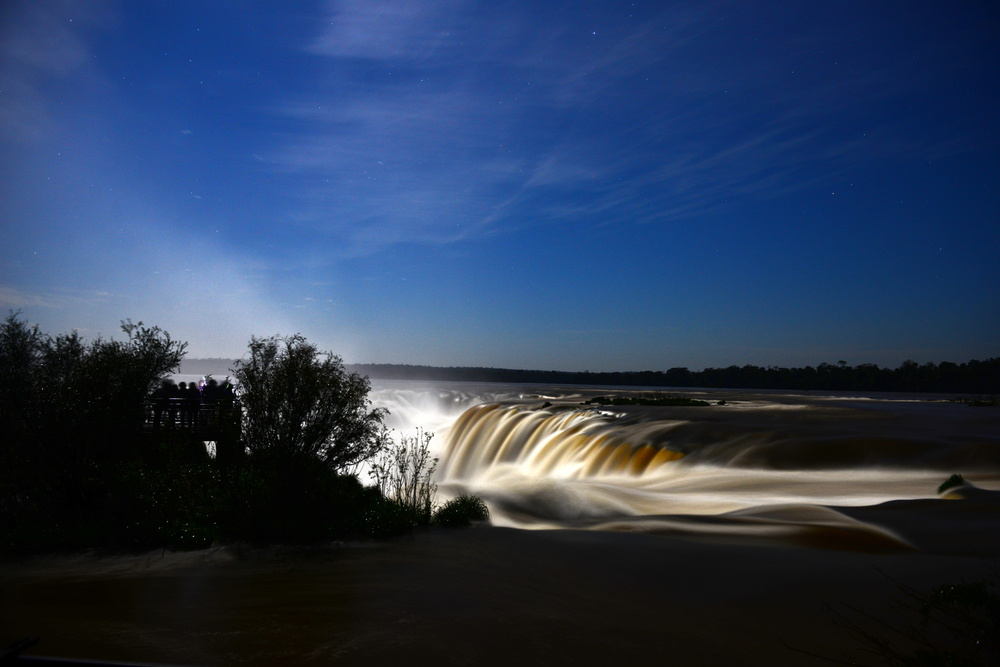 Galapagos Safari Camp gives you breathtaking night sky views from their Viewpoint Terrace as well as from luxury tents with their own private balconies. The 55-acre tented farm community offers panoramic views of the Pacific Ocean and a host of activities (including a kids’ club) for exploring Ecuador’s famous “enchanted islands.” More here. 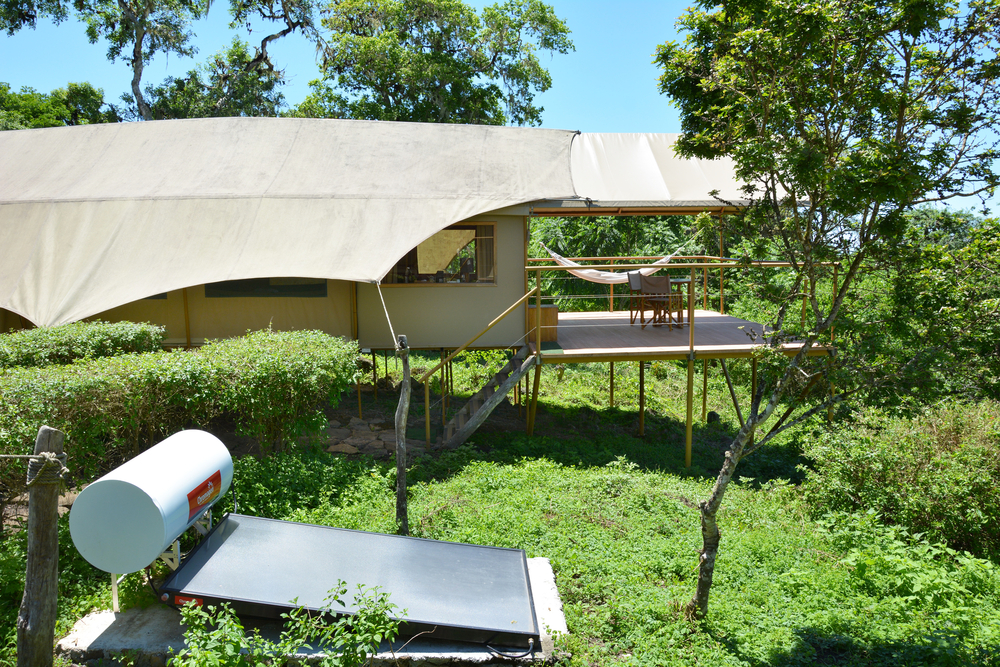