11 Reasons Why You Should Visit Tilcara, Argentina at Least Once In Your Lifetime 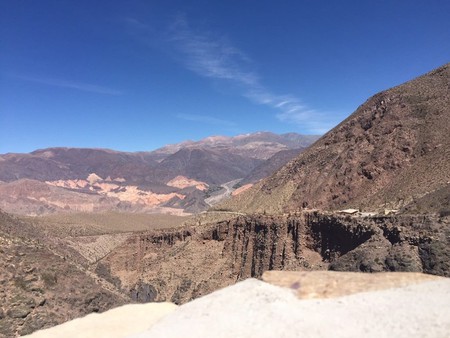 In the picturesque mountain valley Quebrada de Humahuaca – a Unesco World Heritage site – lies the dusty and enchanting town of Tilcara. With traces of human habitation that date back more than 10,000 years, Tilcara is one of the oldest continuously inhabited places in Argentina. The town’s rich indigenous culture and the dramatic mountains that surround it make this little town a very appealing destination in Argentina – and one you should definitely add to your itinerary. Here are 11 Reasons why you should visit Tilcara, Argentina at least once in your lifetime. Nos vemos allí! 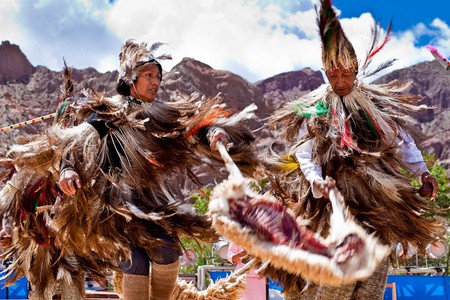 You can’t help but fall in love with the region’s indigenous culture and traditions. Jujuy province is home to a high number of households with people who recognise themselves as indigenous, or are direct descendants of indigenous people, and the influx of tourists hasn’t stopped Tilcara’s native traditions from flourishing. Probably the most significant spiritual entity, which is deeply rooted in the Andean culture, is Pachamama – the goddess of fertility in Inca mythology. Pachamama is an inseparable part of the local folklore, and if you visit Tilcara in August, you can experience it first-hand at the annual festival dedicated to her. 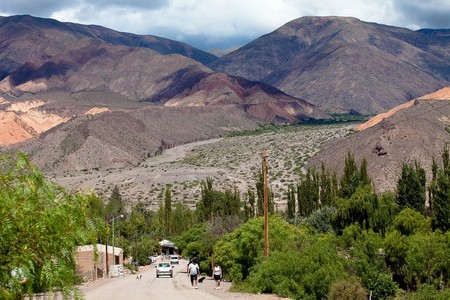 When was the last time you woke up to the sight of the sun rising over dramatic, rugged mountains while the birds were cheerily chirping outside your window? There are plenty of spectacular natural sights in Argentina, but there’s something quite special about the ancient town of Tilcara. The landscape is untouched and dreamlike, and you can almost feel the ancient energy around you wherever you go. 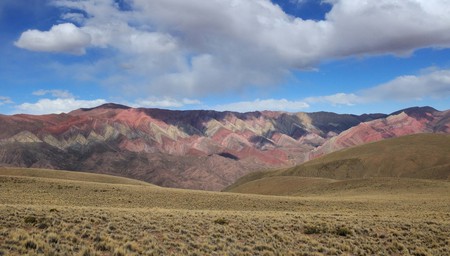 Located in the small neighbouring town of Humahuaca, the Hill of Fourteen Colours is one of the main attractions in the area. If you’re not driving, the easiest way to get to Hornocal is to ask your hostel for a reliable driver. The driver will take you up to the hill, which is 4,300 metres above sea level. From the hill, you can admire Hornocal and take some stunning shots of this spectacular site. Many locals trust the medicinal properties of coca leaves to help them with altitude sickness. The Andean people have been cultivating and using the leaf for years to treat altitude sickness and as a component of religious ceremonies.

Step off the beaten track in Purmamarca 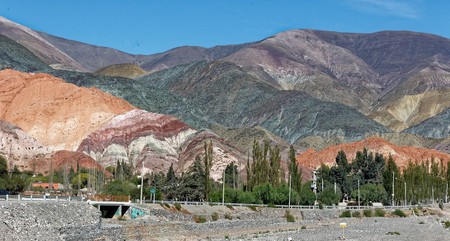 You’ll be pleased to hear that there isn’t just one strikingly colourful hill near Tilcara – there are two! The small village of Purmamarca lies under another spectacular hill, Cerro de los Siete Colores (Hill of Seven Colours). The town is within an easy reach from Tilcara – just hop on a local bus heading in that direction. While in Purmamarca, stop by a popular foodie destination Kuntur, where you’ll be presented with an abundance of traditional dishes, such as goat meat cazuela (traditional stew), quinoa risotto and many more. 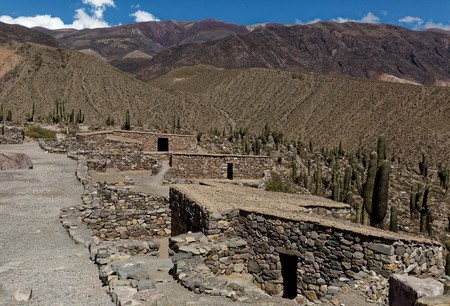 While in Tilcara, you can also enjoy the pre-Inca fortification ruins, built in the 12th century by the Omaguaca tribe. Its location was strategically chosen to enable the inhabitants to see miles away, giving them an opportunity to protect themselves from enemies. Wander around the ancient dwellings and the town square, while you learn about how this indigenous tribe lived. There’s also a museum on site, for those keen to learn more about the history of the Andean culture, as well as a small botanical garden with cactus species native to the area. 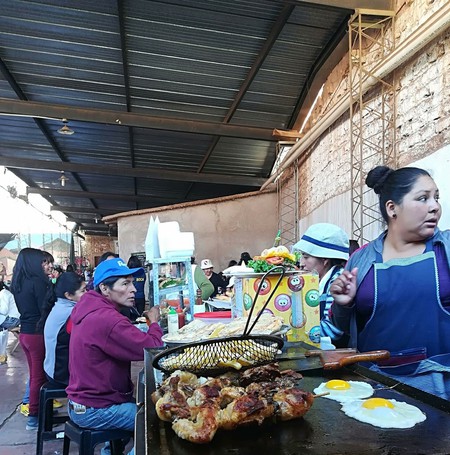 The town’s bustling market can be found near Plaza Sergento Antonino Peloc. If you’re looking for a place to lunch like a local, this is where it’s at. You’ll find several very affordable lunch options to satisfy your hunger, which are also popular among the locals. You’ll find chicken skewers, locro (hearty thick stew), empanadas (traditional South American pastry) and more. Various vendors serve lunch until about 1:30 p.m., so make sure you get there early to avoid disappointment. 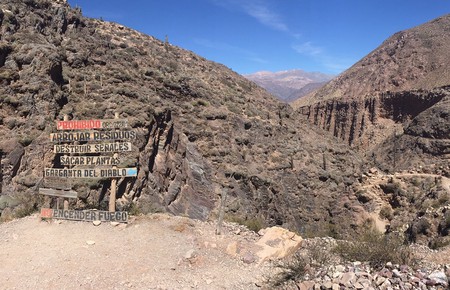 There are two ways to get to El Garganta del Diablo, a beautiful waterfall carved into the dusty rocks of a canyon: You can either trek through the rugged, dry terrain or drive up a dirt road by car. If you decide to trek there, it’s best to leave early in the morning in the hottest months (October to March). It gets pretty hot during the day, making this shade-less 7-kilometre hike a bit of a challenge. 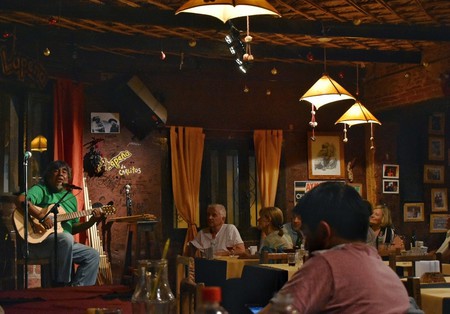 When in Salta and Jujuy regions, you’re bound to fall in love with peña – a folk concert that involves singing and dancing. La Peña de Carlitos is a wonderful little restaurant where peña is performed most, if not all, nights and delicious, authentic and regional food is served. Don’t be surprised to see llama meat on the menu in dishes like cazuela de llama or lomo de llama – it’s the delicacy of the region. If you’re lucky, you’ll also get to see Carlitos, the restaurant’s owner, who often grabs his guitar and performs a song or two to the excited diners.

Have an atmospheric meal at El Nuevo Progresso

You’re bound to have a unique culinary experience at this imaginative gem. The restaurant has found the perfect combination of artistic atmosphere and delicious, local cuisine-inspired food, such as stews and meat dishes. Praised by tourists for its art work and juicy steaks, El Nuevo Progresso is a place you should probably try if you’re in the area. Even your bill comes hand-illustrated with beautiful drawings!

Take a bus to the beautiful Quebrada de Las Señoritas 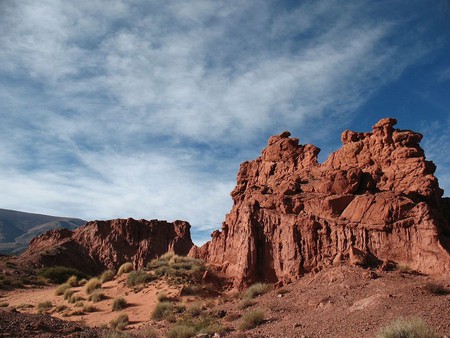 In a tiny roadside town, a short bus ride away from Humahuaca, Quebrada de Las Señoritas (Gorge of the Ladies)awaits. After an hour’s trek through rugged, terracotta-coloured landscapes and an occasional giant cactus, you’ll arrive at the beautiful gorge with red, white and black colours. If you get hungry (and you will if you trek to Quebrada de Las Señoritas), you should grab lunch at Cerro Las Senoritas – a little restaurant that serves tasty, home-cooked food. 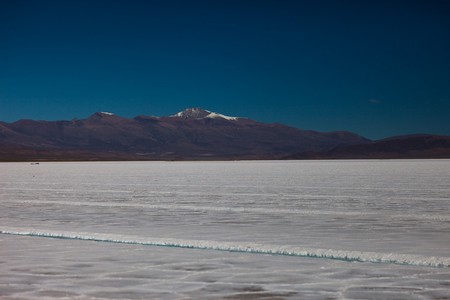 At an altitude of 3,450 meters above sea level, Salinas Grandes is a spectacular place. Marvel at what looks like an ice desert and the reflections of blue sky and white clouds in the icy mirror – it sure isn’t an everyday sight. There are several tour companies that can take you to the Salinas Grandes from Tilcaram, or you can rent a car and drive there. Do bring a picnic, you might struggle to find any open food places around.