10 Things You Need to Know Before Visiting The Casa Rosada 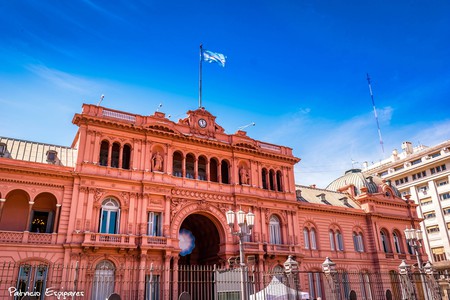 The Casa Rosada, or the presidential palace, is one of the most emblematic buildings in the Argentine capital of Buenos Aires. Known for its unique pink colour, this palace has been at the focal point of much of Argentina’s history. Here’s everything you need to know before visiting the Casa Rosada. 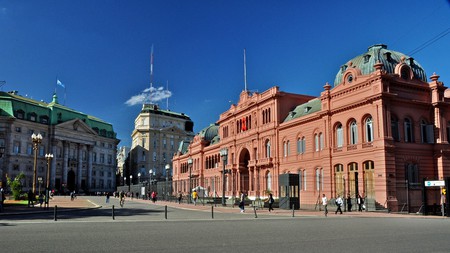 The Casa Rosada and the Plaza de Mayo | © Geoff Livingston/Flickr

One of the best ways to discover the secrets of the Casa Rosada is by taking a guided tour. Tours are offered in Spanish and English, are free of charge and can be reserved by visiting the website. An experienced guide will take you around the public areas of the presidential palace, and you can see the incredible architecture, patios and regal atmosphere of the house in all its glory on the inside.

This is the executive mansion, not the official residence, of the president

The Casa Rosada is officially called the executive mansion of the president of Argentina, which is different to the official residence, which is the Quinta de Olivos in the upper class residential neighbourhood of Olivos, in the north of Buenos Aires just outside the capital. During Cristina Kirchner’s term in office, it was common to see the presidential helicopter flying over the city, taking her from the Casa Rosada to the Quinta de Olivos. Only one president has actually lived in the Casa Rosada, and that was Roque Sáenz Peña, between 1910 and 1914.

It is made up of lots of different buildings 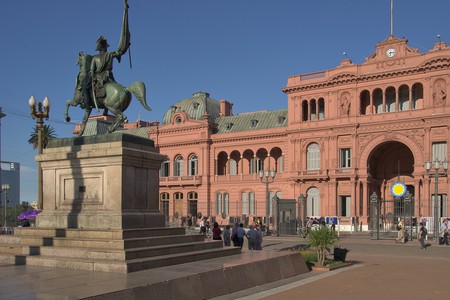 The Casa Rosada, an amalgamation of former buildings | © Rob Oo/Flickr

As much as the Casa Rosada looks like a uniform construction, it is actually the result of an amalgamation of many existing buildings that were built on the site over the years. In the late 1500’s, what is now the Plaza de Mayo was declared the founding place of the city, and a fort was established where the Casa Rosada now stands. In the mid 1800’s, a British architect designed the Customs House to the rear of the fort, and in the late 1800’s the Post Office was built on a part where the old walls of the fort had been demolished. These buildings were eventually consolidated into the Casa Rosada at the very end of the 19th century.

Although there is a large swath of land between the Casa Rosada and the Rio de la Plata, originally the rear of the site actually went to the water’s edge. Buenos Aires is a city that turns its back on the river, and now the port regeneration development at Puerto Madero provides a buffer between the city and the river. The riverside location was why this site was chosen for the original Customs House, because all of the goods coming into the city were processed in this building. 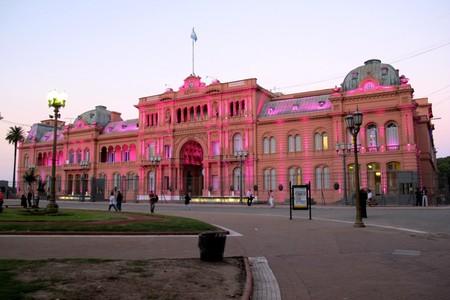 The Pink House at its pinkest | © bibliojojo/Flickr

As with every good historical site, the Casa Rosada is full of legend and lore, and one of the most famous tales is about the iconic colour of the palace. One story goes that the facade was painted with cow’s blood instead of paint so that it would be resistant to Buenos Aires’ famous humidity. But it is more likely that the house was painted pink to try and diffuse political tensions at the time – the colours of opposing political parties were combined to make pink: the Federals used red, while the Unitarians used white.

Eva and Juan Peron perhaps made the most use out of the Casa Rosada’s famous balcony, which overlooks the city’s main square, the Plaza de Mayo. They would address the masses in the 40’s and 50’s, and these speeches were immortalised by Madonna in the Hollywood movie Evita. More recently, Cristina Kirchner has held court from the balcony, and even new president Mauricio Macri has engaged in some dad dancing from this perch.

There is a museum behind the palace

Located behind the Casa Rosada is the Casa Rosada Museum, where you can see a wealth of presidential paraphernalia from past presidents and eras of Argentina democracy. The museum stands on the site of the original fort, and tells the story of Argentina from colonial times to the present day.

Buenos Aires in the 19th was a hotbed of development, the nascent city seeing a boom in construction, with many important administrative, civic and cultural institutions being built at this time. One of the architects involved in the construction and consolidation of the Post Office, fort and presidential palace buildings was Francesco Tamburini, who was also the principal architect of Buenos Aires’ famous opera house, the Teatro Colon. 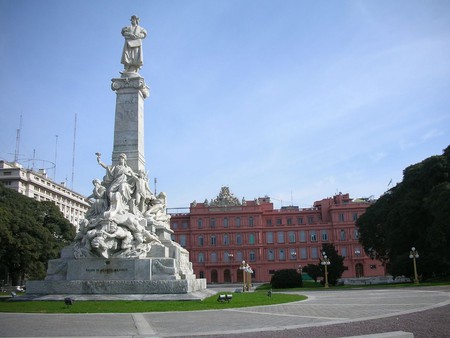 A monument to Christopher Columbus had been located at the rear of the Casa Rosada, but was replaced by Cristina Kirchner towards the end of her term with a Bolivian freedom fighter, Juana Azurduy, a gift from Bolivian president Evo Morales in 2015. The replacement of the Columbus statue with a female guerrilla from Bolivia is a statement on the past and present of Latin America.

It is the site of mass protests in the capital

If ever there is a protest in the capital of Buenos Aires, the Plaza de Mayo, the city’s main square in front of the Casa Rosada, is the destination for the manifestation. This is because the public want their voice to be heard by the president, so what better way to show the authorities that they mean business than by protesting outside the presidential palace. On the ground in the Plaza de Mayo, you can see the symbols of the headscarves of the Mothers and Grandmothers of the Plaza de Mayo, and there is a permanent encampment of veterans from the Malvinas, or Falklands, War, who are in constant protest against the state.