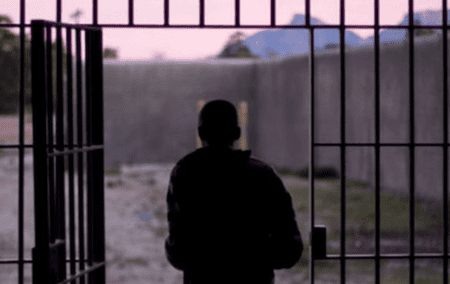 A man’s first and immediate impressions of freedom upon his release from prison is our Vanuatu selection for our Global Anthology.

The gigantic mass of iron slid behind him and closed a year of detention. The last resonant sounds of its clattering metals marked out a new beginning for Tôghàn. A life planned, decided. A fine rain had begun to fall, which seemed to bless these first minutes of freedom he had so desired and dreamed of. His heartbeat matched the gentle rhythm of the patter of drops on his skin, now paled by incarceration. At a slow pace, his eyes were wandering among the trees and boulders, discovering mountains and valleys far away. As Tôghàn stepped out, a guard stationed on one of the posts shouted out “See you next time!” Tôghàn halted, gently turned his head, and proclaimed with dead seriousness: “There will be no next time!” Another guard nearby burst into laughter: “That’s what they all say!” Tôghàn left the two men with their own jokes. The rain intensified, the sky darkened into gray and cars passed in procession in front of the vacant lot that served as a parking area. Raising closed eyes, Tôghàn heard a little voice emerge from the depths of his thoughts: “And now it all begins! Right now!”

This excerpt is from Tôghàn, which is published in the French original by the Alliance Française de Vanuatu, with an introduction by Nobel Laureate for Literature J. M.G. Le Clézio. Translated by Simon Leser.