Tuvalu at The Venice Biennale: Exposing the Threat of Global Warming 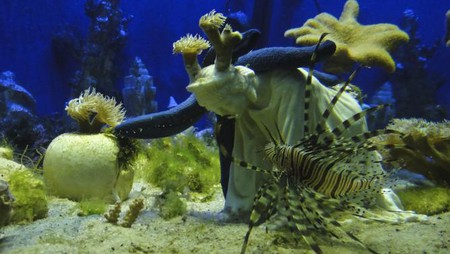 Tuvalu is a group of small islands nestled between Hawaii and Australia in the heart of the Pacific Ocean. The highest point of Tuvalu is a mere 4.5m above sea level, leaving the islands extremely vulnerable to rising sea levels as a result of global warming. The threat of submerging the islands into extinction confirms Tuvalu as a victim in the complex system of economic development and political hierarchy surrounding climate change. Through the eyes of the Tuvalu people, first world countries are sacrificing Tuvalu for financial gain and personal greed.

2013 sees Tuvalu participating in the Venice Biennale for the first time. Their thematic direction, Destiny.Intertwined, merges together global issues, politics and art. The pavilion draws attention to the repercussions of both climate change and irresponsible use of natural resources by exhibiting pieces heavy on messages of destruction, but still balanced with a spirituality that reminds the audience how fragile the Earth’s ecosystem really is. Taiwanese artist Vincent J.F. Huang has been selected to represent Tuvalu and produces pieces that are visually comprehensive, abrupt and at times disconcerting. He succeeds in forcing the audience to confront a reality which they are both contributing towards, and being affected by.

Destiny.Intertwined is not simply focused on the injustice of Tuvula’s fate but paints an overall picture of global ignorance surrounding this issue. Despite countries such as Tuvalu seeing immediate changes, Huang reinforces that global warming will eventually affect everyone. More powerful countries cannot be protected by the fact that they belong to the first world; climate change is all encompassing. 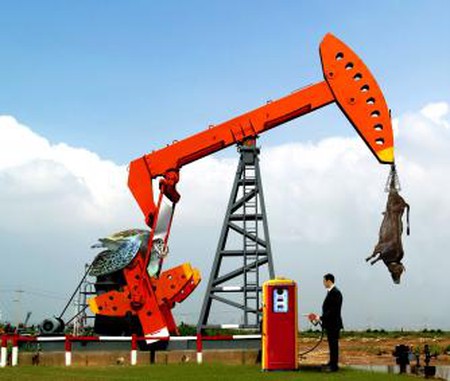 In The Name of Civilization | Courtesy Tuvalu Pavilion

Vincent J.F. Huang works will be curated by An-Yi Pan, Szu-Hsien Li and Shu Ping Shih. In the Name of Civilization is an installation which demands audience participation. To activate it, the individual must use the oil pump, triggering the machinery and consequently killing both the bull (symbol of Wall Street) and turtle (symbol of Tuvalu). The piece of machinery is identified with first world countries and represents capitalist culture, and therefore reveals how, in the pursuit of this modern lifestyle, humans are endangering the lives of animals. The piece transcends cultural barriers by acting as political and economic commentary; if first world continues continue to place greed before the welfare of weaker countries, Tuvalu will also face extinction.

Modern Atlantis Project features an aquarium housing coral reefs. This living piece does not simply focus on the wonders of nature, but within this tank lie miniature sculptures of iconic landmarks such as the Statue of Liberty. Associated with industrial civilisation, these landmarks represent first world countries that facilitate global deterioration, and Huang visually suggests they too will be underwater one day. The coral and miniature landmarks create a surreal ecosystem of their own and as the corals grow and develop, they consume all resources within the tank. This then triggers a coral bleaching event causing them to die. Modern Atlantis Project is a living example of how growth can be detrimental to life, especially growth within an industrial culture. It is also a commentary on how necessary it is to respect the Earth’s resources and limitations. 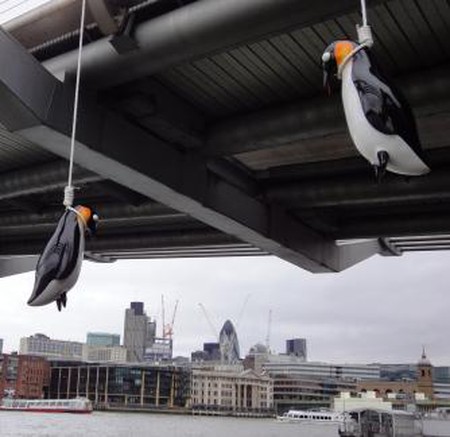 Vincent J.F. Huang graduated with a Masters in Art from Grays School of Art, Scotland in 2000 and now works in London and Taipei. His works centre mainly on current environmental issues whilst critically engaging with technological advancements and their international impact. Huang observes civilization and its obsessive consumer culture, often ridiculing this self-destructive way of life. His works address future implications and remind audiences of environmental crisis’ that can be cultivated by this neglectful globalized generation.

Huang works in a variety of mediums and often plays with scale and interactivity of his installations. He repeatedly uses animal imagery as a metaphorical device, and often combines animal images with historic ones to emphasise his message. Vincent J.F. Huang has recently exhibited in UK, Germany, Italy, China, Australia and Taiwan.

Send the team an e-mail.

The 55th International Art Exhibition of the Venice Biennale will take place from 1 June – 24 November. The Culture Trip’s Venice Biennale Series is an article series leading up to the start of the exhibition. With 88 countries participating in this year’s Biennale — 10 of them for the first time — and 150 artists from 37 countries, our coverage over the next couple of months will highlight a selection of the National Pavilions that will be participating in the 2013 edition of the Venice Biennale. Watch the Biennale page on our site or The Culture Trip’s Facebook page for our daily Biennale articles and updates.