This Dazzling Immersive Film Lets You Surf a Tahitian Wave 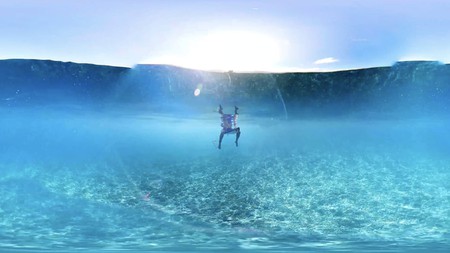 Screenshot from 'The Anatomy of Surf' | © Samsung

Ride through the barrel of a Tahitian wave with professional surfer Ian Walsh in The Anatomy of Surf, an immersive-reality film from Samsung and VR studio Hidden Content.

The waters off the shore of Teahupoʻo, a small village on the southeast coast of Tahiti, are renowned for their heavy, glassy waves. Framed by forested mountains and steep, abrupt reefs, these waves regularly reach two to three metres (six to 10 feet) in height, and there have been reports of 6-9m (20-30ft) crests in the past. Swelling quickly and breaking in shallow water, the surf is among the most dangerous and challenging on Earth.

Long considered too steep to be surfable, the Teahupoʻo waves were finally beaten by big-wave legend Laird Hamilton in 2000, setting the standard for professional surfers around the world. The spot has become home to the annual Billabong Pro Tahiti competition, where American surfer Ian Walsh towed the biggest wave of the season.

Now, in an effort to share the unique experience of riding incredible waves from the inside, Walsh has teamed up with Samsung and Hidden Content (a VR and 360-degree-video production studio) to create The Anatomy of Surf, a narrated film that transports viewers into the barrel of a Teahupoʻo wave from Walsh’s point of view.

Shot on a helmet camera, the video allows viewers to click and drag for 360-degree views, completely enveloping them in the wave. The Anatomy of Surf showcases the storytelling possibilities of VR, demonstrating technology’s potential to make even the most inaccessible experiences on Earth accessible.

SAMSUNG VR – The Anatomy of Surf w/ Ian Walsh from HIDDEN on Vimeo.

The Anatomy of Surf is currently open to the public as an instillation at Samsung 837, the brand’s showcase studio, in New York City.

Inspired by this story? Read more about the new storytelling frontier of VR or browse our guide to Tahiti.