Is a Floating City in French Polynesia Really Going to be Built?

A mock up of the island off shore. | © Blue Frontiers

Seasteading Institute, a nonprofit company co-founded by PayPal billionaire Peter Thiel, wants to build a city floating on the waters of French Polynesia, which would have its own government and cryptocurrency.

The idea of a city on the seas has been touted in technology circles for some time, and has even been the subject of ridicule in the HBO show Silicon Valley. This version was initially supported by Thiel, the famed libertarian billionaire who co-founded PayPal and funded Hulk Hogan’s lawsuit which put the media website Gawker out of business.

Seasteading Institute was founded nearly a decade ago, and in early 2017 the government of French Polynesia allowed the organization to test its oceans for suitability for a floating city. In May 2018 a pilot project was announced, and in July the institute announced it will build 300 houses. 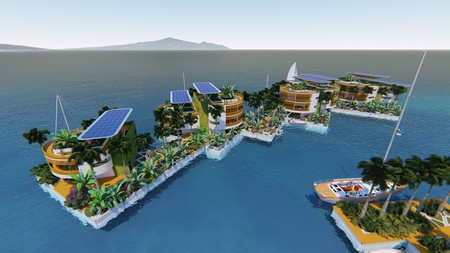 An idea of how the homes would look | © Blue Frontiers

Pre-sales have also begun for the Varyon cryptocurrency associated with the new city. Right now there are numerous potential designs for the city, which will be located approximately half a mile from land, and linked to the shore by a ferry.

The floating city was originally proposed as a libertarian idea, where residents would be able to escape from government influence. Joe Quirk, resident of Blue Frontiers, the startup which will manage the city, told Business Insider the idea has evolved to more than that, where the focus is on cities that can survive rising sea levels and the effects of climate change.

Although Thiel, who is known for his anti-big government views, is no longer involved, the Seasteading Institute and the Blue Frontiers all have strong connections to libertarian ideals; Seasteading Institute co-founder Patri Friedman wrote the book Seasteading: How Floating Nations Will Restore The Environment, Enrich the Poor, Cure The Sick, and Liberate Humanity from Politicians. For people with a libertarian viewpoint, the idea of cities floating on the sea, away from the conventional rules and laws of the land, appeals greatly. 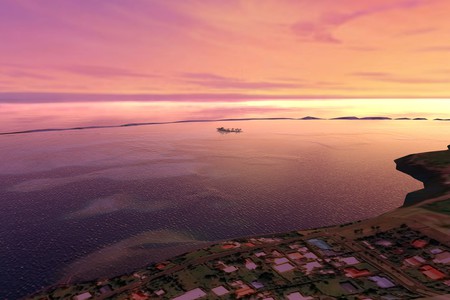 How the island will look from the shore | © Blue Frontiers

This is not the first time someone has attempted to build a new country in the sea. In 1972, Lithuanian-born millionaire Michael Oliver founded a state off the coast of Tonga, contracting a company to build an island by dredging the seabed. The island was called the Republic of Minerva and Oliver declared independence and made his own currency. But the King of Tonga took offense, and deposed Oliver. The island was eventually reclaimed by the sea.

The Seasteading island agreement with French Polynesia will avoid the issues Oliver faced. But the idea of a floating city with no laws is still a long way off transitioning from science fiction to reality.