How to Spend a Day on Bora Bora, French Polynesia 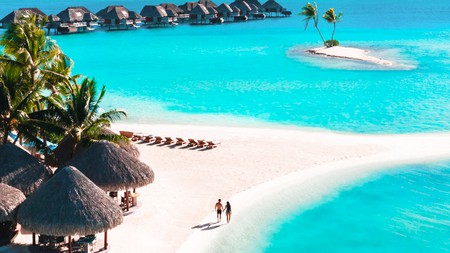 From palm tree-lined beaches to the luscious volcanic interiors, spending one day on an island like Bora Bora has never been easier | Courtesy of Four Seasons Resort Bora Bora / Expedia

Once you set eyes on Bora Bora, you’ll soon see why it’s a bucket list destination. This idyllic French Polynesia island – which sits northwest of Tahiti – boasts a lush volcanic interior, fringed with palm trees and white sand beaches. From snorkelling in the protected lagoon to hiking up Mount Pahia, here are some top things to do on Bora Bora in 24 hours.

Set sail for Bora Bora and its surrounding islands by booking onto Culture Trip’s eight-day sailing adventure around French Polynesia, helmed by an experienced skipper.

What to see and do in Bora Bora

If you’re in need of some rest and recuperation, then there’s no better place to unwind than Bora Bora. The island is blessed with a spread of sublime beaches, where you can simply pitch up, sit back and relax – interspersed with refreshing dips in the azure waters, of course. Matira, the Four Seasons Resort Bora Bora and the Conrad Bora Bora Nui are among a handful of the best Bora Bora beaches. 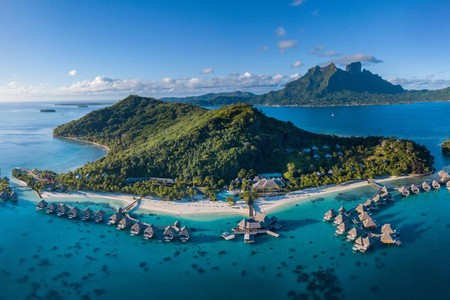 Fancy something more active? Hike the verdant slopes of Mount Pahia for stunning views from the top. Mount Otemanu is actually the highest point on the island at 727m (2.385ft), but its vertical rock face means it’s not possible to reach the summit. Another popular hiking route in the district of Faanui leads to old artillery guns left behind by the Americans during World War II. For the super adventurous, the 19mi (30km) Bora Bora Loop – running along the coast and through villages – should hit the spot.

When you’ve had your fill of land-based activities, hit the ocean to discover the wealth of wonders lurking below the surface. Top dive sites include Tapu, Muri Muri, Toopua and Anua with barracudas, manta rays, moray eels, lemon sharks and sea turtles among some of the creatures you might encounter. 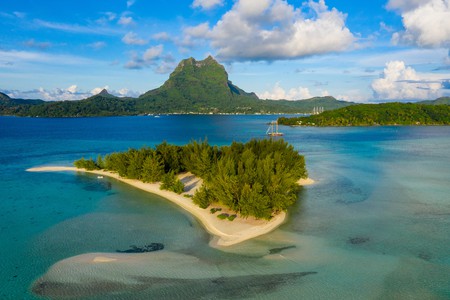 What to eat and drink in Bora Bora

Fish is the staple ingredient around the islands of Tahiti and the national dish is Poisson Cru, which consists of a moreish mix of raw fish, citrus juice and coconut milk. While on Bora Bora, make sure you put in an order for this speciality, with the Bora Bora Yacht Club being one of the recommended restaurants. Tuna and mahi-mahi are two other popular items you’ll find on menus – served both raw as sashimi and cooked.

If you want to try something a little unique, dip into the Lagoon Restaurant by Jean-Georges at the upscale St Regis hotel. This eatery prides itself on being the only place in the region serving up Uravena, a fish that is extremely difficult to catch as it is found between 200m-400m (656ft-1,312ft) deep.

On the drinks front, get into the island swing of things with a piña colada or mai tai, infused with local rum at one of the top bars. Follow in the footsteps of Buzz Aldrin and Pierce Brosnan to Bloody Mary’s – where you can try the venue’s namesake drink or the vanilla rum punch, another house special. 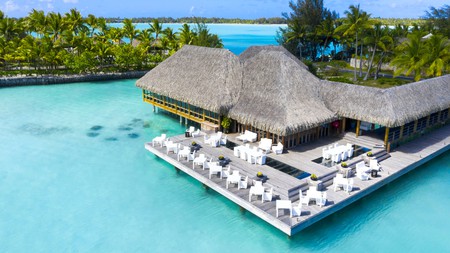 Dine at one of these oceanside restaurants in Bora Bora and wash your worries away | Courtesy of Lagoon Restaurant by Jean-Georges at The St. Regis Bora Bora Resort / Expedia

There is no full-service marina on Bora Bora, but there are plenty of places to moor up within the tranquil lagoon. Once you’ve navigated the channel into the lagoon, some of the most popular moorings include the Bora Bora Yacht Club – which has mooring buoys for boats up to 20m (65ft) – Bloody Mary’s restaurant, which has a timber dock for you to tender to and MaiKai Marina, which mainly caters to superyachts.

How to get to Bora Bora

A frequent air service runs to Bora Bora from the French Polynesian capital of Papeete on Tahiti and the neighbouring island of Moorea. Flights run with the domestic airline Air Tahiti and it’s also possible to charter planes for transfer. The airport in Bora Bora is located on the smaller islet of Motu Mute and it’s just a short ferry ride to the port village of Vaitape. Most of the luxury resorts have private boats docked at the airport for direct hotel transfers or there are shuttle and public transport services available from Vaitape.