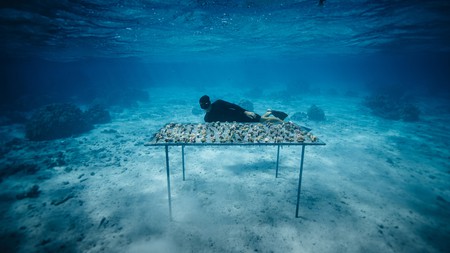 Growing up on a French Polynesian island in the South Pacific, Titouan Bernicot witnessed the reefs dying before his eyes. Realising it was a global problem, he set about making a change. Now the 21-year-old is using social media and celebrity backing to rebuild the reefs, one coral at a time.

You might not have heard of Mo’orea, but you’ve probably seen it. Wanderlust-fuelling pictures of the French Polynesian island, just a few miles from Tahiti, with deep blue waters and lush, mountainous backdrops, are Instagram gold.

Mo’orea is fringed by a large coral reef that’s home to some of the world’s most diverse marine life. It’s also home to 21-year-old Titouan Bernicot, founder of conservation organisation Coral Gardeners. The earliest years of his life were spent in a tiny house on a minuscule island in the Tuamotu Archipelago, next to the reef. When he was three, his family moved to Mo’orea to be closer to schools, and it was the waters surrounding the 16km-wide island that sparked Bernicot’s passion for the ocean and its inhabitants: “I grew up there. I learned how to dive, to surf, to spear-fish. I fell in love with the underwater world. The reef is my playground.”

Bernicot spent his childhood in awe of the vibrant colours of the coral – the backdrop to his adventures along the shore and in the water. Then one day he noticed a change. “When I was 16, a friend and I went surfing,” he recalls.

“As we waited for the wave, we saw some bleached coral. That was the first time in our lives that we’d seen these white spots under our feet.”

Puzzled by the transformation, he and his friends began researching. “We discovered that the coral reef gave us everything we needed in our lives,“ says Bernicot. “The best moments surfing on reef break waves, swimming with sharks, the fish we eat. They protect our island from erosion; we wouldn’t be here now without reef protection.”

After speaking to a local marine biologist, it dawned on him that the bleaching was part of a shocking global development: “We realised that the coral was dying, not only in Mo’orea, but all around the world. And that it was happening so fast.” 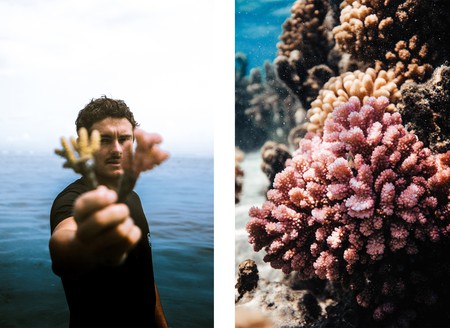 Titouan Bernicot founded Coral Gardeners in Mo’orea, French Polynesia, after noticing the colour was disappearing from the reefs | | © Ryan Borne

Bleaching mainly occurs when the sea temperature rises and coral reefs – made up of many thousands of polyps, which are permanently fixed invertebrate animals with hard exoskeletons – expel the algae living within them.

It’s a conspicuous sign of the damage being done to our oceans, and the consequences of a dying reef could be disastrous, since coral reefs provide a home to a quarter of marine life. As living, breathing ecosystems, coral reefs are essential to the ocean’s health, playing much the same role as rainforests do on land. Not only does the algae provide the coral with energy, it also supplies the oxygen that sustains marine life.

Rising sea temperatures, caused by global warming, are devastating coral reefs. Incidents of mass coral-bleaching have become five times more common over the past 40 years, and the most recent event – which began in 2015 – caused damage to more than 70 percent of the world’s coral. Experts predict that more than 90 percent of these ecosystems could be wiped out by 2050.

Armed with a new understanding of the perils of coral bleaching, Bernicot began looking at ways to help restore the reef. He remembers his first experience of planting coral fondly: “I had the opportunity to choose my favourite coral and to plant it. I came back one month later and it was double the size, with some little fish in it. It was a new home for marine life. I fell in love with that feeling of bringing new life to the ocean.”

And so Coral Gardeners was born. Aided by GoPro footage taken by friends, and backed by a crowdfunding campaign, Bernicot started giving talks around the world on the damage being done to the reef. Returning to Mo’orea and teaming up with childhood friends Taiano and Maorigai, work began in earnest.

The organisation has gone from strength to strength, with a team of 16 now working full-time on education and conservation.“With our storytelling and young determination, it’s on,” he says. “We just need to find people who believe in us and we’ll do great things.”

For Coral Gardeners, those great things start by telling the story of the reef. Bernicot sees education as crucial: “My dream is that every kid in the world knows what coral is, how important the ocean is.”

It’s a lofty ambition, but one that Bernicot takes seriously. He sees the issues that he’s witnessed on his “little island” as symptomatic of wider trends. “The colours I saw as a kid aren’t there now. There are fewer fish,” he notes. “Even on this remote island, far away from globalisation and big cities, global warming means that the corals are dying. Everyone on the planet is breathing the same oxygen, but we’re all killing the ocean. We need to create a movement.” 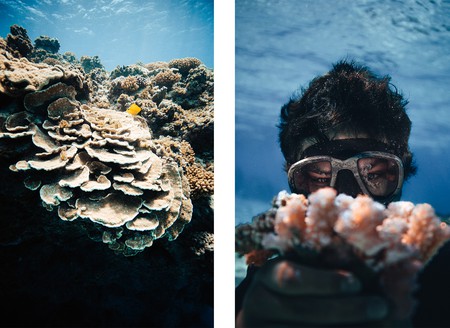 Coral reefs are living, breathing ecosystems that provide a home to a quarter of all marine life and the oxygen that keeps the oceans alive | | © Ryan Borne

Exuberant and charismatic, Bernicot has youth on his side. He hopes that people his age can really turn the tide on coral-bleaching: “The generations of my grandparents and my parents, they lost their way. They were running after profit and they forgot where they came from. My generation, and the ones to come, are way more aware. When I go to the classrooms and talk to the kids, they know way more than I did at their age.”

Education is just one strand of Coral Gardeners’ work. They’re also working directly on the Mo’orea reef with a coral-planting programme aiming to bring new life to the reef. ‘Super corals’, which are more resilient in the face of climate change, are collected and cultivated in a nursery for 18 months. After that initial period of growth, 10 percent are trimmed and replanted on the damaged reef, in the hope that they’ll spawn and create new coral. The programme has yielded some impressive results. “We’ve planted over 11,000 corals and have a 70-90 percent success rate so far,” says Bernicot.

There are opportunities for anyone from around the globe to get involved in Coral Gardeners’ work, as the organisation is funded by its coral-adoption programme. This allows supporters who can’t make the journey to French Polynesia to name their own coral and see where it’s planted.

Bernicot wants to find a way for those who do visit the island paradise to consider how to become a sustainable tourist. Coral Gardeners is based in a region that relies on tourism for its survival, which could put a conservation organisation in a bind. Reports in 2019 showed that 10 percent of the houses on Mo’orea were listed on Airbnb, and an influx of tourists to such a well-preserved area could lead to yet more environmental damage.

Aware of the hazards that tourism poses to the ocean, Bernicot sees an opportunity to raise the profile of his reef-conscious cause, while promoting a more sustainable attitude among tourists. “People realise that tomorrow, if we have too much tourism, too many jet skis etcetera, we’ll lose the beauty of our country,” he says. “So we want to make tourists happy by doing something good for the planet instead. Two years ago, we launched our eco-tour: it’s a three-hour tour where tourists can meet the team, hear about the coral gardening, and come and plant coral.”

His pride in the popularity of the tour is tangible: “People tell me it’s their favourite part of their trip to French Polynesia – that gives me hope. We need sustainable tourism. That’s the future, not only here, but everywhere.” 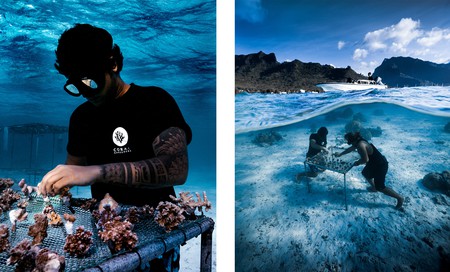 Bernicot’s restoration team tend to coral fragments on a nursery table under the water; after 18 months they’ll be big enough to plant back onto the reef | | © Harrison Kennedy

Coral Gardeners is very much a 21st-century organisation. Far removed from impenetrable science and sterile research facilities, this is conservation that chimes with the Instagram generation. Bernicot isn’t afraid to collaborate with influencers or leverage celebrity interest to spread the word.

There’s no question that the cause has been aided by the visually stunning subject matter. Pictures of turtles, whale sharks and vibrant coral crops grab the eye and encourage users to stop swiping, take a deeper dive and discover the work behind the images. The Coral Gardeners Instagram account has attracted more than half a million followers, with one of its videos garnering more than 15 million views.

Bernicot’s passion permeates every aspect of what Coral Gardeners do. His enthusiasm for the ocean, and the coral reef, is boundless, as is his ambition. “We want to be the Tesla of coral-reef restoration,” he says. “We’re working with engineers from Silicon Valley to [develop] reef restoration and to make it efficient. We want to scale up all around the world.

“It’s going to be hard, it’s going to take time, but I’m sure about something: if we think that it’s already over and we don’t try, then nothing will happen. So I want to be someone who tries.”