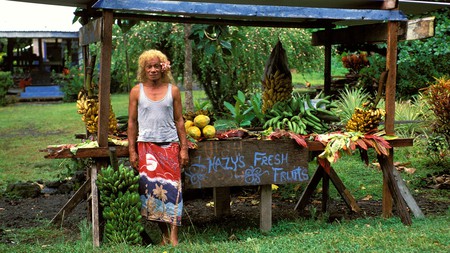 The binary gender system in Western society is far from universally accepted. On the Polynesian island of Samoa, near Fiji, fa’afafines and fa’afatamas are widely regarded as third and fourth genders, alongside male and female. Read on to discover more.

The third and fourth genders of fa’afafine and fa’afatama have always existed within Samoan society. When translated literally, they mean “in the manner of women” (fa’a fafine) and “in the manner of man” (fa’a fatama); these genders are fluid and move between the traditional world of men and women. Fa’afafines and fa’afatamas have specific roles in Samoan society, in an interesting contrast to transgenderism in Western society, which is yet to be widely accepted.

Have there always been four genders in Samoan culture?

The recognition of these genders is not a recent occurrence: pre-Christian Samoans accepted and acknowledged that every individual, man or woman, had a separate role in society. Hence, it is still acceptable for a male child to be feminine, for example. Samoan boys who display marked effeminate behaviour in childhood are recognised to be fa’afafines and are fully accepted within their families and society. In the same way, girls who exhibit more masculine tendencies are accepted as fa’afatamas. These genders tend to care for the elderly in society and educate people about sex, which is a taboo subject for men and women to discuss in public.

What is the dance of taupou?

This is one of the lasting Samoan traditions preserved by fa’afafines and fa’afatamas. The taupou is a ceremonial host, usually chosen by the village high chief.

During a pageant, a fa’afafine or fa’afatama is chosen to take on the role of taupou because of their gender-fluid nature, which allows them to dance in a graceful and feminine manner and to use sexual comedy to highlight taboo subjects.

Taupou wear specific clothing, usually an ‘ie tōga, which is wrapped around the body, alongside an ula nifo, a whale-tooth necklace, usually reserved for chiefs and their offspring. Today, they also carry a nifo’oti, a large club modelled on a cane whaling knife.

How does this compare to Western gender categories?

It is difficult to classify the Samoan genders in Western cultural terms. These societies often misuse or do not fully understand categories such as transgender, homosexual and transvestite, all of which were created to classify males and females. Samoans reject many of these terms; fa’afafines and fa’afatamas identify as separate genders. They cannot be termed homosexual, as in addition to having a separate gender identity, they have a varied sex life which may be with another man, woman, fa’afafine or fa’afatama. Within Samoan society, tolerance of all individuals and their likes, dislikes and choices is very important, and children are not pushed to conform to particular gender roles in the same way that Western children generally are.

The book Memoirs of a Samoan, Catholic, and Fa’afafine (2007) is a valuable read for a better understanding of fa’afafine life in Samoan culture. It tells the story of Vanessa, a fa’afafine born to Catholic missionary parents, and his upbringing in the American Samoan Territory of the United States, close to Samoa. During these years, he outlines his struggle to come to terms with his sexuality and gender, and the ways in which he contributed to society.

There is also a book called Samoan Queer Lives (2018) by Dan Taulapapa McMullin (himself a fa’afafine) and Yuki Kihara, which contains autobiographical stories from the 1940s to today from fa’afafines.