Best Things to See and Do in Samoa’s Capital City, Apia 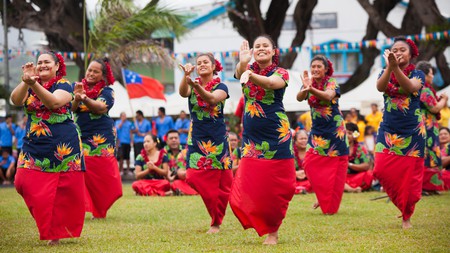 The Samoan capital city of Apia offers a great variety of things to see and do, keeping travellers to the South Pacific island entertained all year round. Try the cuisine, witness the local entertainment and take home some unique souvenirs from one of Samoa’s traditional flea markets.

Apia is located on Samoa’s main island, Upolu. Its tropical climate provides visitors with plenty of good weather in which to enjoy the traditional food, culture and scenery. While there are plenty of water-based activities on offer in Apia to help cool you down, there are also loads of indoor activities to keep everyone entertained.

The local people are friendly and welcome visitors with open arms, so touring the city is always relatively stress-free. Travelling around Apia is affordable, with taxi rides around the city costing £3 or less, and bus rides as little as £1.

Discover the real Samoa in the heart of Apia

A visit to the Samoa Cultural Village is free and, as travel writer Hayley Lewis explains, it’s “an amazing introduction to Samoan culture and traditions”. Tours run on Tuesdays, Wednesdays and Thursdays from April to October and on Thursdays from November to March. The tours last two hours; starting at 10.30am with a welcoming kava ceremony followed by an observation of an umu preparation (a traditional cooking method using a stone oven). Visitors also get the chance to witness the receiving of a Samoan tatau (tattoo) and the making of siapo (tapa) cloth. There’s also a chance to learn about traditional carving and enjoy Samoan singing and cultural dancing while sampling umu.

Located on the outskirts of Apia is a well-known natural water slide. The walk down to the sliding rocks is relatively steep and sometimes slippery on wet days, but those who venture down are rewarded with a refreshing dip in the Papase’ea falls. This is a great spot for social media photo ops. Locals flock here to enjoy the water slides too, and some Samoans are quite traditional, so be mindful when choosing your swimming attire.

Join the Samoan party at a fiafia show

Turn up the heat with a siva afi night

Tanoa Tusitala Hotel is the home of Samoa’s greatest siva afi (fire dancing). The show is put together by Siva Afi Entertainment, who have been teaching Samoa’s youth the art of fire-knife dancing for over 22 years; some students have even gone on to compete internationally. Travellers are in for an exhilarating experience of fire-knife twirling, throwing, catching and dancing with a war club. Like many such nights in Samoa, Tanoa Tusitala’s fiafia night offers spectators a traditional feast before the excitement of the siva afi begins.

Interact with locals at one of Apia’s markets

Boasting vibrant stalls with a range of local cuisine, handicrafts, traditionally patterned clothing and local produce, Samoan markets have become a holiday highlight and a must-do experience. Pick up some great holiday bargains and souvenirs and sample local food such as taro, breadfruit or raw fish in coconut cream. A stroll through the markets is also a great way to experience the everyday culture of Samoa and meet the locals.

According to Robert Oliver, the 2010 winner of the Gourmand Best Cook Book award for Me’a Kai: The Food and Flavours of the South Pacific, “The Samoan capital of Apia is the culinary mecca of the region, serving some of the best local food.” Many restaurants in Apia have effectively integrated Samoan traditional food with contemporary styles of cooking, making wining and dining in any of Apia’s restaurants a unique and delicious experience. The beauty of Apia’s cuisine, as Oliver points out, is that it can be enjoyed while gazing at the city’s spectacular harbour and scenery. Recommended venues include Paddles, Giordano’s, Nourish Café, Milani Café, Amanaki Hotel, Scalini’s Restaurant, Bella’s Kitchen and Sinalei Reef Resort.

Since 1991, the Teuila Festival has become Samoa’s most celebrated annual event and one of the biggest cultural festivals in the South Pacific. The festival, named after the country’s national red flower, includes an exciting variety of events and activities.

Every September, thousands pour into the capital city as the Teuila Festival showcases five days of the best of the country’s music, dance, foods and crafts. Throughout the week there are other events to keep visitors and locals entertained, including the Police Band flag raising, Miss Samoa pageant and canoe racing.