Adventuring In Niue: An Introduction To A Pacific Wonderland

Niue, a small Pacific island sandwiched between Tonga and Samoa, has long been the lesser known of tropical paradise islands. With a rich history and a welcoming local population, Niue is finally warming to the idea of tourism, attracting travellers looking for eco-friendly and adventurous cultural holidays. 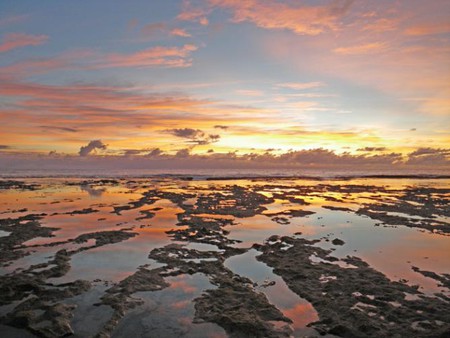 About 800 years after Polynesian voyagers first discovered the Island of Niue, Captain Cook sighted it in 1774. After initially naming the island after Prince Frederick of Great Britain, Cook received a hostile reception where musket fire and spears were exchanged, resulting in the immediate renaming of the landmass to Savage Island, a name that stuck for about a century. 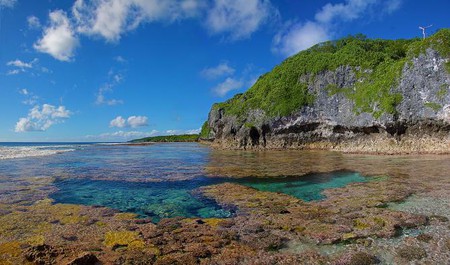 After over a decade’s worth of attempts, missionaries from the London Missionary Society finally got a foothold in the country in 1846. While converting most of its population to Christianity, the missionaries administered the island until it was annexed by Great Britain in 1900. Six months later it was handed over to New Zealand who administered it until self-governance in 1974. Niue, which colloquially means ‘behold the coconut’, is now a sovereign country in free association with New Zealand, which maintains its recurrent budget and defence while allowing Niueans to enjoy New Zealand citizenship. 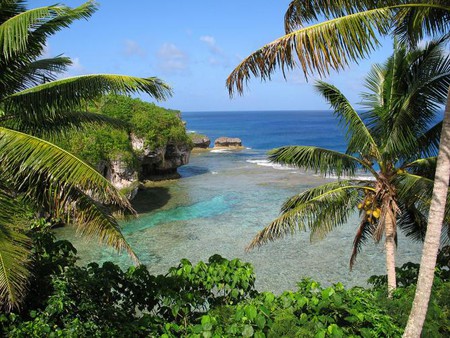 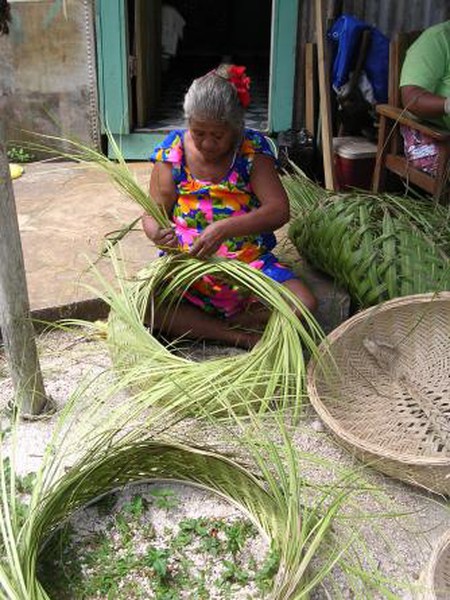 The island is situated in the middle of the triangle made up by Tonga, Samoa and the Cook Islands and is one of the largest raised coral islands in the world. While sharing the same tropical climate as its neighbouring islands, Niue’s unique geography makes it quite different to the familiar imagery of sweeping, coconut fringed beaches seen in tourist brochures and postcards. It has a narrow fringing reef of various widths which runs up against 15-metre high cliffs onto a 50-100 metre wide terrace where most of Niue’s 14 villages are situated. Beyond this terrace the land rises 25 metres up onto a vast hinterland plateau covered in scrub, bush gardens and pristine tropical rainforest.

What Niue lacks in sandy beaches it gains in these easily accessible coral reefs, which are strewn with crystal-clear reef pools and numerous secluded sandy coves. The cliffs that buttress the reefs are dotted with huge caves and chasms, often themselves containing large pools of clear water populated by a plethora of tropical sea life. The forests and bush gardens of the upper plateau and coastal terraces are interlaced with roads, paths and tracks some leading down to remote reefs, chasms and coves. 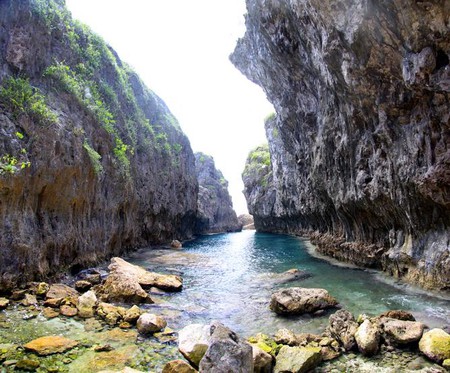 The country’s unique geography is also reflected in the idiosyncratic nature of its people. Unlike nearly all other Polynesian cultures, Niuean society has been moulded by its isolation and the fact that it is a single island while most others are archipelagos. While most Polynesian societies are hugely hierarchical, Niue’s is quite pronouncedly egalitarian. This cultural predisposition can be experienced every day while walking in villages and encountering smiles that are genuine (in contradiction to Captain Cook’s encounter). 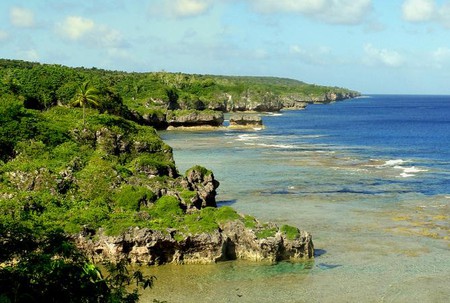 In recent years, Niue has opened up to tourism, but in a controlled manner which stresses the need for cultural and environmental sustainability. The unique nature of the island and culture themselves are controlling factors because they don’t attract the normal tourist associated with tropical island get-aways. Niue is a paradise though, but one that attracts the eco-friendly and adventurous and with a permanent population of about 1,200, there are no crowds. 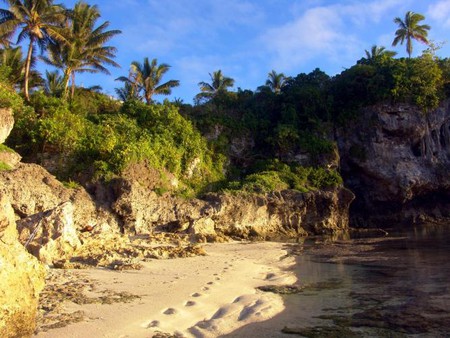 With a variety of accommodation, from backpacker hostels to a 4-star hotel, here is what Niue has to offer the visitor.

Niue’s fishing and diving is world class and with the immediate deep drop off, you don’t waste time travelling to the fishing grounds and divers’ haunts. Whale and dolphin watching has also been popular although it should be noted that whale encounters have dropped off in the last two years so coming to Niue specifically for this is something of a lottery these days; you might strike it lucky and swim with the whales (what many people say is a spiritual experience), or you might not see any at all. If you are out of luck there is a good chance that you will get to swim with the dolphins as second prize. Without the need to get on a boat the in-reef pools offer safe snorkelling and for the more adventurous, there is plenty of access for snorkelling over the reef experiencing the limitless deep Pacific in what many say is the clearest water in the world.

If it’s the rainforest you are into there are many coastal sea tracks to wander through, particularly on the rugged east coast where the tracks meander down through exquisite natural rock gardens of pristine forest and fern. Some are easily navigated and for others you’ll need guides. The largely flat plateau is ideal for cycling and offers a rare opportunity to travel through lowland rainforest, which is almost extinct in the rest of the Pacific. You may also be able to arrange to go hunting the ubiquitous nocturnal uga, the giant coconut crab. If you are of a creative ilk, go to the Hikulagi Sculpture Park in the Eastern rain forest and add your little (or not so little) creation to the monumental assemblage sculpture there. 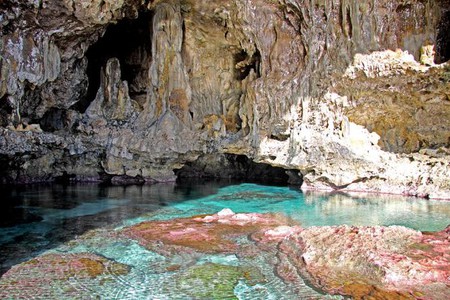 Niue also has several fishing tournaments each year which attract fishing fanatics from all over New Zealand. One of these is a women’s only event where visitors can compete with the skills of the local women. If you are not one for fishing you may be interested in observing and even partaking in a women’s weaving session and if your visit falls on the right week, you will be able to enjoy all the events of a village show day or a hair cutting or ear piercing ceremony, a coming-of-age event unique to Niue.

There are a several restaurants offering buffets of local cuisine cooked in the traditional earth oven. You may have the opportunity to feast on giant coconut crab, sea snails, pigeon or fruit bat along with an array of tradition root crops and forest plants. There are also restaurants offering European, Japanese and Indian cuisine.

These are just some of the attractions that visitors can experience in Niue, but what makes Niue different to its neighbours is that all these activities can be reached within a 40-minute drive from any point on the island. This means that whatever you are interested in doing, you don’t waste time travelling for miles to do anything; it’s right at your door step. 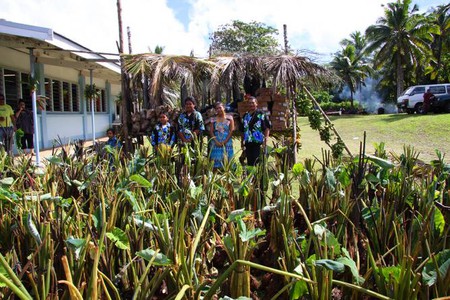 Except for the passing flotillas of yachts during the winter months, the only way to get to Niue is on Air New Zealand flights from Auckland, currently twice a week.

Niue isn’t for everyone. It’s no beach frolic or nightclub bash. The rocks are sharp and you can get cut in Niue if you are not careful. The prerequisite for the Niue adventurer is a reasonable degree of fitness, an enquiring predisposition and an imagination. There is so much to do and see within the one hundred square miles of Niue and its surrounding ocean so be warned; you will leave disappointed if you only stay one week.