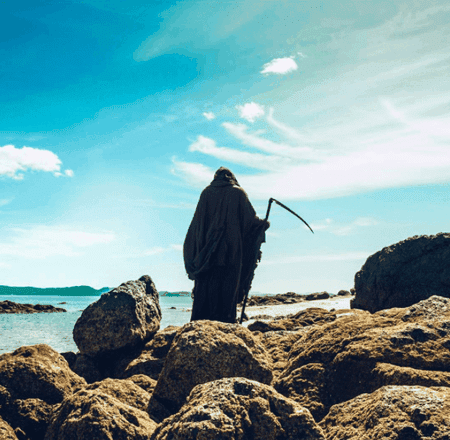 Swimming safety is NOT to be trifled with.

Even though what your mum said about not swimming for an hour after lunch ‘to let your food digest’ isn’t true, everybody from toddlers to grannies should be careful about not running beside the pool.

There’s now an extra incentive for those who might get overexcited at the sight of water and dive right in without a second thought, however. Enter The Swim Reaper.

He also might provide a cure for those with travel-induced envy, who are sick of watching their friends float languidly round infinity pools while they’re stuck at the office.

The social media-savvy wraith, whom one can only assume is a relative of The Grim Reaper, hails from New Zealand. He can be seen on Instagram hanging out on picturesque beaches, eating ice cream and floating around flamingos like any self-respecting millennial influencer would.

The difference is that his goals are to reap the souls of the living rather than reaping Instagram likes.

By scaring the foolhardy into taking more care around the country’s ample beaches and lakes, it’s hoped that they’ll be fewer injuries and serious incidents in the water.

Water Safety New Zealand say that around 105 people die each year from water-related deaths, with 56 having died already this year. A large majority of those were young men swimming while drunk.

His messages include ‘TLC are all like “don’t go chasing waterfalls” but I’m like “Jump off them! Don’t check under the water first!” and ‘Make a dumb move in the water and I’ll come in like a wrecking ball. #mileyforpresident2020’.

Watch out in the water. If you’re not careful, The Swim Reaper will scoop you on that Instagram post and then scoop the soul from your body when you fall off your pool float in anger.