As you might expect from a country that was home to one of the two men to first scale Mount Everest – the late but ever so great Sir Edmund Hillary – New Zealand is occupied by people who love a good walk. And why wouldn’t you, when you’re surrounded by some of the most arresting landscape on the face of the planet? Here is our guide to the good old Kiwi pastime of tramping.

Basically, it’s going for a hike. However, it’s a pretty mercurial term, and like a lot of New Zealand idioms it can refer to more than one type of walk. For instance you might have a mate who asks you whether or not you fancy going for a tramp at the weekend, and that could mean anything from heading up into the local hills in Taranaki or going for a serious trek to the summit of Mount Cook in the South Island. The thing with tramping is that the devil is in the details, so if a Kiwi asks you whether you fancy going for a tramp make sure you ask exactly what they’re talking about – and whether this tramp will be completed in one hour or involve packing oxygen bottles. 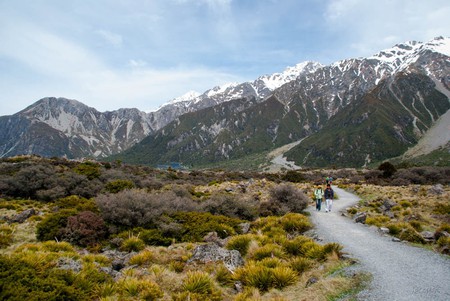 A brief glossary of slang associated with tramping

Tiki Tour: Take a long scenic route to get to your destination.

Yeah-nah: Technically means no, but in a vague, inoffensive and non-comittal way. If you were to ask someone, for instance, whether they wanted to go for a tramp and they answered, ‘Yeah-nah’, you can translate that as, ‘Thanks for asking and I can see the appeal in that idea, but I can’t be bothered / have other plans’. 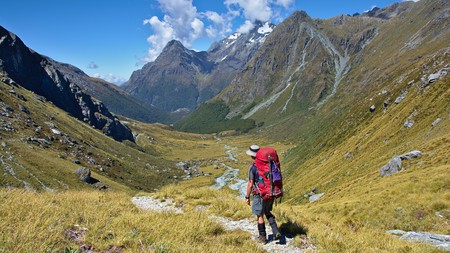 Scroggin: Also known as trail mix, a collection of nuts and raisins used as a snack for a tramp / hike. An absolute essential when it comes to packing for a decent stroll.

Wop-wops: The arse-end of nowhere. The boonies, out in the sticks or the back country would be other terms for this slang referring to a remote location. If a New Zealander says to you whether you fancy a tramp in the wops, you can be pretty certain you’re going to want some sturdy boots and a backpack filled with scroggin. 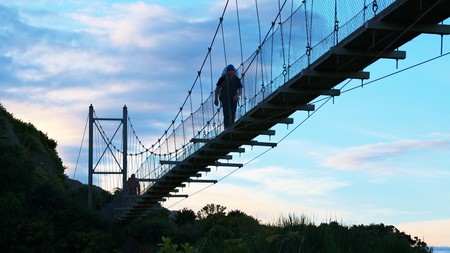 Knackered: Extremely tired. Can also be substituted for a number of juicy expletives.

Hard case: Someone who has a big personality and may do unusual things, but basically is a real laugh. You’ll find plenty of these in the wops. Farmers and trampers with names like Runny Dave, John ‘No Nose’ Tozer or Fish.

Crook: Feeling sick or under the weather. Common after an excess of scroggin.

She’ll be right: This pretty much sums up the Kiwi attitude to life. It’s the New Zealand version of hakuna matata. It means ‘don’t worry, the chances of something bad happening aren’t that high, and even if something bad does happen, it’s nothing we can’t handle; it’ll all turn out all right in the end’. So don’t stress. This is exactly the sort of thing someone says when you’re in the wops and realise that you’ve just passed the same rock formation you went past an hour or so ago. After you’ve asked your friend and guide whether he knows where he’s going – and he replies with a dignified but bemused ‘Yeah-nah’ – there will be a tense, thoughtful silence which will then be broken by somebody saying, ‘She’ll be right’.

New Zealand is world-famous for its incredible and varied landscapes. Arguably the best way to immerse yourself in this country is on foot as nothing gives you the time to enjoy the scenery as much as walking. The world becomes a lot more tangible when you’re breathing the air, feeling the mist on your face, brushing through the rainforest or listening to the waves breaking as you crest a dune. Walking elevates a breathtaking view into an experience. So, whereas it might be a bit strong to say that tramping is an activity unique to NZ, this spellbindingly beautiful island sure does have the goods when it comes to going for a world-class tramp in the wop-wops.