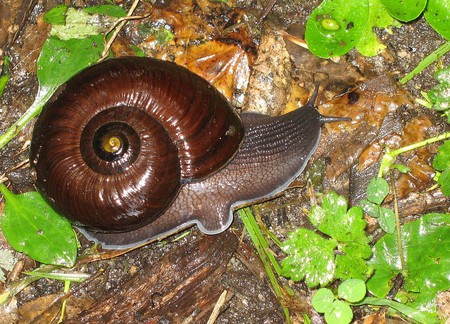 Slithering in the depths of New Zealand’s native forests is a giant carnivorous snail quite different to those teeny little critters you’ll typically find gnawing the leaves in your backyard. The Powelliphanta are huge, they’re ancient … and if you don’t like your writhing gastropods, they’re outright terrifying.

Don’t confuse these with the common garden snail: in New Zealand those are introduced species, hailing primarily from Europe. Powelliphanta, on the other hand, have called Aotearoa home for some 200 million years and are among some of the oldest carnivorous land snails on Earth.

Originally it was believed the Powelliphanta was a subgenus of the native Paryphanta (also known as the kauri snail), which are only found north of Auckland. In the 1970s, the Powelliphanta was discovered to be a genus in its own right – as such, the snails were renamed after Dr A.W.B. Powell, a scientist at the Auckland Museum who spent a greater part of the 1930s and 1940s studying these curious nocturnal beings.

There are 16 known species and 57 sub-species of Powelliphanta scattered all over the country. The snails are quite prone to dehydration and naturally prefer to base themselves around moist, high-altitude environments. The biggest Powelliphanta can be found in Kahurangi National Park, near Nelson, tend to be nine centimetres (3.5 inches) in length and weigh up to 90 grams (3.17 ounces). For those who have an affinity for New Zealand birds, the Department of Conservation likens their weight to that of a tui.

Nelson and the West Coast of the South Island are where these snails are most abundant; in the North Island, they’re mostly confined to the mountains in the central region, Mt Taranaki and the Horowhenua plains.

But don’t be fooled into thinking these creatures are all brutes. If anything, some of them are quite beautiful. Their glistening shells are known to come in a variety of patterns and hues, including vibrant shades of red, brown, yellow and black. Their eggs also have a hard, pearly-pink shell that’s quite similar to that of a tiny bird’s egg. 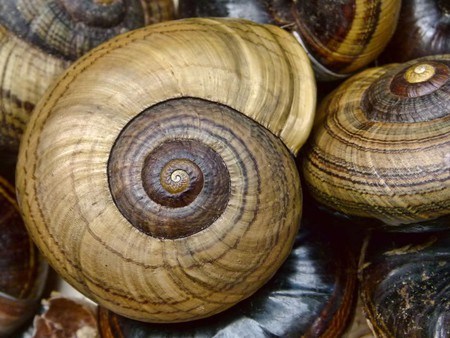 Speaking of eggs, Powelliphanta lay five to 10 of these a year, measuring approximately 12 millimetres (0.47 inches) in length. The snails are known to live up to 20 years – much longer than many of their counterparts, native or otherwise. Powelliphanta are also hermaphrodites, meaning they have both male and female reproductive organs and can easily mate with any member of their species as they wish.

Even if the idea of seeing these massive animals in their natural habitat makes you squirm, the Powelliphanta is somewhat of a local icon. Not to the same scale and prestige as, say, the kiwi bird – but the snail is a legally-protected species and was even featured in a New Zealand ‘Creepy Crawlies’ stamp collection released by New Zealand Post in 1997.

Collecting Powelliphanta shells has been also illegal since 1982. This law was essentially introduced to help preserve the snails’ natural habitats and protect them from extinction. Predation is quite a serious threat for the Powelliphanta, as native weka and introduced animals like pigs, rats, possums and thrushes are known to eat them.

The golden-coloured Powelliphanta superba prouseorum is currently at most risk of perishing, but the Department of Conservation‘s preservation efforts have managed to spare a handful of species from the worst-case scenario. Most notably, a decade-long recovery project successfully enabled the snails in Mt Augustus, near the West Coast town of Hokitika, to thrive in their natural habitat. Fencing and pest control initiatives have also helped protect some of the snail subspecies around Golden Bay in the upper South Island, particularly the Powelliphanta gilliesi brunnea, which saw a doubling in population size between the years 2001 and 2003. 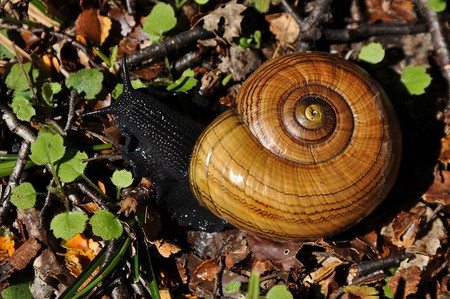