This spectacular underground light show in New Zealand is one of the best natural attractions in a country known for its outstanding natural attractions. The source of the magical illuminations in the caves of Waitomo, however, come from an unlikely place.

Accessible via a relaxing boat ride, the Waitomo Caves have been 30 million years in the making. They have been an attraction for visitors for almost 130 years, gaining a reputation for cultural and historical significance.

The lack of sunlight inside the grottos make the glow-worm lights appear like a series of stars against the backdrop of a night sky. Known as the Arachnocampa luminosa glow-worms, the tiny creatures radiate an unmistakable luminescent light and are unique to New Zealand. Waitomo comes from the Māori words for water (Wai) and hole (tomo) giving visitors a strong clue as to what lies beneath the green hills of the region. 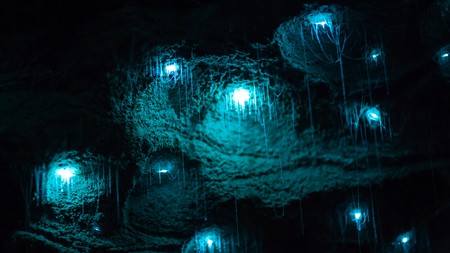 The caves below also feature sinkholes and interconnected underground rivers, which are only reachable with the assistance of an experienced guide. For the more adventurous tourist, there are black-water rafting experiences as well as zip line trips into the dark.

Many of the guides are directly descended from the first Māori chief to discover the caves and bring them to the attention of the rest of the world in 1884. The more narrow caves and passages are so confined they have to be constantly monitored for carbon monoxide levels, which can build up if visitor numbers are too high.

The largest area is known as The Cathedral and has seen live concerts and musical performances due to the excellent acoustics in the cavernous space. The Waitomo Glowworm Caves Visitor Centre is an excellent attraction itself, having won architecture awards for its sustainable design.