These Are the Most Spectacular Glow Worm Caves in the World 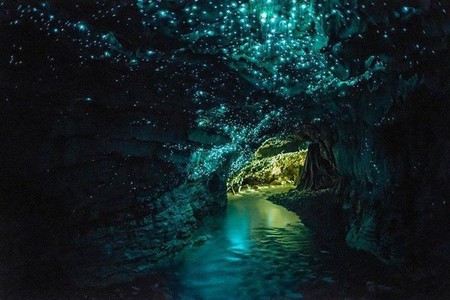 Glow worms, typically found in New Zealand and Australia, cover cave ceilings and undisturbed woodland areas where they hunt for prey using their alluring blue glow and a long thread of sticky web. As they fish for food, glow worms create an astonishing sea of starry lights. Below are the top 10 glow worm caves, forests, and grottos you don’t want to miss.

Don your helmet and grab your flashlight for a tour along the Waitomo Cave, possibly the best place to spot glow worms in the world. Located on New Zealand’s North Island, visitors will venture 150 feet underground to witness hundreds of thousands of these shining insects lining the ceilings of the 30 million-year-old limestone caves. The Arachnocampa luminosa glow worms survive in the cave by spinning a silk nest from the ceiling and lowering a thread down to fish for their prey. The roof of the cave is a breathtaking sight dotted with brightly glowing specks like a sky full of stars. 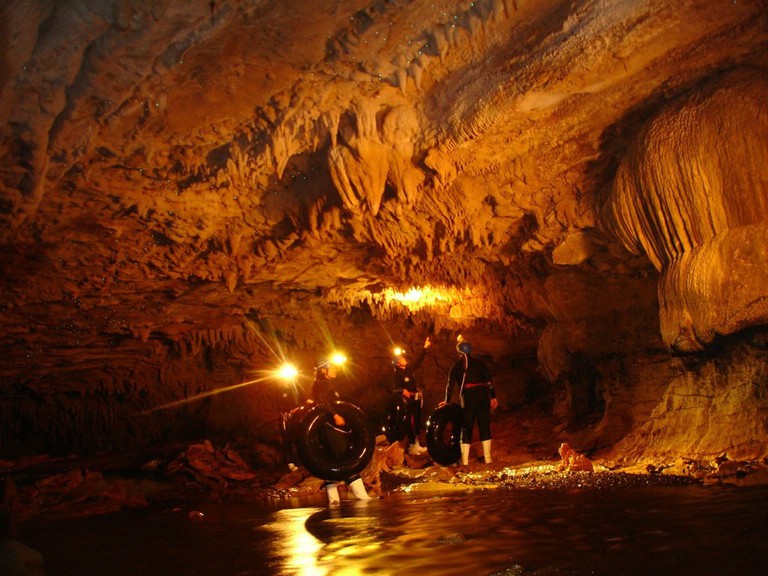 The Te Anau caves are young, around 12,000 years old, and the limestone walls are still being carved by the river today. Lawson Burrows discovered the caves, which were thought to be lost in legend, in 1948. The two hour and 15 minute tour includes a cruise across Lake Te Anau before leading visitors through the narrow passageways and into the glow worm grotto. The small boat glides through the caves during the day or night, allowing visitors to view the spectacular sparkling ceiling. The caves are located on the South Island about a two and a half hour drive from Queenstown. 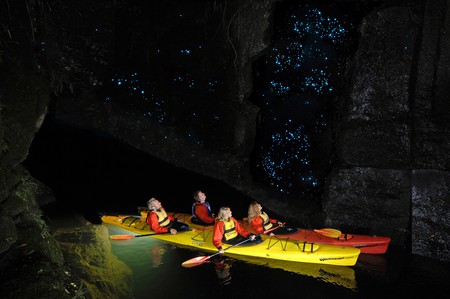 If America is more accessible than New Zealand or Australia, visit Alabama’s Dismals Canyon to see the North American Ofelia fultoni, nicknamed Dismalites, light up the darkened forest and caves with their blue-green glow. The glow worms are visible in the spring and summer on night-time tours through the Dismals Canyon. Like their cousins in the Pacific area, Dismalites use their blue-ish glow to attract food to their sticky webs while in their larvae stage. 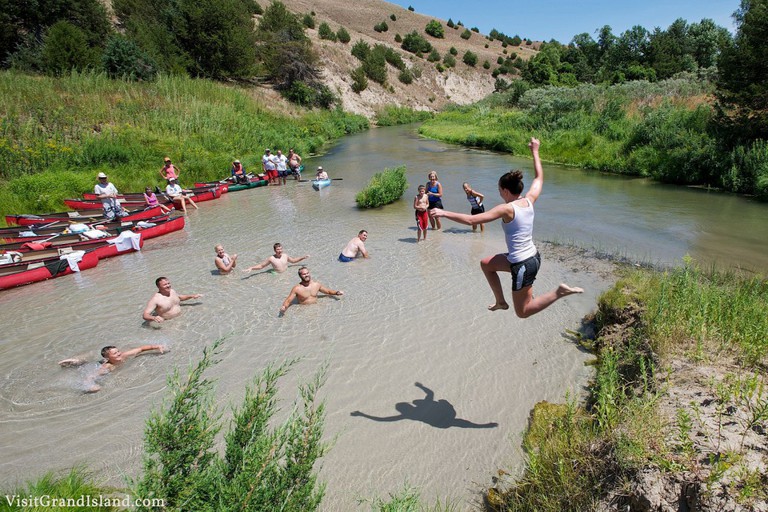 Park
Facebook
Email
Twitter
Pinterest
Copy link
Share
Map View
Visit Australia’s Great Otway National Park to view small clusters of glow worms without the hassle or expense of a tour. When outside of caves, the glowing larvae tend to reside in dark, humid spots, like soil banks with overhanging ledges or along creek embankments. Be mindful of loud noises and don’t shine lights directly on the glow worms or they will hide their lights. The shimmering beauties can usually be found at Melba Gully or near the Grey River Picnic Area at Kennett River. Because you’ll be exploring in the wild and not on a designated glow worm tour, sightings of the bright creatures are not guaranteed.
Open In Google Maps
Victoria, Australia
+61131963
Visit Website
Give us feedback

Springbrook National Park is made up of four sections, visit the Natural Bridge section for the best glow worm views. Explore the area’s spectacular waterfalls by day, and by night look for the gorgeous blue lights speckling the rocky overhangs and ceilings. The humid temperatures and dense canopy make Springbrook a perfect habitat for the glowing insects, one of eight species of glow worm living in Australia. The best time to visit the Natural Bridge to see the glow worms is between December and March at night-time. 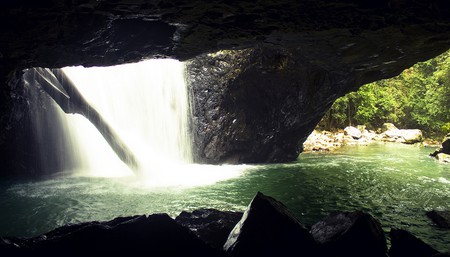 Enter a small sea of glowing lights on an evening walk in Hokitika’s Glow Worm Dell. This outdoor gathering of glow worms can be found here year-round. The entrance to the sign-posted walk is located across the street from the Shining Star Beachfront Accommodation and is only a walk of a minute or two from the road. Enjoy a moment of silence under the brilliant glowing canopy, this site is off the tourist trail, so it’s likely you won’t encounter large crowds. Just remember not to shine your lights on the insects. 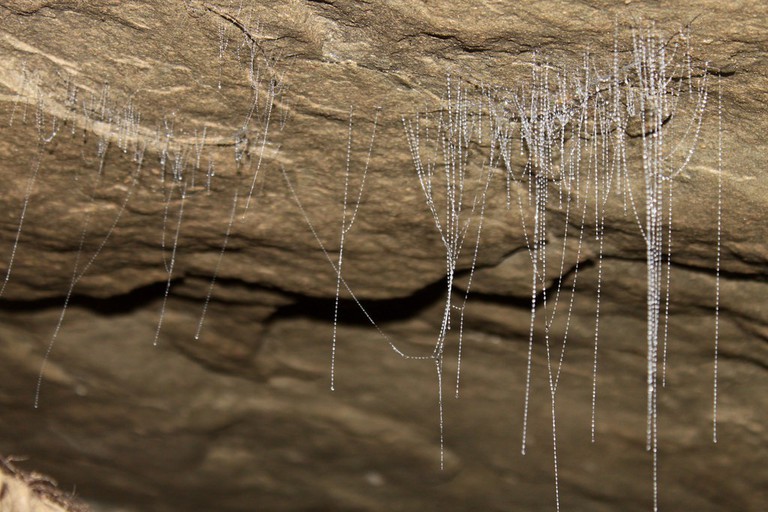 Visit this centrally located garden in the capital of New Zealand for a fantastic look at glow worms without leaving the comforts of the city. See the glow worms located on the overhanging banks of the hills from the paths in the Main Garden, from the Duck Pond up to Glen Road along the Pukatea Stream. The Botanic Garden is free to enter and houses an exquisite array of protected native forest and wildlife. The best time to see the glow worms is at night in the spring after it has rained. Check the events calendar to see if any guided tours are running. 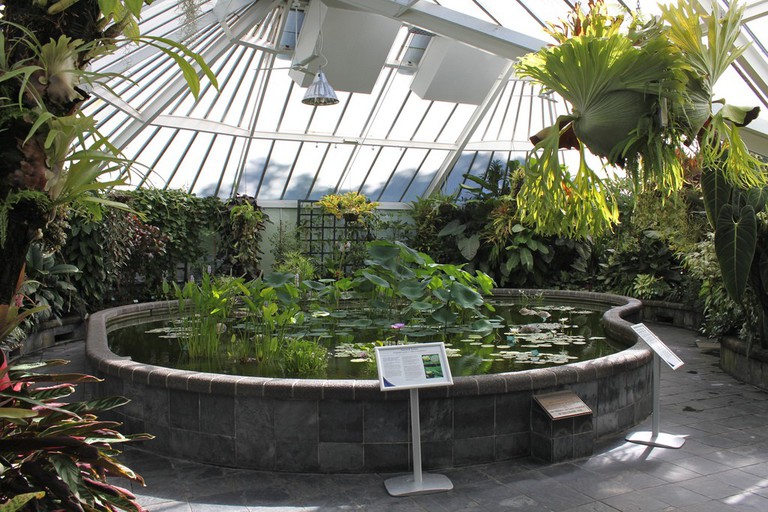 This unique venue for glow worm watching is a disused, 400-meter-long railway tunnel on the Newnes Plateau in the Wollemi National Park. The train line, which formerly ran to Newnes Kerosene Shale Works, hasn’t been used since the 1940s. Today it lights up with the cool blue hue of thousands of glow worm larvae who have reclaimed the man-made structure as their own cave. Be sure to bring a flashlight and good walking shoes for the walk through the tunnel. 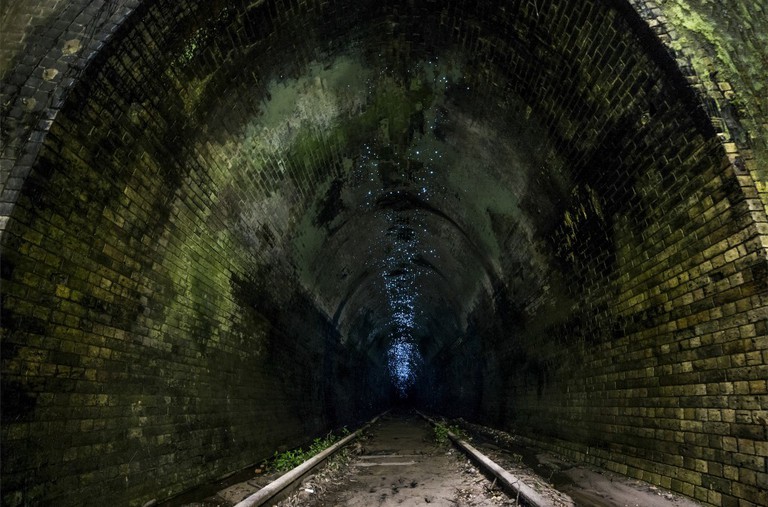 As Australia’s climate becomes hotter and drier and as humans destroy rainforest areas, glow worms are restricted to fewer and fewer areas on the continent. The glow worm cave at Mount Tamborine in the Gold Coast Hinterland was purpose-built to provide a homey atmosphere in which Australia’s glow worm population could thrive. The realistic cave is a controlled environment complete with stalagmites and stalactites, water features and flow stone. Daytime tours are offered for guests to learn more about these fantastic creatures.

Enjoy a 20-30 minute walk through lowland rainforest to the beautiful glow worm grotto of Fox Glacier. Throughout the walk along a trickling stream, visitors will be exposed to many types of forest trees, ferns and mosses before finding the stunning sight of the mystical glowing lights from up above. Minnehaha Walk is free of charge and is suitable for families and wheelchair access. 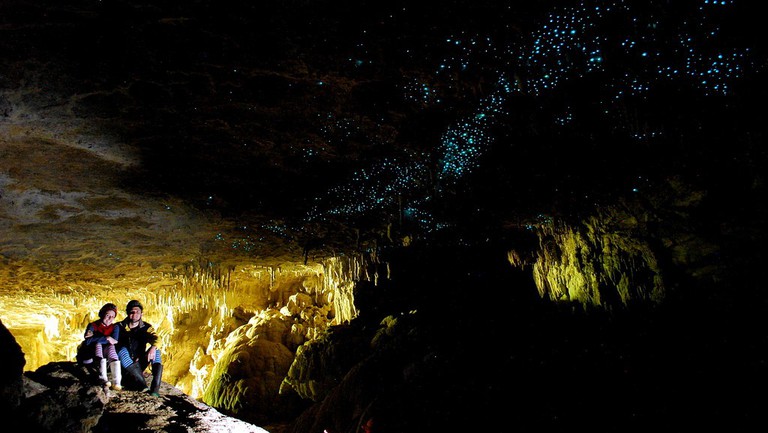