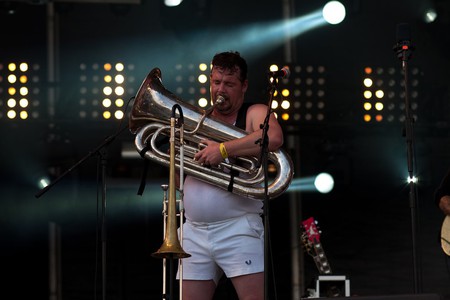 New Zealand is a multi-faceted jewel of a country — and not just with regard to the knockout scenery, which is what it has mostly become synonymous with. It has a rich, layered culture and variety is very much the spice of Kiwi life. This being said, there is one genre of music that perhaps mirrors the laidback attitude and sunny dispositions of this island nation’s inhabitants more accurately than any other — New Zealand Reggae. This variation on the classic reggae genre is claim to some of the most accomplished and acclaimed artists in New Zealand music. Take a look at our guide and prepare your toes for tapping and heads for bopping.

Grooving straight out of the middle of the North Island, Hamilton, band Katchafire — or Katchies as they’re affectionately known by many Kiwis — emerged onto the New Zealand music scene in the year 2000 as a Bob Marley tribute band. From these humble beginnings, this classic roots band has now been billed alongside those who they originally set out to emulate, such as The Wailers, UB40 and Lauryn Hill. They have toured all over Europe, the United States, Brazil and Australia and are a regular venue in most cities and towns around New Zealand through the summer months. The only advice we can give you is that you should catch them if you can.

Celebrating their 25th birthday in 2018, the Dubbies have been on the circuit for a good long while now. They’re an eclectic band, not only containing themselves to a strict reggae genre but dabbling in and around dub, drum and bass and roots music too. This has seen them evolve into one of the most unique and, in a way, distinctly Kiwi-sounding bands ever to raise their heads out of the Aotearoa grass. They’ve released nearly 30 albums, EPs and singles in their quarter-century career and introduced New Zealand solo artist Tiki Taane to the world, after nurturing him in the band. Whilst some of their music can stray into the darker dub side of things the message is always hopeful.

The Black Seeds are one of the bands on this list that is an absolute joy to see play live. All of the artists in our top 10 are fantastic to see strut their stuff, but The Black Seeds really come into their own when they’re on stage and produce some of the strongest performances that you’re likely to see when watching a Kiwi band live. They formed in Wellington in 1998 and play with eight band members, which gives them live performances and an electrifying vibe. With ex-members including the highly talented Bret McKenzie of Flight of the Conchords fame, it’s not surprising that 20 years down the road these guys — fronted by Barnaby Weir — are still delighting crowds all over the Antipodes and the world.

Fly My Pretties are New Zealand’s foremost and favourite band of collaborative musicians. The whole idea of getting together a bunch of talented and like-minded musicians arose in 2004 when Barnaby Weir (front-man of the Black Seeds) and Mikee Tucker (from Loop) decided what the world needed was a selection of the most exciting local musicians combining their power to produce scintillating shows set to captivating visual backdrops. The band is naturally ever changing, but some of the previous members include Hollie Smith, Anika Moa, Fran Kora, Mara TK, Lisa Tomlins, Tiki Taane and Justin Firefly Clarke — all of whom are incredible in their own right.

Fat Freddy’s Drop is a byword when it comes to unbelievable one-off shows and spellbinding displays of instrumental wizardry. This seven-piece, soulful, funky reggae band emerged from Wellington in the late 1990s, dazzled the capital and never looked back. They have a huge following in Europe — particularly Germany — and tour there often. Their mantra seems to be that no one show should ever be the same, and it is this skill, this freshness which accompanies every live performance, that has cemented them as one of New Zealand’s all time great bands. When you’re listening to one of their albums, that recording is a distilled, refined version of all the times they have played that song on the road.

Although this band broke up in 2005, they reformed again in 2011 — albeit without drummer Ricky Gooch — much to the delight of the New Zealand music community. They’re a talented bunch with all the members playing in other bands, some of which are featured on this list. Warren Maxwell — a member of Kiwi musical royalty — was a member of Fat Freddy’s Drop until late 2006 and is also the front man of Little Bushman. Rio Hemopo, the bassist, released some solo stuff and was also involved with Breaks Co-op. Riki Gooch, the drummer, has also released solo music under his own name and under the pseudonym Eru Dangerspeil and has played and produced work for many other artists and projects such as Hollie Smith, Neil Finn and Ria Hall.

This is a band that has played Glastonbury and Sziget festivals, and you don’t get an invitation to those unless you merit it and can be relied on to get the crowd moving, something Cornerstone Roots can definitely do. They’ve been doing this ever since their conception after a jamming session in 2001 at the infamous Raglan Musicians Club. Raw energy could be said to be the cornerstone of the Cornerstone Roots recipe for success.

Summer just isn’t summer in New Zealand without standing in a packed beer garden, a cold one in hand and the Kora gang doing their thing on stage whilst their music washes over you. They’re as much a part of summer as anything else in Aotearoa, and if you happen to be in town when they’re touring through, make sure that a ticket to the show is in your pocket. These guys never disappoint and will leave you humming their tunes when you wake up the next morning.

House of Shem has stuck very closely to the original reggae sound, not branching out too much into the other areas of dub or drum and bass, like some of the other bands on our list have. This meant that when they released their first album in 2008 in New Zealand, it was met with such an encouraging response that in 2009 they released it again in Australia and Hawaii. If you feel like whacking on a new incarnation of Herbs this summer, these are the boys.

Herbs is what one might venture to call a proper New Zealand reggae band, in the sense that they were conceived in the 1970s, have always been politically driven and have included members of Maori, Tongan, Cook Island and Samoan descent. If you want to hear an old-school band that truly encapsulates reggae music, not just in New Zealand, but in the Pacific, then look no further than Herbs.