The 10 Best Female Singers From New Zealand (That Aren't Lorde) 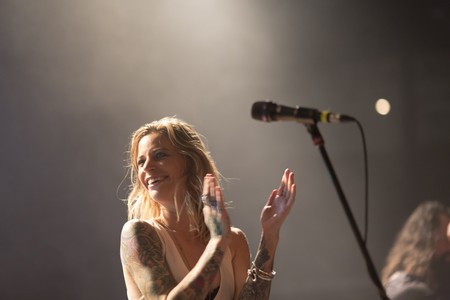 It can’t be denied that New Zealand music — and, in particular, female artists — have never had a more prolific impact on the entertainment industry then as of right now. This is due mainly to the massive popularity of Auckland-born Lorde, who has taken the world, as they say, by storm. However, she is just the latest in a long string of Kiwi ladies who have been belting out the tunes. Here are our top 10 that we think you should have a listen to.

Kimbra is a household name, not just in New Zealand, but all over the globe. She came to the world’s attention after working with Gotye on the absurdly popular and successful “Somebody That I Used To Know.” If YouTube hits are to be used as a yard-stick then that track should be a sign that Kimbra has done alright – it’s had over one billion plays… Yeah. Not bad, really, for a girl from Hamilton. She’s released two albums and her third, Primal Heart, is set to be released in April 2018. If you’re yet to listen to Kimbra’s music and want an idea of what she has in store for your eardrums, her influences include Prince, Bjork and Jeff Buckley.

Ladi6 is a Kiwi hip-hop artist who has a major following, not just in her homeland but around the world as well. She was born in Christchurch, in the South Island, and is of Samoan descent (her cousin, by the way, is Scribe). She toured through Europe in 2010 and 2011 and collaborated with a variety of New Zealand’s music royalty, including, but not limited to, Fat Freddy’s Drop, Jon Toogood, Shapeshifter, Fly My Pretties and The Opensouls. With three top 10 albums under her belt and one hell of a voice, it’s no surprise that she has been hailed as New Zealand’s answer to Erykah Badu.

Brooke Fraser was well established in New Zealand and Australia before setting her sights on the United States. The platinum-selling singer-songwriter, known primarily for her smooth, acoustic guitar songs and reflective, Christian-influenced lyrics, completely reinvented herself a few years ago. These days, her tracks continue to tap into the personal, but her sound is more influenced by electronic renditions. Fraser’s most recent single, “Therapy,” was released in late 2016.

Whilst classical music is not a genre that gets its fair share of mainstream coverage, there weren’t too many people a few years ago who hadn’t heard of Hayley Westenra. This young woman has quietly – or not so quietly, really – made herself a household name for those who love classical music. In 2003, her debut album, Pure, became the fastest-selling album in the UK classical charts ever. She has sung personally to Queen Elizabeth – on four separate occasions – and to Princes Harry and William. She has also performed at such major sporting events as the FA Cup Final, the Mercedes Cup in Los Angles and the Rugby World Cup Final in 2011 when the All Blacks went on to win the title. She’s also collaborated with movie soundtrack royalty, including the extraordinary Ennio Morricone.

This Auckland-born and bred singer had a tumultuous upbringing, which didn’t so much hinder her so much as propel her into making some absolutely beautiful music. When she was 16, her father sadly passed away from cancer, and the young Wigmore wrote a song called “Hallelujah” in which she tried to deal with her feelings. Her sister submitted this song to the US-based International Songwriting Competition in 2004, and Wigmore beat 11,000 songwriting aspirants from 77 countries to become the youngest and only unsigned Grand Prize winner in the history of the competition. Since then, she has released four solo albums and made herself very much a household name in her homeland.

Boy oh boy, you can’t help but sink into a bit of introspection when you chuck Bathe in the River by Hollie Smith on your sound system. This Kiwi soul singer has been treating your ears to a good time since she emerged onto the music scene in 2005. This was when she released her first EP, but before that had been singing with Trinity Roots — a New Zealand reggae band with a huge following. She has collaborated and toured with some of the biggest artists to come out of NZ including Bic Runga, Fat Freddy’s Drop, Anika Moa and Electric Wire Hustle. If you ever get the chance make sure you try and catch her performing at a winery on a lovely summers day, she is fantastic.

Named after the 1985 film Ladyhawke by Richard Donner, Phillipa Margaret Brown busted onto the New Zealand music scene — as a solo artist — in 2008. Since then, she has released three albums, the first of which — Ladyhawke — secured her the Breakthrough Artist gong in both album and single categories at the ARIA Music Awards in 2009. Her other two albums, Anxiety and Wild Things were released in 2012 and 2016. She takes her influence from 1980s and 1990s music as well as the music from Japanese video games.

Christchurch seems to churn out the musical talent on a fairly reliable basis, and Anika Moa is another prime example of the quality that the Garden City seems to nurture. She’s been nominated and won a host of New Zealand Music Awards, including Top Female Vocalist, Songwriter of the Year and Best Female Solo Artist. She spent time recording an album in New York but became disillusioned with how she was being marketed in America. She returned home afterwards and earned a lot of recognition for her album, Thinking Room.

Bic Runga is one of those incredibly talented individuals who can play a host of instruments and has the voice of a nightingale. She cracked the NZ music scene at the tender age of 20 with her acclaimed album, Drive, which was released in 1997. Her music has made it overseas and into such (now) classic movies as American Pie. She has legions of fans all over Europe and Asia thanks to her phenomenally popular track, “Sway.” In January 2006, The Queen made Runga a member of the New Zealand Order of Merit in the New Zealand New Year’s Honours List.

MC Tali is by far and away the most accomplished female MC to ever come out of New Zealand. She takes her influence from the drum ‘n’ bass scene. Her track “Lyric On My Lip” made it to no. 37 on the UK singles chart, something not to be sneezed at when you consider the caliber of the competition in the United Kingdom. She describes her own style as “electronic soul meets gangster jazz,” and she is really one of only a handful of female MCs in the world. Not only is this talented woman a prolific entity in the music industry, but she has recently been offered a book deal for a contemporary fiction novel that is based in her homeland of South Taranaki.