Speed Down the Rere Rockslides of the Waikohu River

There are many spots around the world where you can shoot down a natural water slide. But New Zealand’s Rere Rockslides might just be the pick of the bunch.

This thrill ride on the Wharekopae River, a tributary of the Waikohu, heads down a massive slab of smooth rock that looks more like a sports field than a chute, building up some serious speed. On sunny weekends, the slide’s tree-lined edge is packed with spectators, watching sliders descend on anything from boogie boards to inflatable furniture. 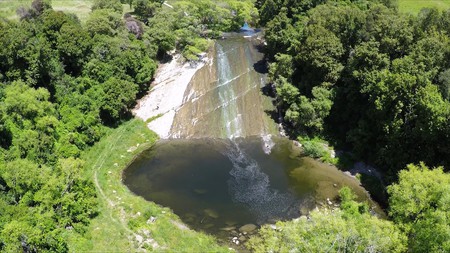 The secret of Rere Rockslides

The Waikohu River runs east from Huiarau Range on New Zealand’s North Island. Near the village of Rere, it encounters a feature that looks like it must have been engineered to give visitors an adrenaline rush – but is actually totally natural. This 60m (200ft) slab of rock is slanted at around 30 degrees, and the river runs straight down it, meaning its moss-covered surface is surprisingly smooth.

The result is an epic slide that’s increasingly popular. You can shoot down it on a boogie board (for the fastest ride), an inflatable mattress (good for a team descent), a blow-up boat (the most comfortable) and anything else that takes your fancy – doing it without a base is feasible, but you’ll be sore.

While riders can build up quite a pace, the pool at the bottom offers failsafe deceleration at the end.

Rere Rockslides is most popular on the weekends, particularly in the early afternoon, and can be deserted in the morning or midweek. When it’s busy, there’s a nice buzz to the place, with spectators and participants chowing down at barbecues and picnics on the banks, which are lined with lush foliage.

The slide is a 45-minute drive inland from Gisborne, and there’s a car park just a few minutes from the top – there are also toilets and picnic tables. The finish is around five minutes’ walk from there.

While the vast majority of people have no problems at Rere Rockslides, it’s worth being careful not to slip on the rocks along the way and getting familiar with the run on your first descent before you try anything too ambitious. If you’re all out of boogie boards and inflatable furniture, thick cardboard is a better ride than nothing – just take it and any other rubbish out with you.

Make a day of it

Once you’ve shot down a few times and had a snack on the bank, you could check out Rere Falls, 3km (1.9mi) downriver, where water tumbles down a 5m (16ft) drop – you can walk behind its watery curtain. Eastwoodhill Arboretum is a peaceful park with northern hemisphere plants just a 15-minute drive away, or you can continue east to Gisborne for great food and wine and some stunning beaches.